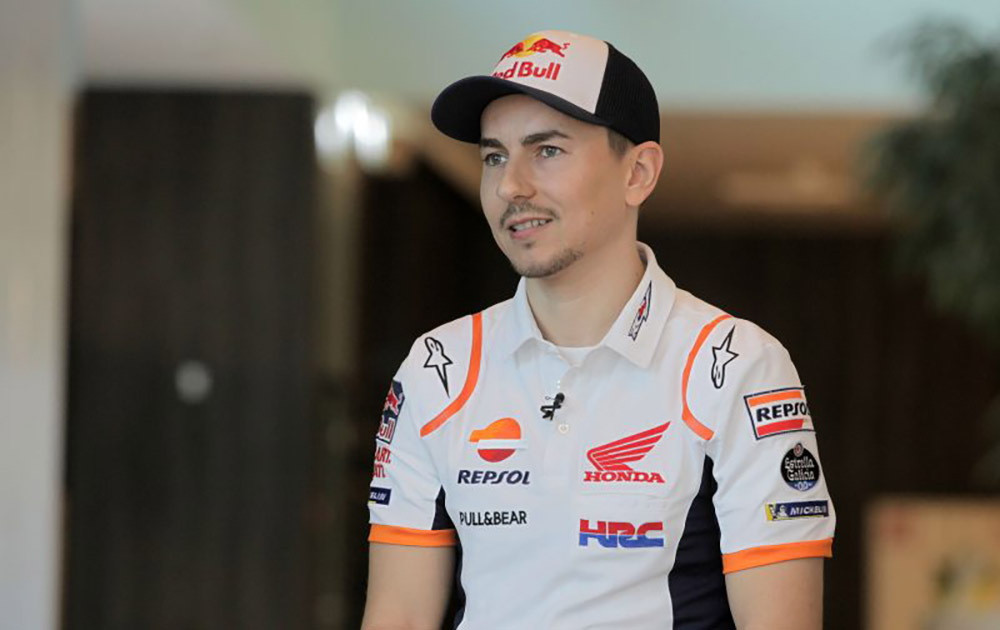 11 years in MotoGP™, winner of five World Championships, 282 races, 31 years old. Jorge Lorenzo starts a new challenge in 2019 when he joins the Repsol Honda Team. Just over two months before the season gets underway in Qatar, the Spanish rider gives his first interview to analyse his initial impressions of the Honda RC213V, talk about what it means to be part of his new team and outline his ambitions for the year.

“I like the colours. My favourite colours have always been white, red and black, and now we can add orange to that. They are colours that represent success, with many victories and many World Championships over the last 25 years. I am very proud to belong to this family and be able to contribute to making the team even stronger.”

What does it mean to you to belong to the Repsol Honda Team?

“Repsol Honda may be the most successful team in history. They have the most victories and titles. To compare them with a football team, they would be a Barça or a Real Madrid. There is no team with more titles and more importance worldwide than this one.”

What did you think the first time you tried your new bike?

“Last season I rode a completely different bike, that was very big and very tall. Maybe it was a little too big for me. The Honda suits me better in terms of its dimensions. It is more compact, a smaller and lower bike, with which I can lean over better. I felt a little more confident when entering corners, because the closer you are to the ground, the more confidence you have. The first impression was positive and I saw a lot of potential there.”

When you got off the Honda for the first time, you did so with a big smile. What did you think when you entered the Repsol Honda Team box?

“In those moments your expression speaks for itself. It’s all very exciting, very new and enjoyable. Also, if the initial feeling is good, you can tell even more from your expression.”

Changes have already been made between the tests in Valencia and Jerez. What were they?

“One of the things that impressed me most was the ability of the Repsol Honda Team to react, providing what you ask for. I was quite clear, Honda took note of all my indications and within a few days they had everything ready -and we had a fuel tank almost one hundred percent to my liking.”

You said you were going to learn from Marc Márquez, but that he would also learn from you. What do you think Marc can offer you and what can you provide for him?

This year the Repsol Honda Team turns 25 and Repsol reaches 50 years sponsoring sports. What does this mean to you?

“25 years is a long time. When Repsol began sponsoring the Honda team in 1995 was when I started watching motorcycle racing on television. I remember the fights between Harada and my idol Max Biaggi in 250cc, but also 500cc tussles between Crivillé and Doohan, when Rossi signed for Repsol Honda and when Nicky Hayden won the World Championship in 2006. It’s a very successful team, with many victories and world titles, and now I will have the honour and pleasure of being able to belong to it. 50 years is an extremely long time. I think that Ángel Nieto was one of the first sportsmen who Repsol sponsored. He was the first in Spain, and the person who boosted the sport in this country. It’s amazing that Repsol were there supporting him at that time.”

The team presentation is on the 23rd of January in Madrid. Is it a day filled with a lot of anticipation?

“The presentation will be very special for me. I think it is generating a lot of expectation because combined we have twelve World Championships and many victories. Above all, there is a lot of talent and a lot of speed within the most decorated team in history. The expectation and optimism is great and we are going to enjoy ourselves that day.”

Jorge Lorenzo and Marc Marquez will debut their full 2019 colours alongside the RC213V in Madrid of January 23.