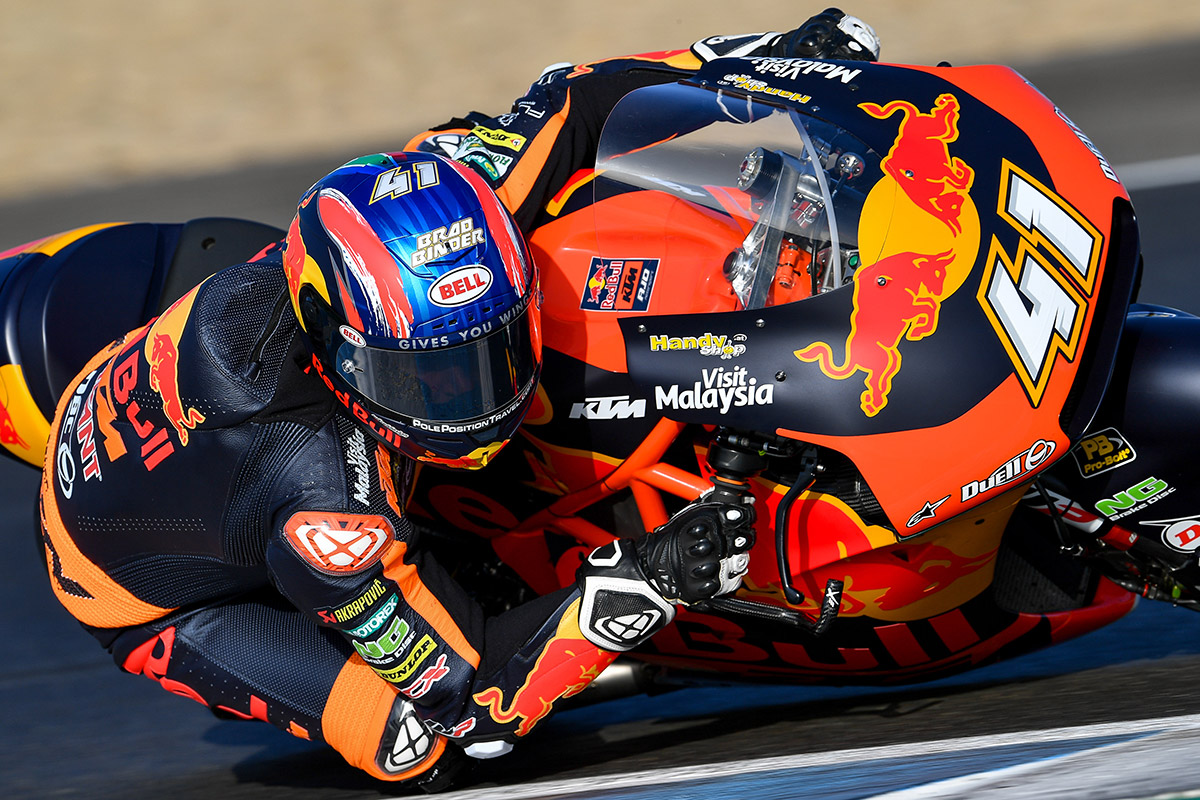 Brad Binder (Red Bull KTM Ajo) went fastest on the final day of the Official Moto2™ Test at the Circuito de Jerez-Angel Nieto, but it wasn’t by much as Sam Lowes (Federal Oil Gresini Moto2) kept the South African honest and the two ended the day just 0.007 apart. Binder and Lowes were also the fastest two over all three days and the only two to drop below the 1:41 mark, although the timesheets remained close behind them with the top twenty within less than a second.

The man in seventh made some headlines of his own just behind the veteran Spaniard, with Nicolo Bulega (Sky Racing Team VR46) the fastest rookie by a tenth at the end of Day 3. Jorge Martin (Red Bull KTM Ajo) was the debutant just that tiny fraction behind him, although the reigning Moto3™ Champion was ninth overall and the two rookies were split by Australian Remy Gardner (ONEXOX TKKR SAG Team). Marcel Schötter (Dynavolt Intact GP) completed the top ten.

Jorge Navarro (+Ego Speed Up) ended the day’s action in P14 as fastest Speed Up, just ahead of Bo Bendsneyder (NTS RW Racing GP), the fastest NTS. The quickest man on the new MV Agusta was Dominique Aergerter (MV Agusta Idealavoro Forward) once again, and the Swiss rider was in P20 but only nine tenths off.

In Moto3™, it was a day of two halves for Jaume Masia (Bester Capital Dubai) as the Spaniard set the fastest lap on the last day, but he also broke some toes and is faced with that extra challenge ahead of the season opener and next test. The incident wasn’t enough to give the field a chance to catch his laptime though, and the 1:45.241 put in by the number 5 remained an impressive seven tenths ahead of his closest competitor, the returning Romano Fenati (Snipers Team). Lorenzo Dalla Porta (Leopard Racing) completed the top three, making it KTM-Honda-Honda on Friday.

Fourth fastest was a familiar name from the higher echelons of the timesheets on Day 1 and Day 2: Tony Arbolino (Snipers Team). The Italian was just over a tenth off compatriot Dalla Porta and only 0.033 ahead of fellow Italian Andrea Migno (Bester Capital Dubai), with Day 2’s quickest man, Aron Canet (Sterilgarda Max Racing Team), completing the fastest six by an even smaller 0.004.

Then came the first rookie: Sergio Garcia (Estrella Galicia 0,0). The impressive Spaniard, who is only 15 and will be forced to miss the season opener due to being too young, was 11th overall to end the day outside the top ten for the first time this test – having even ended Day 2 in second. Veteran Niccolo Antonelli (SIC58 Squadra Corse) split the rookie from the next fastest full-time debutant, reigning FIM CEV Repsol Moto3™ Junior World Champion Raul Fernandez (Angel Nieto Team), although the Spaniard isn’t able to compete for Rookie of the Year by virtue of eight previous appearances. Gabriel Rodrigo (Kömmerling Gresini Moto3) was P14, ahead of rookie Ai Ogura (Honda Team Asia).

It’s shaping up to be another classic and close season of racing in both Moto2™ and Moto3™ and now it’s next stop Qatar as they head back out in a week to test at Losail International Circuit.