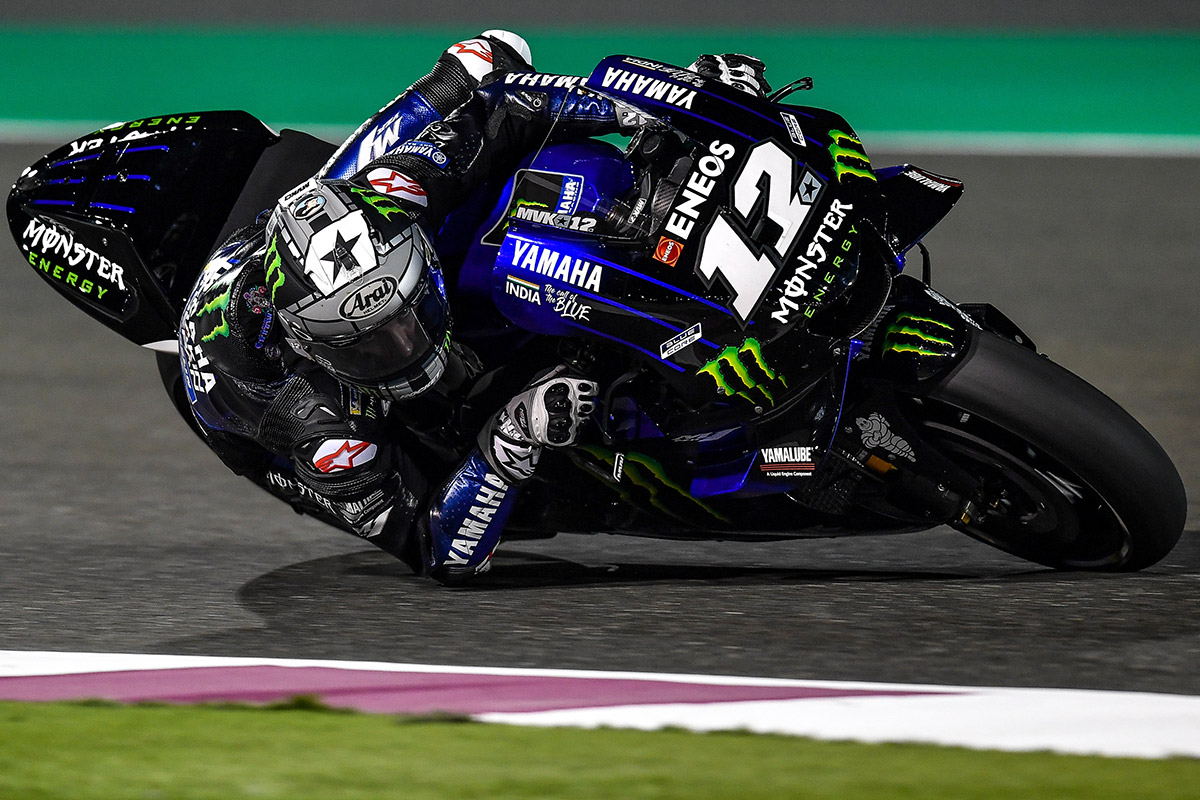 Maverick Viñales (Monster Energy MotoGP) topped the first day of the Qatar Test, putting in a 1:55.051 to head the grid after a late charge for supremacy. It was close though, with the Suzuki of Alex Rins (Team Suzuki Ecstar) just 0.108 back – and the two set those laps close together on track. As always when action returns to Qatar, track conditions need to improve throughout the day and it was therefore fairly late on that a lot of the action took place – and the latter part of the day when Viñales blasted to the top.

That 1:55.051 to put Monster Energy Yamaha MotoGP on top was one of 50 laps completed by Viñales on Day 1, and the signs look good for the factory – with teammate Valentino Rossi not far back as he completed the top five after 47 laps. Team Director Massimo Meregalli confirmed the engine had already been decided and that focus was first on comparing data with that from Sepang. Aero, however, remains up in the air – with more to try for the Iwata marque at Losail.

Petronas Yamaha SRT, meanwhile, had more positives – first for rookie Fabio Quartararo. Quickest debutant by a stretch on Saturday, the Frenchman was a stunning seventh overall and less than two tenths off Rossi after 49 laps. Franco Morbidelli was a little further down after the first session, ending the day seven tenths further back in P14.

Alex Rins put in a similar lap count: 48. The Spaniard showed more good form for Hamamatsu factory Suzuki after threatening the top on the first days of the Sepang test too, and this time rookie teammate Joan Mir began the test further up the timesheets as he ended the day in P11. Suzuki had a new exhaust on show and Team Manager Davide Brivio confirmed that the chassis is defined, the engine spec is decided and said that focus was now on fine tuning and the details – including some final aero checks and work on the suspension and settings.

So behind the duo at the top, who came next? Both Mission Winnow Ducatis, with Andrea Dovizioso leading teammate Danilo Petrucci by a mere 0.044 – although they were half a second back. Both put in less laps than some of their competitors, with Dovi doing 29 and Petrucci 37. The latter was only just ahead of Rossi, but 0.010 can make the difference in MotoGP™. Team Manager Davide Tardozzi says, like many up and down pitlane, focus is now on the details – but the Borgo Panigale factory plan to make their final aero decision on Sunday.

Tito Rabat (Reale Avintia Racing) kept the good news rolling for Ducati machinery as he ended the day in P6 after 44 laps, happy there’s more room to improve, too, but Alma Pramac Racing, who starred in the Sepang test, were a little further back on Day 1 in Qatar. Francesco Bagnaia was P15 after a 1:56.738, with teammate Jack Miller in P19. Miller said, however, he spent the session doing six to eight lap runs, testing different parts – and lacking the time to be able to put in a tyre to push for a hot lap.

Another surprise on Saturday came from the fastest Honda: Takaaki Nakagami (LCR Honda Idemitsu). The Japanese rider showed more top pace and put in 45 laps. Teammate Cal Crutchlow (LCR Honda Castrol) spent some time testing parts for HRC and finished the session in P18. Reigning Champion Marc Marquez (Repsol Honda Team), whose shoulder remains less than 100% after surgery, ended the day in tenth and, like in Sepang, put in only 34 laps. But he was positive and said he’s now back to riding in his more natural style, and he had his first crash of the season with no consequence. On the other side of the garage, the return of Jorge Lorenzo saw the ‘Spartan’ struggle in braking as he comes back from a broken scaphoid, and he focused on continuing to understand the bike. Despite not so many laps and not too many new things to try as yet, the five-time World Champion did mention his desire to modify the seat in an effort to make his new machine a little more ergonomic. Repsol Honda Team Manager Alberto Puig said work on engine and aero is continuing until the last moment for the team – because every possibility is something worth trying – and a new exhaust was one thing spotted.

Pol Espargaro (Red Bull KTM Factory Racing) impressed on Day 1. The Spaniard, who took the Austrian factory’s first premier class podium at Valencia last season, was the trailblazer once again as he finished up Saturday’s action in P9 after 47 laps. Teammate Johann Zarco put in 53 laps and was P16, around eight tenths back, and he was just 0.121 ahead of rookie KTM rider Miguel Oliveira on the Red Bull KTM Tech3. Red Bull KTM Factory Racing Team Manager Mike Leitner specified they’re working on confirming chassis and aerodynamic modifications, and said the goal was to first finish off the test program from Sepang and then find a base setting for the race – as you’d expect. He also added that the items on the agenda are now less, something that speaks of the scale of KTM’s development program given the amount of track time already gone in preseason.

Aprilia, meanwhile, slotted into P12 and P13 with Aleix Espargaro and Andrea Iannone respectively – despite crashes for both. Espargaro did 34 laps and confirmed the bike is a definite improvement on last year’s, and Iannone catapulted himself up the timesheets after struggling with illness and missing much of the Sepang test. The Italian managed 30 laps and was only 0.089 off Espargaro by the end of the day. One key thing the Noale factory were spotted trying was an aero fairing.