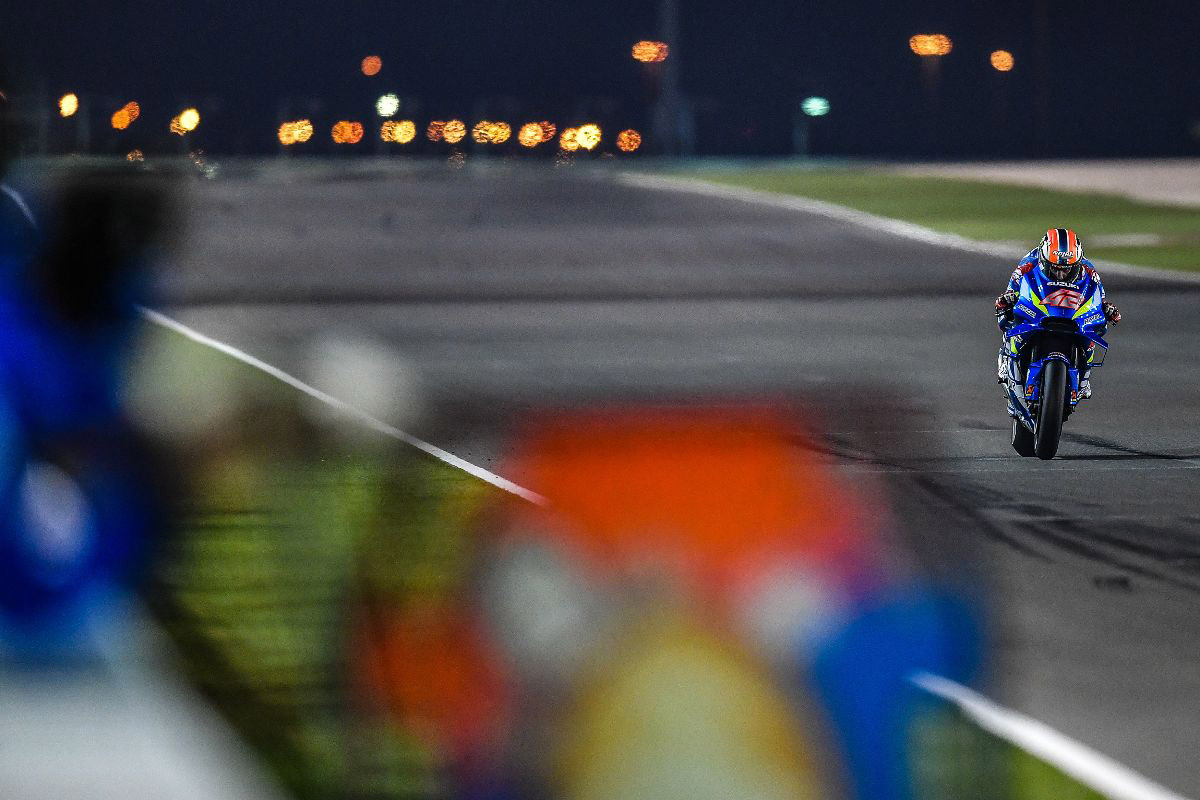 Alex Rins (Team Suzuki Ecstar) went one better on Sunday as the Spaniard put in a 1:54.593 to go fastest on Day 2, but it remained tight at the top as the tables turned and Maverick Viñales (Monster Energy Yamaha MotoGP) ended the day just 0.057 in arrears. That made some headlines in itself, but the man in third stole some too: rookie Fabio Quartararo (Petronas Yamaha SRT) stormed to third overall.

47 laps was the final number for Rins as the Suzuki man continued to look like a serious 2019 contender. His teammate, rookie Joan Mir, also impressed and put in a 1:55.280 to end Sunday in P11 and less than seven tenths off his teammate – as well as the second quickest rookie. Team Manager Davide Brivio said Mir was also testing some things, as well as adapting to the bike, but that he’d like to “race tomorrow” looking at Rins’ pace. That bodes well, and the Hamamatsu factory man also said everything “visible” on the bike is decided.

So what of Yamaha? Viñales did a slightly increased 52 laps on Day 2 and was almost top, but he did say they needed to make more progress and improve on the final day. It was a different story – in terms of laptime at least – for teammate Valentino Rossi. The ‘Doctor’ ended the day down in P19 and over a second off Viñales after 51 laps, but the number 46 has never been one to blast out the blocks in testing. Team Director Massimo Meregalli says it’s been time to confirm positives from Sepang, and that the speed and consistency from Day 1 were encouraging. On Sunday they focused on back-to-back comparisons, and working on fairings as homologation date draws near. The fairing, says Meregalli, is the only thing left to be decided upon – but there was also a new tail unit spotted.

Petronas Yamaha SRT, meanwhile, remained impressive in their own right and as help with development for the Iwata marque. Quartararo’s bike isn’t far off that of Monster Energy Yamaha MotoGP, and teammate Franco Morbidelli’s is the same as that of Viñales and Rossi. Quartararo stunned with his laptime in third, and Morbidelli ended the day in P13 after 52 laps of more important data gathering.

Another man echoing the sentiments of Suzuki boss Davide Brivio on Day 2 was Danilo Petrucci (Mission Winnow Ducati Team). The Italian said he’d be up to race ASAP too, and he was the fastest Borgo Panigale machine in P4. After 48 laps ‘Petrux’ did a best of 1:54.953 and, despite being down in P8, teammate Andrea Dovizioso was close with a 1:11.205 after 53 laps. Team Manager Davide Tardozzi said Ducati have “clear ideas regarding frame, engines, aerodynamics, electronics” and that they were concentrating on tyre life – with an interesting addition under the bike that rumour says is aimed at tyre temperature.

Jack Miller (Alma Pramac Racing) was the top Independent Team Ducati rider on Sunday and leapt up the timesheets into P12, with Tito Rabat (Reale Avintia Racing) in P14 despite a crash. He was just ahead of the second Alma Pramac Racing machine of rookie Francesco Bagnaia.

At Honda, Marc Marquez (Repsol Honda Team) was the fastest man for the marque, in fifth. A 1:55.004 was his best effort, but crucially the reigning Champion managed nearly 60 laps – a good sign in his ongoing recovery from shoulder surgery, with Marquez having done less than forty on most test days so far. Teammate Jorge Lorenzo was a second quicker than Day 1 but in a tight trio between Johann Zarco (Red Bull KTM Factory Racing) and Rossi, and he put in 44 laps with a best of 1:55.742 as he fights to recover from his broken scaphoid. He tried the latest fairing on Sunday, too, and said it was a much better day’s work. “The most important thing is to find the final specification for the engine,” adds Team Manager Alberto Puig, however…“this is what we’re trying to understand and fix.”

Takaaki Nakagami (LCR Honda Idemitsu) was second fastest Honda in P7, and rumour has it one of his bikes seemed to migrate to his teammate’s side of the garage too. That teammate, Cal Crutchlow (LCR Honda Castrol), had a tough first day but was back in the mix in the top ten on Sunday, doing 35 laps and taking P9.

Aleix Espargaro (Aprilia Racing Team Gresini) impressed once again on Day 2. He ended the day in sixth – just 0.002 ahead of Nakagami – and put in 55 laps. Aprilia had a new exhaust, and Technical Manager Romano Albesiano said Espargaro and teammate Andrea Iannone were testing race setup and aero. Iannone reportedly had positive feedback on the aero, and he ended the day in P16. Test rider Bradley Smith, meanwhile, was focusing on electronics.

Completing the top ten on Sunday was another headline stealer: Pol Espargaro (Red Bull KTM Factory Racing). He was even higher up for much of the session, and his 1:55.255 meant that all six factories were within the top ten after a fitting 44 laps for the 2013 Moto2™ World Champion. Teammate Zarco was in P17 just ahead of Lorenzo, but quicker than Day 1. Team Manager Mike Leitner said the focus had switched from bigger changes to details, and noted the pressure to get ready – especially with so many items to test. He also said both have good feelings and noted the particularly positive results for Espargaro’s testing.