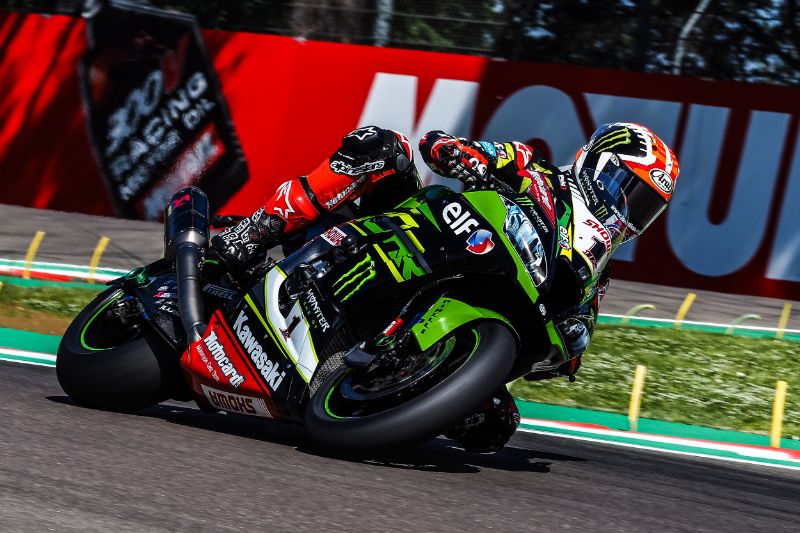 Day one at the Imola circuit concluded for WorldSBK, as quick times were coming thick and fast. With the sun beating down, action unfolded and yet again, it was Jonathan Rea (Kawasaki Racing Team WorldSBK) who remained in the number one position, ahead of Chaz Davies (ARUBA.IT Racing – Ducati) and the BMW of Tom Sykes, making it three manufacturers inside the top three positions.

Four-time WorldSBK champion Jonathan Rea continued his positive start to the Pirelli Italian Round, running at the front again in FP2. Despite not improving in his lap time from the morning until late on in the session, eventually nobody was able to challenge Rea at the front. Rea looked in fine form, stringing a run of fast laps together to continue Kawasaki’s good form in Ducati’s backyard. His teammate, Leon Haslam, likewise did not improve his time in the second session until late on in the session but dropped overall, concluding the opening day in seventh position.

Ducati continued their strong start to the Pirelli Italian Round, as Chaz Davies (ARUBA.IT Racing – Ducati) marched his way into top position, at a circuit at which he has achieved four WorldSBK race wins at in his career. The Welshman blitzed into the lead with just a few minutes left in the session. Alvaro Bautista continued to adapt to the tricky Imola circuit and was seemingly struggling, making various little mistakes that he has not displayed all season. The Spaniard completed the day in fourth, with 0.712s between him and Rea.

Tom Sykes (BMW Motorrad WorldSBK Team) had a relatively quiet session in comparison to those around him, making plenty of progress through the session. The 2013 WorldSBK champion is a double winner at the Imola circuit and looks primed for another strong showing, this time for the German manufacturer. Completing the session in third place, Sykes will be hoping to continue improving on Saturday. His teammate, Markus Reiterberger, struggled again and was only 13th.

If Toprak Razgatlioglu (Turkish Puccetti Racing) was rattled by not completing FP1 as top Independent, then he certainly made up for it in FP2 by rounding out the top five. The Turkish rider was pursuing Alvaro Bautista in the closing stages and made big gains, to end the opening day at Imola in a strong fifth place. Other Independent riders to feature inside the top ten after Friday included wildcard Lorenzo Zanetti (Motocorsa Racing), who was ninth and one place ahead of fellow countryman, Michael Ruben Rinaldi (BARNI Racing Team) in tenth. Zanetti ended the day as top Italian.

Sixth position went to Michael van der Mark (Pata Yamaha WorldSBK Team), who maintained his FP1 position whilst vastly improving his time. The Dutchman’s continuity through the opening day at the Pirelli Italian Round bodes well for the remainder of the weekend. His teammate, Alex Lowes, also improved his time but was only eighth at the end of the day. The rider, who sits third in the championship behind Bautista and Rea, will have work to do overnight if he is to keep tabs on those ahead of him in the title race.

Notable names outside the top ten included Jordi Torres (Team Pedercini Racing) who was 11th at the end of the day, with Marco Melandri (GRT Yamaha WorldSBK) in 12th whilst his teammate, Sandro Cortese, was 14th and suffered a crash. The Moriwaki Althea Honda Team concluded day one at Imola with Leon Camier and Ryuichi Kiyonari in 15th and 16th respectively.

The 2019 FIM Supersport World Championship roared back into life at the Autodromo Internazionale Enzo e Dino Ferrari circuit in Imola. The Italian saw home-hero Federico Caricasulo (BARDAHL Evan Bros. WorldSSP Team) who ended day one on top. In FP2, two red flags were shown; the first due to a crash between Randy Krummenacher (BARDAHL Evan Bros. WorldSSP Team) and Corentin Perolari (GMT94 YAMAHA) at Acque Minerale and a second from Thomas Gradinger (Kallio Racing) at the Variante Alta.

Federico Caricasulo will be hoping that topping day one at the Pirelli Italian Round was no fluke, as the Italian rider goes in a quest to win a second consecutive WorldSSP race. The Italian wasn’t able to improve on his time in FP2 and suffered a crash on the exit of Variante Alta in the final ten minutes. Jules Cluzel (GMT94 YAMAHA) was looking back to his old self and placed second overall but was on top in FP2, whilst Randy Krummenacher was third despite his crash and consequential problems.

In fourth overall, Ayrton Badovini (Team Pedercini Racing) continued his good form at home and was top Kawasaki rider whilst being the first non-Yamaha rider too. Lucas Mahias (Kawasaki Puccetti Racing) was in fifth place but suffered a crash in the closing stages. Sixth position belonged to Thomas Gradinger, who suffered a similar crash to Caricasulo at Turn 15. The Austrian rider, however, is in the mix for another podium challenge.

Up next, a brace of Italians; Massimo Roccoli (Team Rossa Corsa) was seventh on his wildcard appearance and ahead of regular rider, Raffaele De Rosa (MV AGUSTA Reparto Corse), who concluded the opening day in eighth overall, being pushed back at the end of FP2.

Japanese star Hikari Okubo (Kawasaki Puccetti Racing) was once again a frontrunner and placed well within the top ten overall, in ninth, but complete FP2 in seventh. In combined times, the top ten was rounded out by Federico Fuligni (MV AGUSTA Reparto Corse) as he made a welcome reappearance in the top ten.

WorldSSP300 was back on track at Imola for their 2019 campaign, returning after a four-week hiatus. From back-to-back rounds at a busy Aragon and a weather-affected Assen, the WorldSSP300 category now takes to the historic Imola circuit in Italy. After the first day of action, it was 2017 WorldSSP champion Marc Garcia (DS Junior Team) on top, but there’s plenty of time left for the others to catch up.

Having dipped below the existing lap record in FP2, Group A were once again dominant in the leading positions on combined times. Marc Garcia’s time of 2’07.028 placed him ahead of Mika Perez (Scuderia Maranga Racing) and Hugo De Cancellis (Team Trasimeno Yamaha). Garcia won at the Imola track back in 2017 and will be hoping that he can use this weekend as a platform to elevate himself up from a lowly 14th in the championship.

Fourth on the time sheets was Galang Hendra Pratama (Semakin Di Depan Biblion Motoxracing), who led for the majority of the session. The Indonesian rider was 0.442s from the top time by Garcia. In fifth place was the first of the Group B entrants, with Bruno Ieraci (Kawasaki GP Project) continuing his impressive form on from Assen. Kevin Sabatucci (Team Trasimeno Yamaha) made it a 1-2 in Group B for Italy and finished sixth overall, making for an exciting prospect for the rest of the weekend.