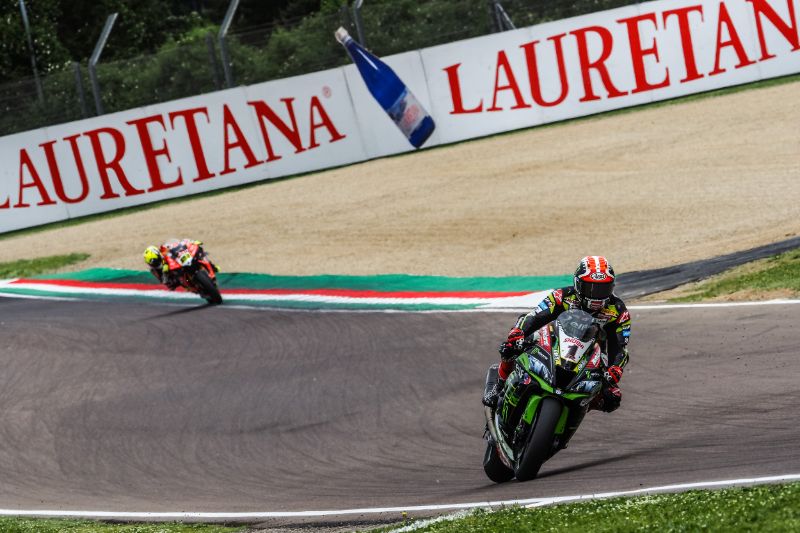 It was a welcome return to the top step of the podium for Jonathan Rea (Kawasaki Racing Team WorldSBK), who put in an exhibition during Race 1 of the Pirelli Italian Round. Off the line, it was a bright start for Rea, but he couldn’t get the better of Chaz Davies (ARUBA.IT Racing – Ducati) down into Tamburello. However, on the run to Acque Minerale, Davies suffered a problem and was forced to retire, handing Rea the lead whilst Davies’ teammate Bautista had second.

As the race settled down, Rea built a comfortable lead and was extending his advantage over Bautista by around 0.7s per lap. Bautista in turn was escaping the attention of Sykes but the main battle through the race was for fourth, with van der Mark leading Lowes, whilst Razgatlioglu was now in sixth, ahead of Haslam.

Michael Ruben Rinaldi (BARNI Racing Team) was a rider making great progress too, all the way up into the top ten by the mid-point of the race from 17th on the grid. The Italian was putting in a fantastic performance for his and Ducati’s home fans. Fellow Italian and Independent rider Marco Melandri (GRT Yamaha WorldSBK) was also on the charge through the field.

British rider Alex Lowes began to slip back, having been ill all weekend. Soon, a tradition ‘Marco Melandri block-pass’ at the final corner by the Italian pushed Lowes back into eighth. However, he would soon be promoted as a disaster for Tom Sykes occurred, with the BMW S 1000 RR suffering more mechanical gremlins, robbing the 2013 WorldSBK champ of a certain podium.

Sykes’ demise promoted a huge battle between van der Mark and Razgatlioglu for the final podium position. The Turkish star made his move in the closing stages and got ahead of van der Mark. Then, a grandstand finish between the two, swapping paint and trading blows on the penultimate lap, colliding twice and bringing Leon Haslam back into the mix. Imola was once more providing thrilling action.

Meanwhile, in a league of his own, Jonathan Rea blitzed the opposition in a vintage fashion, taking his first win of the season to end the run of victories by Alvaro Bautista. The Spaniard maintains a healthy championship lead with a second-place finish and then, in the battle for third, Toprak held on for his third WorldSBK podium! Michael van der Mark and Leon Haslam completed the top five!

Inside the top six from a poor Tissot Superpole, Marco Melandri was ahead of Alex Lowes, with Michael Ruben Rinaldi eighth after his antics earlier on in the day. Lorenzo Zanetti (Motocorsa Racing) was an impressive ninth as his wildcard weekend unfolded. Completing the top ten, the sole-surviving BMW of Markus Reiterberger (BMW Motorrad WorldSBK Team).

It is Jonathan Rea’s eighth win at Imola and his 72nd career victory in WorldSBK, ending his longest winless run since 2013. It is the 128th win for Kawasaki in WorldSBK too.

The FIM Supersport World Championship was back in action at Imola and in a fierce Tissot Superpole session, it was Randy Krummenacher (BARDAHL Evan Bros. WorldSSP Team) who clinched pole position at home. The Swiss, who has looked one of the fastest riders all weekend, took his third pole position and became the first Swiss to take back-to-back poles in WorldSSP.

In what has been a circuit that has seen much drama for Krummenacher so far in the Pirelli Italian Round, the championship leader made it count when it counted. Storming to a new lap record and pole position in the final moments of the Tissot Superpole, Krummenacher will lead the field down to the Tamburello Chicane for the first time on Sunday. Teammate Federico Caricasulo completed the session in second place to make it a BARDAHL Evan Bros. WorldSSP Team one-two, whilst Jules Cluzel (GMT94 YAMAHA) completed row one, despite crashing at the final corner in the last moments of the session.

Row two features Thomas Gradinger (Kallio Racing) in fourth position, a solid starting place after his crash on Friday. Behind him is Japanese sensation Hikari Okubo (Kawasaki Puccetti Racing), who was the first non-Yamaha ride and once again, impressing aboard the Kawasaki ZX-6R. Row two is completed by Raffaele De Rosa (MV AGUSTA Reparto Corse), who achieved his best WorldSSP qualifying at Imola.

In the usual frantic and chaotic manner, WorldSSP300 took to the famed Imola layout for their Tissot Superpole sessions. On pole position, it was Group A rider Mika Perez (Scuderia Maranga Racing), who slotted in a tidy time to take his fifth career pole, the most of anyone in the WorldSSP300 class.

With Spaniard Mika Perez came pace and intelligence, giving himself valuable track time, not only in the racing pack but also on his own, gaining experience and knowledge in both scenarios. However, the 2018 WorldSSP300 runner-up suffered a crash at Turn 6 but was up and OK. Joining him on the front row is French rider Hugo De Cancellis (Team Trasimeno Yamaha) and reigning WorldSSP300 champion and 2018 Imola winner, Ana Carrasco (Kawasaki Provec WorldSSP300).