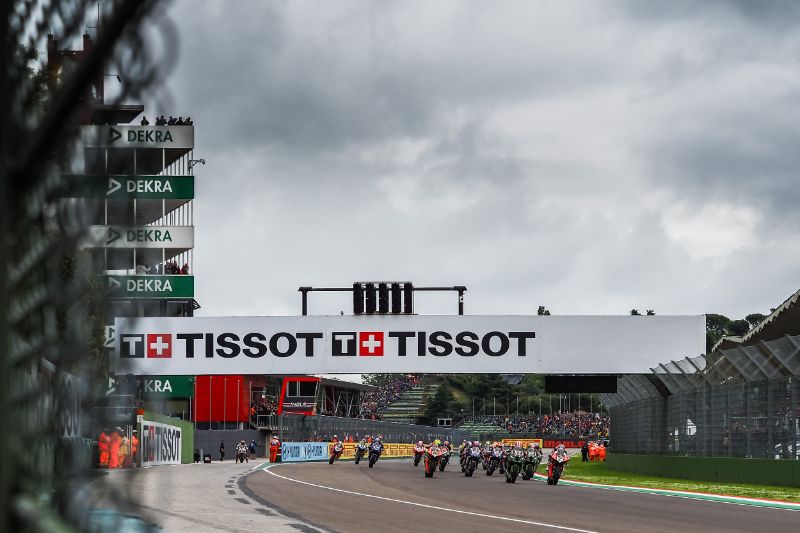 The first race of the third day of action at Imola was the Tissot Superpole Race, which provided fireworks once more. On a damp but drying circuit, there was drama before the race even started, as Tom Sykes (BMW Motorrad WorldSBK Team) missed the warm up lap and was forced to start from pit lane. The 2013 WorldSBK champion had work to do in the early stages.

With the race settling down, a mistake from Chaz Davies at the final chicane allowed Rea and Bautista to get ahead of him. Davies now had to put in the hard work all over again, as the reigning champion began to pull out an advantage.

Like in Race 1, a big battle unfolded for fourth place, this time with Michael van der Mark (Pata Yamaha WorldSBK Team) leading the battle from Toprak Razgatlioglu (Turkish Puccetti Racing), Alex Lowes and Haslam, who had once again dropped down the order after a combative couple of laps from the Pata Yamaha WorldSBK Team riders.

Toprak Razgatlioglu however wouldn’t stay in the fight long, as he began to drop back through the field, with his Superpole Race tyre not able to go the distance. Similarly, Alvaro Bautista, who had also opted for the same compound, began to drop back towards his teammate and with just five laps to go at the second part of Rivazza, Davies squeezed down the inside.

Then, the two dominant forces of WorldSBK in the past four seasons – Rea and Davies – went head-to-head in terms of lap times, right on lap record pace and both having to keep the pace up right until the end. The gap momentarily came down to below a second, but Davies was unable to get on terms with Jonathan Rea, whilst Bautista rode answerless in third position.

Down the field, there were some phenomenal rides, with Tom Sykes rocketing up the order and making short work of those in his sights. Soon, he was ahead of Jordi Torres (team Pedercini Racing) with just one lap to go and his attention turned to toppling Toprak, who was now losing time hand over fist. Another stunning ride was completed by Tommy Bridewell (Team Goeleven), who blitzed through the order on the opening lap to get to 11th place from his row six starting place.

However, at the front, Jonathan Rea took the win, his second of the season and his first in the Tissot Superpole Race. Davies and Bautista came home behind him, whilst Michael van der Mark took his best Imola result. Lowes was back inside the top five, with Leon Haslam placed in sixth. Razgatlioglu was caught but not passed by Sykes, as they finished seventh and eighth respectively, whilst Jordi Torres was ninth. Markus Reiterberger (BMW Motorrad WorldSBK Team) completed the top ten.

It was an action-packed WorldSSP race at Imola, which had drama, intrigue and battles scattered right the way through the 17-lap encounter. In a race that saw a group of five whittled down to the leading duo in the championship of Randy Krummenacher (BARDAHL Evan Bros. WorldSSP Team) and teammate Federico Caricasulo, it was an exciting race that went down to a vintage WorldSSP final lap.

On the opening lap, it was a brilliant start from Jules Cluzel (GMT94 YAMAHA), who came from third on the grid to the lead, holding off pole-sitter Randy Krummenacher and Federico Caricasulo. A blistering start from Lucas Mahias (Kawasaki Puccetti Racing) was halted as Massimo Roccoli (Team Rosso Corsa) surged through from ninth on the grid to be fourth.

At the start of lap two, trying to make up ground, Mahias tried to get ahead of Raffaele De Rosa (MV AGUSTA Reparto Corse) on the front straight, cutting to the inside and pushing the Italian rider wide at Tamburello. Then, a raft of fastest laps came in from the leading five, with Caricasulo, Mahias and Thomas Gradinger (Kallio Racing) setting fastest laps in consecutive laps.

Mahias and Gradinger were starting to close the gap to the leading trio, as they got to work by taking advantage of the leaders’ hesitance in the tricky weather conditions. However, a mistake from Jules Cluzel on the exit of the Variante Alta meant that both Krummenacher and Caricasulo were able to get ahead. A few laps later, and Cluzel was once again wide at the same corner, now bringing the likes of Mahias and Gradinger into the fight.

However, drama was just around the corner, as a problem for Cluzel on the exit of Turn 22 saw Mahias collide with his fellow countryman, leaving Gradinger nowhere to go. With more than half race distance complete, Mahias remounted but now had work to do to try and make the most of a bad situation. This however was not bad news for the home fans, who saw Raffaele De Rosa hit the podium places.

As the leading duo were now alone, a thrilling last lap was in prospect, with Krummenacher right on the rear of Caricasulo. A slight mistake at Turn 7 from Caricasulo allowed his teammate to close in but it was a bigger mistake at the Variante Alta that allowed Krummenacher to get ahead on the run to Rivazza. A mistake from the Swiss rider at the last chicane almost cost him the win but he held on ahead of Caricasulo to take the win, ahead of De Rosa.

Unfortunately, a red flag was shown in the closing moments, with Massimo Roccoli suffering an enormous high-side crash at the first Rivazza. He was stretchered away and despite running as high as fourth in the race, left Imola empty handed.