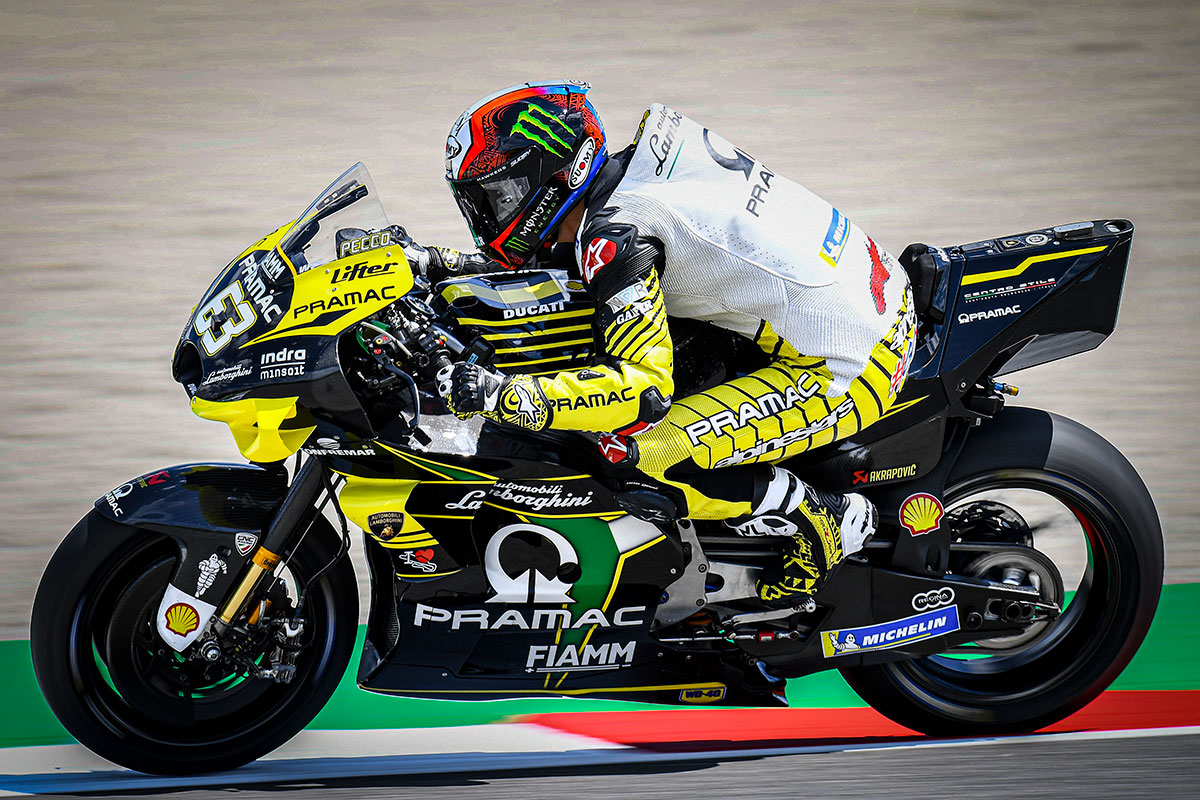 Francesco Bagnaia (Pramac Racing) and Fabio Quartararo (Petronas Yamaha SRT) stole the headlines on Friday in the Gran Premio d’Italia Oakley, with the rookies taking a 1-2 and split by just 0.046 at the top – making it the first time since Qatar 2008 qualifying, when Jorge Lorenzo took his debut pole ahead of Brit James Toseland, that two rookies have topped a full session. Their closest competition came from Danilo Petrucci (Mission Winnow Ducati) as the Italian was just under a tenth in arrears in P3, with some big names outside the top ten: Andrea Dovizioso (Mission Winnow Ducati), Valentino Rossi (Monster Energy Yamaha MotoGP) and Jorge Lorenzo (Repsol Honda Team).

Conditions were a stark contrast to Le Mans as the sun shone over the stunning Tuscan countryside in Mugello, and as the clock ticked down, every rider apart from LCR Honda Idemitsu’s Takaaki Nakagami and Aleix Espargaro (Aprilia Racing Team Gresini) had improved on their FP1 times with just under 20 minutes to go. As is oft the case in MotoGP™ FP2, however, most of the chopping and changing came in the final ten minutes.

FP1 leader Marc Marquez (Repsol Honda Team) was sat at the top of the times for most of FP2, followed by a quintet of Ducatis, before Monster Energy Yamaha MotoGP’s Maverick Viñales then jumped into the top four and fellow Yamaha rider Quartararo moved up into P3 as the timing screens lit up with red sectors. Danilo Petrucci (Mission Winnow Ducati) was the next to strike as he took over at the top, before Red Bull KTM Factory Racing’s Pol Espargaro stuck in the first 1:46 of the weekend to take P1 and impress once again.

Petrucci and Quartararo then exchanged fastest times at the top, but with seconds to go there was another Italian on the march: Bagnaia, who improved drastically from a P17 in FP1 to delight the home crowd. That pushed Quartararo down to second, but only by half a tenth, with Petrucci in P3 and Pol Espargaro keeping hold of his top four.

Viñales didn’t lose too much ground to end the day in fifth after a more difficult FP1 down the timesheets, with Marquez down in P6 as he looks to take his third win in a row. Key rival Alex Rins (Team Suzuki Ecstar), pushing to recover from a tougher French GP, was seventh quickest on Friday, ahead of LCR Honda Castrol’s Cal Crutchlow in eighth. Jack Miller (Pramac Racing) took P9 after a late crash for the Australian that dropped him out the running, with italian Franco Morbidelli (Petronas Yamaha SRT) completing the top ten and list of provisional automatic graduates to Q2.

So who’s missing? Dovizioso is in P11 so not far off, with Johann Zarco (Red Bull KTM Factory Racing) just behind him despite a big off for the Frenchman – rider ok. But Rossi is P18 and Lorenzo P20 after Day 1, and two have a combined total of 13 premier class wins at Mugello. FP3 will be pivotal for both, but there’s no need to panic just yet: with good weather forecast it should provide a thrilling time-attack from the whole grid and they’re sure to play a part on Saturday morning.

Sky Racing Team VR46’s Luca Marini concluded the opening day of the Gran Premio d’Italia Oakley as the man to beat in Moto2™, leading FP1 and following it up by going fastest in FP2. It was close, however, with Tom Lüthi (Dynavolt Intact GP) just 0.008 seconds off by the end of play. 2017 winner Mattia Pasini (Petronas Sprinta Racing), replacing the injured Khairul Idham Pawi, made it two Italians inside the top three as he ended Friday in third.

Lüthi’s teammate Marcel Schrötter was back at the sharp end under the sunny Tuscan skies on Day 1 too, with both Dynavolt Intact GP riders finding a big improvement from FP1. Nicolo Bulega (Sky Racing Team VR46) rounded out the top five and was top rookie on home turf, making it a top first day for the team as neither Marini nor Bulega have finished inside the top five so far this season so far.

MB Conveyors Speed Up’s Jorge Navarro was P6 and just over half a second adrift of Marini, and he was the first non-Kalex rider once again, although closely followed by the Red Bull KTM Ajo of rookie Jorge Martin after a solid opening day from the Spaniard.

Alex Marquez (EG 0,0 Marc VDS), meanwhile, was the only man in the field not to improve on his FP1 time and as a result slipped to eighth overall. The French GP winner crashed out at Turn 1 halfway through the session and was unhurt but as a result ended the session two tenths off of his best lap from the morning.

Italtrans Racing Team’s Enea Bastianini was ninth quickest ahead of fellow Italian rookie Fabio Di Giannantonio (MB Conveyors Speed Up) after a top day for the debutants – four of them were in the top ten – with veteran Simone Corsi (Tasca Racing Scuderia Moto2) in 11th as he looks to repeat his Le Mans pace on homesoil.

Ahead of FP3 on Saturday, the provisional remaining places in Q2 are heading to Remy Gardner (ONEXOX TKKR SAG Team), Brad Binder (Red Bull KTM Ajo) and Sam Lowes (Federal Oil Gresini Moto2), with Championship leader Lorenzo Baldassarri in 18th after Day 1. He is, however, only 0.902 behind Marini and made a pretty good comeback after a tougher Friday in Jerez…

Red Bull KTM Tech 3’s Marco Bezzecchi, meanwhile, was the source of some drama as he crashed out at Turn 5 but, despite a trip to the medical centre, he was thankfully declared fit for his home round and will be back out on track for FP3 from 10:55 (GMT +2) on Saturday. Then, it’s on to qualifying from 15:05.

SIC58 Squadra Corse’s Tatsuki Suzuki took top Moto3™ honours on Day 1 at the Gran Premio d’Italia Oakley, putting in a 1:57.467 in FP2 to fend off a superstar Friday from Italian wildcard Kevin Zannoni (RGR TM Official Team). Second Italian Tony Arbolino (VNE Snipers) completes the top three at Mugello – all within an incredible half a tenth – with Niccolo Antonelli (SIC58 Squadra Corse) on the chase in P4, just 0.073 off the top and after topping FP1.

Beautiful sunny skies met the grid on Friday and the timesheets in Moto3™ made for a spectacle in themselves: Suzuki’s fastest lap was 1.6 seconds quicker than he went in the morning, Zannoni two seconds faster and Arbolino over a second – with many of the big improvers leaving it late. The likes of Antonelli also shaved a good chunk off their laptimes in the afternoon but he was a consistent presence in the top echelons, as was John McPhee (Petronas Sprinta Racing) as he ended the day fifth overall.

Another close trio followed from P6 to P8, with Gabriel Rodrigo (Kömmerling Gresini Moto3), Ayumu Sasaki (Petronas Sprinta Racing) and Marcos Ramirez (Leopard Racing) locked within just over half a tenth. Rodrigo was also second in FP1, but Sasaki and Ramirez both made huge improvements in both laptime and position by the end of play in FP2.

Italian veteran Romano Fenati (VNE Snipers), who won the race in 2014, was ninth fastest and just over three tenths off Suzuki, with Darryn Binder (CIP – Green Power) completing the top ten in a solid opening day for the South African.