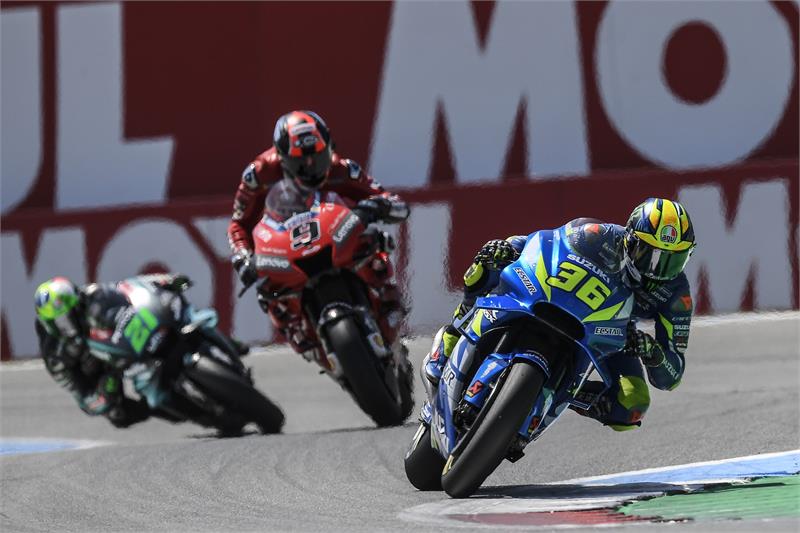 The eighth round of the 2019 MotoGP World Championship got underway in front of a bumper crowd of 105,000 people. Following a decent warm-up session, Team SUZUKI ECSTAR’s riders were feeling ready for the 26-lap race.

Alex Rins and Joan Mir, starting from their respective grid positions of 3rd and 5th, got off to rocket starts, leading the pack for the early laps. The pair looked comfortable and confident heading the field, but disaster struck at Turn 9 when Alex Rins lost the front of his GSX-RR and crashed out of the race. He was uninjured but very disappointed as he felt sure of bringing home a podium in Assen.

Joan Mir was able to hold position after the loss of his team-mate, with the rookie slotting into 5th place and maintaining strong pace for a large portion of the race. He focused on closing down the Ducati pair in front of him as his hard front tyre choice came into play. Joan was able to hold an impressive 4th place for several laps. A small mistake under braking with 2 laps remaining dropped him to 8th, a position he held until the chequered flag.

Joan Mir:
“I’m so happy about the weekend in general. Although it was still a bit of a shame, because I expected a little bit more. I was fighting really hard throughout the race, but I didn’t have much grip on the rear towards the end and I thought it was better to finish than fight. I’m looking forward to Sachsenring because I have been feeling much better recently, and I feel that I’m close to achieving some really strong results.”

Alex Rins:
“I did a really good start, and I was riding with a lot of confidence. But then, on the exit of Turn 8, the front came up a little bit more than usual and then I braked really hard getting into Turn 9 and I lost the front immediately. It was a real shame because I was doing well, with a good rhythm and good pace. I’m sure I would have stayed with the front riders. The good news is that I’ll be back on the bike in less than a week, at Sachsenring, and I’m really excited.”