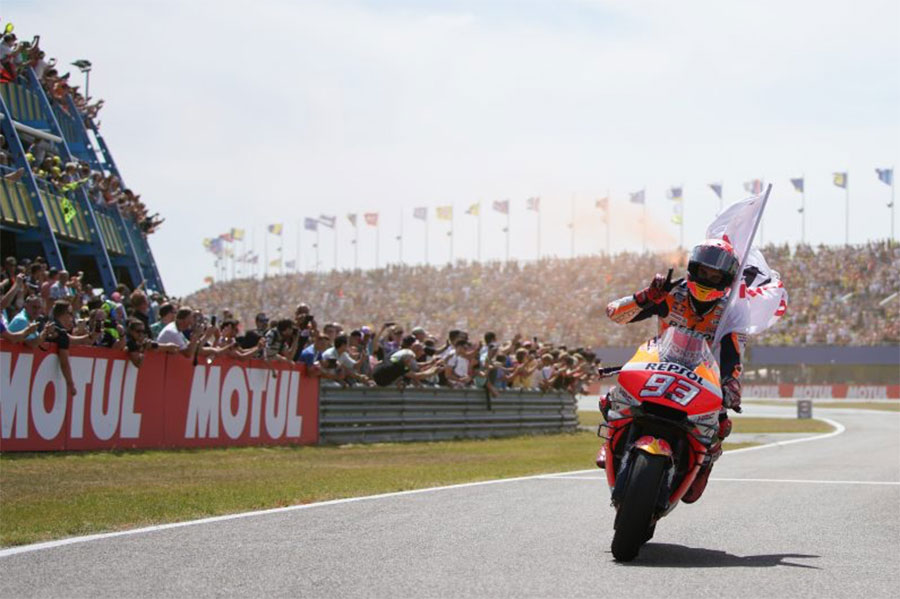 Second place after a spirited battle at The Cathedral sees Marquez walk away with an even greater championship lead.

Somewhat cooler than predicted temperatures at the TT Circuit Assen, 44°C track temperature, added an extra challenge to the 26-lap Dutch GP. Losing a place off the line, Marc Marquez quickly worked to make up his lost position. A dramatic third lap soon had the reigning MotoGP World Champion back in podium contention.

On lap 11 Marquez pounced into the led again down the back straight but Viñales and Quartararo soon responded, a thrilling three-way breaking out. With his lead in the MotoGP World Championship on his mind, Marquez eased his pace towards the end of the race and settled into a solid second.

Before the start of the race, Kunimitsu Takahashi and Mick Doohan delighted the Dutch crowd as the sound of two-stroke machinery returned to Assen with a demonstration lap aboard the 1959 RC142 and the 1989 NSR500 to celebrate Honda Racing’s 60th Anniversary.

There’s not long to wait for the German GP which runs from July 05 – July 07. The Repsol Honda Team heads directly for Germany as Jorge Lorenzo continues his recovery after falling in FP1.

Marc Marquez
“An amazing weekend here in Assen overall. I chose the soft tyre and targeted the podium so this is like a victory as we have again increased the advantage in the championship. I saw Viñales was faster than me and I tried to stay with him to avoid a battle with Quartararo at the end. I was behind Viñales for a few laps and then I saw he was faster than me today, congratulations to him on the victory. The most important part is we have extended our lead in the championship at a circuit where we struggle. Thank you Assen, see you next year!”