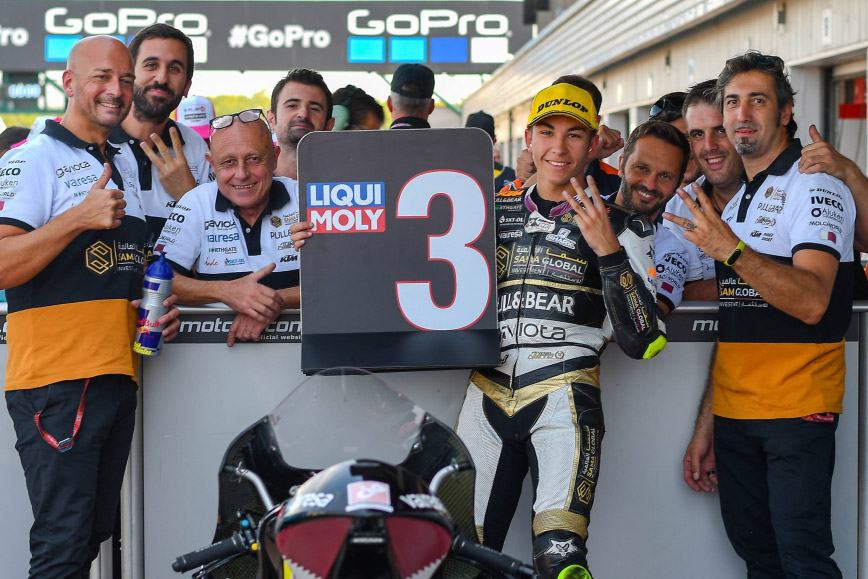 Sama Qatar Ángel Nieto Team Raúl Fernández claimed his second front row start of the season -his first since the GP of The Americas- in Saturday’s qualifying run at Silverstone. The Spanish rider earned third place for the British Grand Prix, despite having to go through Q1 and suffering pain in his left leg due to a crash on Friday. The 17-lap,100.3km Moto3 race will start at 11:20am local time. Starting alongside Fernández on the front row will be Tony Arbolino and World Championship leader Lorenzo dalla Porta.

Starting from the sixth row will be Albert Arenas. He was unable to lower his lap time on his second run in Q2, and had to settle for 16th on the grid. However, he is feeling good onboard his KTM bike and is looking to fight back for a result similar to that of the Austrian GP a fortnight ago.

3rd Raúl Fernández 2:12.112:
“I’m very happy with this result; starting from the front row is incredible. I was already satisfied to have got into Q2, because I had a lot of pain in my leg in Q1 -and even before that. I don’t know how the race will go tomorrow, nor how my leg will hold up, but I’m sure that there will be a large group of riders.”

16th Albert Arenas 2:13.402:
“Our strategy wasn’t completely right and I wasn’t able to put in a perfect lap, but I’m confident for tomorrow because the bike is working very well. I wanted to take advantage of a slipstream on the straight to lower my time a little, but I think Arbolino tried to slow down the group and that didn’t make it possible for me. I feel good on the bike, and that’s what we’ll take into tomorrow when the points are handed out.”