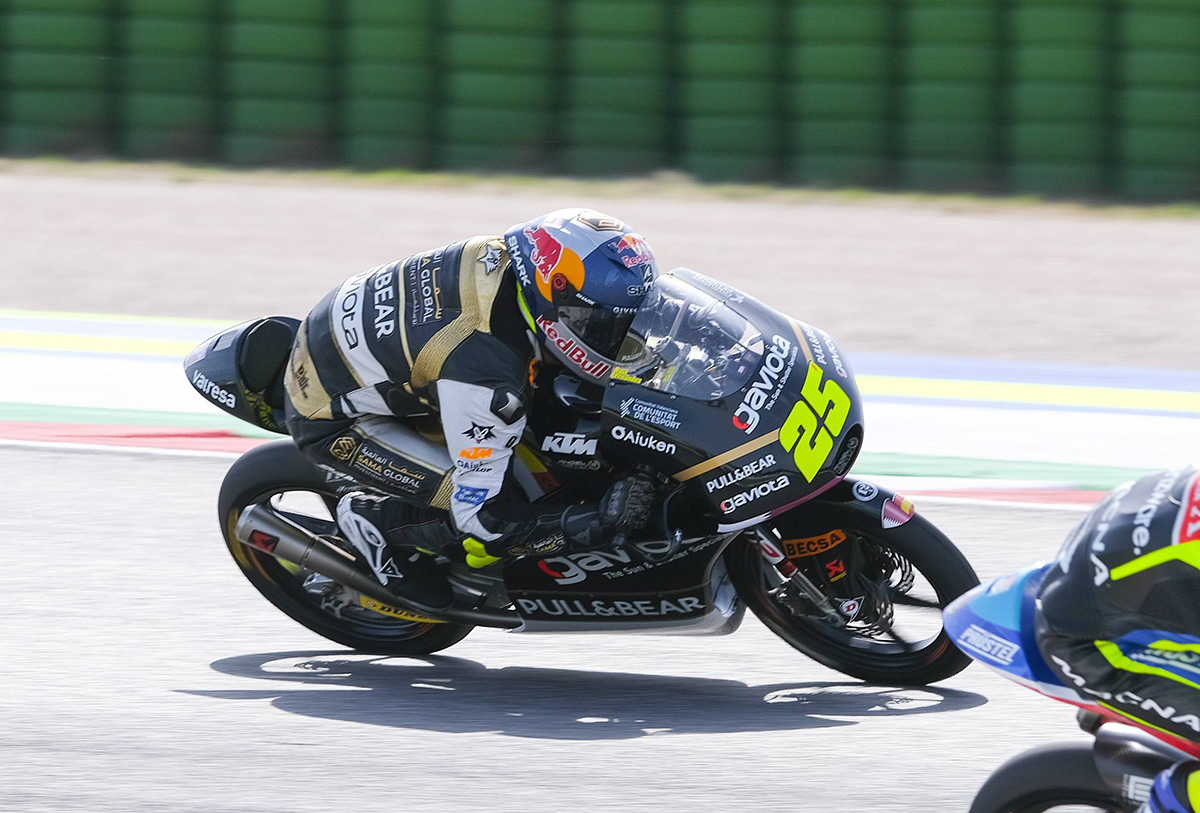 Tatsuki Suzuki took victory at the Misano World Circuit Marco Simoncelli in the San Marino GP, coming out on top in an intense race that saw several riders challenging for the win. John McPhee and Tony Arbolino joined him on the podium, as they emerged from a group that saw Ai Ogura and Andrea Migno crash and Jaume Masiá and Lorenzo dalla Porta impede one another with a battle for positions.

Dalla Porta was also given a 3-second penalty for repeatedly exceeding the track limits. However, the Italian continues to lead the Moto3 World Championship and increases his advantage to 22 points over nearest rival Aron Canet -unable to finish at Misano. Arbolino championship and increases his lead to 22 points compared to Aron Canet, who has not been able to finish the race.

The Gaviota Ángel Nieto Team and Raúl Fernández fought back 14 positions from 24th on the grid, reaching the Top 10 of a tough race. The Spaniard had been cut adrift of the lead group, but held out in a battle of endurance: Over a dozen riders would crash out. One of those to crash was teammate Albert Arenas. He was inside the Top 5 when he was thrown from his bike at Turn 2, bringing a great weekend to a premature conclusion. He had been the top rider in a session on Friday, gone straight through to Q2 on Saturday, placed eighth on the grid and come second in the warmup on Sunday. Next up for the Moto3 series is the Aragon GP, in a week’s time.

10th Raúl Fernández:
“We’d seen all weekend that there is not much grip at this circuit. It has been a hard weekend and we made several overhauls to the setup, never finding the right one. I feel bad about it, because in the opening races of the year I crossed the line just a short distance from the winner, and now I’m 10 seconds off. I’m not happy, although I think that by the end of the season -if we give one hundred percent- we will be fighting to enter the Top 5.”

Albert Arenas (DNF):
“The only positive we can take away from today is that I was unhurt in the crash, but it was a good weekend and we leave Misano emptyhanded. I thought that I had been hit from behind, as it was a very strange fall; I lost rear grip without any warning. These things happen, and I hope to keep the same good feeling going next weekend in Aragon.”