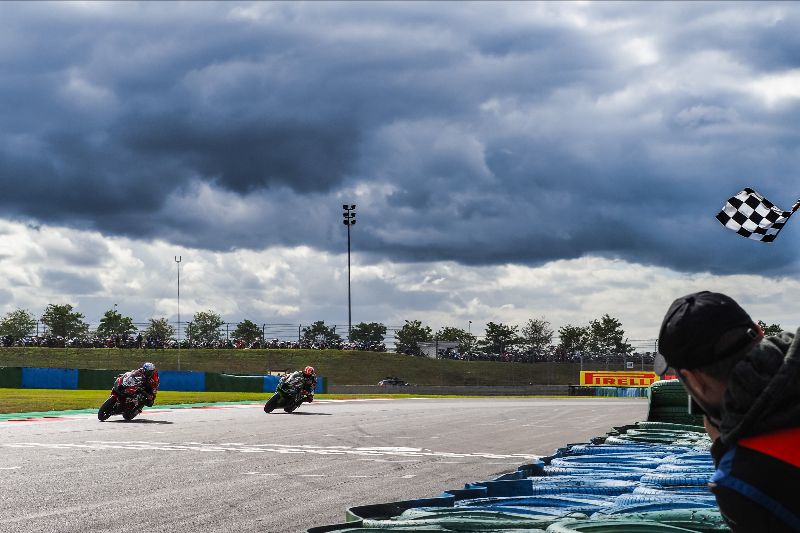 The Pirelli French Round produced one of the races of the WorldSBK season so far as five different riders lead at various stages, before Michael van der Mark (Pata Yamaha WorldSBK Team) crashed out of the lead three laps from home, seemingly handing victory to Jonathan Rea (Kawasaki Racing Team WorldSBK), before a stunning final lap saw Toprak Razgatlioglu (Turkish Puccetti Racing) take the spoils, despite starting from the sixth row.

As the race got underway, Jonathan Rea came under immediate pressure from Michael van der Mark with two almost colliding into the Adelaide hairpin on lap one. Their duel allowed Tom Sykes (BMW Motorrad WorldSBK Team) to storm through from sixth on the grid to second by the end of lap one.

Sykes’ progress continued on Lap 2 as he used the corner speed of the BMW to overtake Rea at Estoril, although the leading group was growing and growing with Chaz Davies (ARUBA.IT Racing – Ducati) joining the action from 11th on the grid, while a remarkable early charge brought Toprak Razgatlioglu into play, despite starting down in 16th.

On Lap 3, Davies became the third different leader in as many laps but the Welshman’s challenge came to a dramatic end moments later with a crash into Turn 15. Davies’ lost the front end of his machine with second-placed Toprak Razgatlioglu fortunate to stay upright despite slight contact from the errant Ducati. The chaos allowed Sykes a moment of breathing space but the BMW rider was quickly reeled in, losing the lead to Michael van der Mark on Lap 6.

With the battle continuing to rage in the leading group, van der Mark was able to open up a slight advantage while Jonathan Rea came under intense pressure following a moment at the Nurburgring chicane. Toprak Razgatlioglu was able to edge ahead, setting the fastest lap in the process, but Rea ultimately regained P2 from the Turkish rider shortly after half-distance, allowing him to give chase after van der Mark who was 1.2 seconds to the good.

Behind the leading trio, Loris Baz (Ten Kate Racing – Yamaha) had established himself in an excellent fourth with Tom Sykes settling in fifth after an all-action start. Alex Lowes (Pata Yamaha WorldSBK Team) was holding sixth but the Briton was coming under increasing pressure from Alvaro Bautista (ARUBA.IT Racing – Ducati) as the Spaniard chased valuable championship points. Leon Haslam (Kawasaki Racing Team WorldSBK) was also in the thick of the action but a highside at the final chicane eliminated him five laps from home.

With clear track in front, Jonathan Rea began his relentless chase of Michael van der Mark, wiping out his advantage heading into the closing stages. With three laps remaining, the leading pair were together but van der Mark’s hopes of a second victory of 2019 were extinguished when the front end of his Yamaha folded into the Adelaide hairpin, the pressure proving too much.

Rea seemed on course for a 12th victory of the season, beginning the final lap one second clear of Razgatlioglu but a stunning final lap from the Turkish rider brought him right into the tail of the Ulsterman entering the last sector. Under braking for Turn 15, Toprak dived up the inside with Rea keen to avoid a costly collision, opting to settle for second.

The fight for the final podium spot also went down to the wire with Tom Sykes rallying in the latter stages to overhaul Loris Baz, securing BMW’s fourth podium of the season. Baz held on to fourth while Alvaro Bautista recovered up to fifth in the end.

In the end, van der Mark remounted to finish 13th to secure three points which may prove valuable in the ever-tightening race for third in the championship standings. At the top, Jonathan Rea has extended his advantage to 100 points over Alvaro Bautista, and the possibility remains of a fifth title being clinched tomorrow.

After showing a preview of his potential on Friday afternoon, Kyle Smith (Team Pedercini Racing) proved to be in a class of his own in the wet, claiming his first ever pole position in WorldSSP. The championship battle looks set to play out from the second row after a fascinating Tissot Superpole session at Magny-Cours.

With conditions still wet following rain earlier this morning, the opportunity was presented for Kyle Smith who showed such strong pace in the wet yesterday. The Briton set an astonishing early benchmark, opening up a lead approaching two seconds over Lucas Mahias (Kawasaki Puccetti Racing). For Smith though, his progress was halted by a fall at the Adelaide hairpin halfway through the session.

Mahias wouldn’t be threatening top spot though as the 2017 champion came unstuck at exactly the same corner as Smith, losing the rear end of his Kawasaki exiting turn five. With the lap times constantly improving, the Frenchman was soon relegated from the front row by Jules Cluzel (GMT94 YAMAHA) and Ayrton Badovini (Team Pedercini Racing), although the Italian rider saw his session ended early by a crash at Estoril corner.

In the end, Smith was able to re-join the action after his early fall and quickly showed that the mishap hadn’t dented his confidence. As the chequered flag waved, Smith improved still further to open up a 0.810s advantage over Jules Cluzel who will go in search of a second consecutive home victory as he bids to keep his slim title hopes alive. Despite his late fall, Ayrton Badovini held on for his first front row start since Magny-Cours 2016.

The championship challengers went head-to-head in the dying seconds with Federico Caricasulo (BARDAHL Evan Bros. WorldSSP Team) securing a narrow advantage over his team-mate Randy Krummenacher, despite missing out on the front row for the first time this season. Caricasulo will line up fourth, just ahead of Lucas Mahias with Krummenacher rounding out the second row in sixth.

The Kawasaki-Yamaha pattern continues onto the third row with Hikari Okubo (Kawasaki Puccetti Racing) in seventh, who maintains his 100% record of qualifying inside the top nine this year. Friday pacesetter Corentin Perolari (GMT94 YAMAHA) will start eighth for his home round ahead of Isaac Vinales (Kallio Racing) while Peter Sebestyen (CIA Landlord Insurance Honda) ensured that Honda were represented inside the top ten.

Elsewhere, Guilaume Pot (Team MHP Racing-Patrick Pons) suffered a crash at Estoril corner, causing him to miss out on the 107% cut-off time, while Thomas Gradinger (Kallio Racing) was the last rider inside the target time in 21st as he makes his return to WorldSSP from injury.

Early rain and a drying track changed the complexion of Tissot Superpole in the WorldSSP300 class. With the championship potentially up for grabs at the Pirelli French Round, Scott Deroue (Kawasaki MOTOPORT) took a much-needed pole position ahead of Ana Carrasco (Kawasaki Provec WorldSSP300) with points leader Manuel Gonzalez (Kawasaki ParkinGO Team) set for a tough battle tomorrow from the fifth row.

Group A have arguably enjoyed the best of the conditions so far this weekend, with the riders involved benefiting from some dry track time in FP3, something that couldn’t be said for those in Group B. However, with conditions steadily improving during Tissot Superpole, running later looked to be beneficial.

Ana Carrasco showed her pace, and experience, on a damp track surface in Group A to lead the way early on. The reigning champion was knocked off the top by Filippo Rovelli (Kawasaki ParkinGO Team) four minutes from the end but Carrasco responded to finish fastest in her group, eight tenths clear of Galang Hendra Pratama (Semakin Di Depan Biblion Motoxracing).

It quickly became clear that conditions were much more favourable in Group B with Mika Perez (Carl Cox- RT Motorsports by SKM – Kawasaki) beating Carrasco’s earlier benchmark on just his third timed lap. Unfortunately for the 2018 championship runner-up, a crash at turn 9 ended his session three minutes early and with times tumbling so rapidly, Perez only just held onto an automatic starting spot in 30th overall.

In the end, Scott Deroue proved too strong for his rivals in Group B, holding off a late challenge from Andy Verdoia (BCD Yamaha MS Racing) to claim his first pole position since Magny Cours last year, giving the best possible chance of extending the WorldSSP300 title race to the final round in Qatar.

With the lap times in Group B proving over 1% faster than Group A, the grid will be determined by alternating the fastest riders in each group. As a result, Deroue will have Ana Carrasco starting alongside in second with Andy Verdoia completing the front row. Galang Hendra Pratama (Semakin Di Depan Biblion Motoxracing) starts fourth ahead of Jeffrey Buis who ensured two Dutch riders will start inside the top five tomorrow. After finishing third in Group A, Filippo Rovelli will line up sixth on the grid.

Much of the focus in Group B was on Manuel Gonzalez, especially once it became clear that a top 15 place was needed to secure automatic qualification for tomorrow’s race. With less than a minute remaining, the championship leader languished down in 13th, leaving him dangerously close to the lottery of the Last Chance Race, but a last gasp improvement saw him climb to eighth, enough for 15th on the grid.