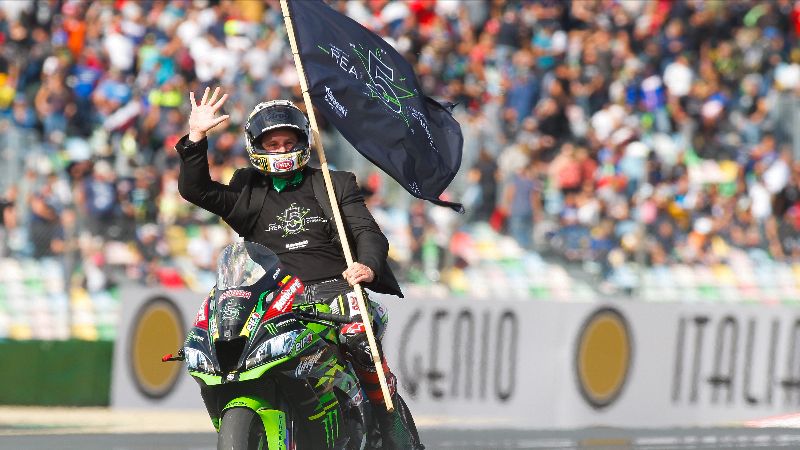 The Pirelli French Round will go down in the history books of the MOTUL FIM Superbike World Championship. It began with Turkey’s first ever winner in Toprak Razgatlioglu (Turkish Puccetti Racing) and finished with Jonathan Rea winning Race 2 to become the championship’s first ever five-time champion following early misfortune for nearest rival Alvaro Bautista (ARUBA.IT Racing – Ducati).

Starting from pole position for the first time in WorldSBK, Toprak Razgatlioglu couldn’t make the same lightning start which saw him leap up the order in the two previous races. Rea edged up the inside into Turn 1 to grab the lead but he wouldn’t stay ahead for long, as Michael van der Mark (Pata Yamaha WorldSBK Team) used the slipstream to hit the front at the Adelaide hairpin.

The moment which ultimately proved decisive in the 2019 MOTUL FIM Superbike World Championship came on Lap 2 as Razgatlioglu lost the rear of his Kawasaki on the exit of Turn 13. As the Turkish rider fought to control the slide, Alvaro Bautista was powerless to avoid the Race 1 winner and both riders were eliminated on the spot. With the words ‘BAUTISTA OUT’ displayed on his pit-board next time around, Rea now knew that a race victory would see him make history.

Michael van der Mark was keen to ensure that Rea didn’t have an unchallenged run to a fifth WorldSBK crown, keeping the Ulsterman at bay until the Imola chicane on Lap 6. The Dutchman didn’t trail for long with the Yamaha proving a formidable motorcycle down the back straight towards Turn 5, an advantage van der Mark utilised to power past on Lap 8.

As the race ticked over half distance, Rea mounted another attack on the leader with van der Mark going defensive into Adelaide. The championship leader was wise to this tactic though and drew alongside into the following Nurburgring chicane, making the move stick on Lap 13. With van der Mark no longer close enough to make use of the slipstream next time around, Rea had the margin he needed to ease clear.

Despite a valiant effort from van der Mark, the advantage grew to over one-second, allowing Rea to close out the final laps and claim his 12th victory of 2019. This one was the sweetest of all though as he completed one of the great WorldSBK comebacks. From 61 points behind, Rea now holds an unassailable 129-point advantage and a place in the history books as the first ever five-time WorldSBK champion.

Alex Lowes (Pata Yamaha WorldSBK Team) completed the team’s first double-podium of the season with a close third, consolidating third in the championship standings, while Chaz Davies (ARUBA.IT Racing – Ducati), who was heavily delayed in the early collision between his team-mate Alvaro Bautista and Toprak Razgatlioglu, recovered to finish fourth, overtaking home favourite Loris Baz (Ten Kate Racing – Yamaha) on Lap 14. Despite a late challenge from the Frenchman, he was forced to settle for fifth, completing a positive weekend at his home round as the Top Independent Rider in Race 2.

Marco Melandri (GRT Yamaha WorldSBK) closed out the final European round of his WorldSBK career with a strong charge from 15th on the grid to sixth, winning a close three-way fight on the last lap. The Italian finished just a tenth of a second clear of Leon Haslam (Kawasaki Racing Team WorldSBK) with Tom Sykes (BMW Motorrad WorldSBK Team) right behind the pair in eighth.

Leon Camier (Moriwaki Althea Honda Team) capped off an impressive comeback to the MOTUL FIM Superbike World Championship with ninth place, finishing a second clear of Jordi Torres (Team Pedercini Racing). Elsewhere, there were points for French wildcard Sylvain Barrier (Brixx Performance) in 13th but disappointment for Sandro Cortese (GRT Yamaha WorldSBK) who was forced to retire midway through the race while running in the top ten.

Unpredictability reigns in a dramatic WorldSSP race at the Pirelli French Round as championship favourites Randy Krummenacher and Federico Caricasulo (BARDAHL Evan Bros. WorldSSP Team) both crashed out to leave the championship finely poised. This left the door open for Lucas Mahias (Kawasaki Puccetti Racing) to claim his first win of the season after a thrilling last lap scrap with Isaac Vinales (Kallio Racing).

As the race got underway, Jules Cluzel (GMT94 YAMAHA) immediately grabbed the lead from first-time polesitter Kyle Smith (Team Pedercini Racing) but there was drama behind with three riders colliding at Turn 1. Maximilien Bau (GMT94 YAMAHA), Nacho Calero (Orelac Racing VerdNatura) and Federico Fuligni (MV AGUSTA Reparto Corse) were the riders involved with the red flags immediately brought out. All three riders were conscious although they will be transported to Nevers hospital for further assessments.

The quick restart procedure was brought into effect and Cluzel made no mistake once again, edging ahead of Smith. The shortened 12-lap race exploded into life moments later as Randy Krummenacher highsided on the exit of the 180 corner. The Swiss rider was lucky to be avoided by Lucas Mahias, who was forced to take avoiding action, but his exit presented team-mate and title rival Federico Caricasulo with a golden opportunity.

The Italian responded by grabbing the lead on the second lap, slipstreaming past Cluzel and Ayrton Badovini (Team Pedercini Racing) on the way into the Adelaide hairpin on Lap 2. The astonishing WorldSSP title battle took another unbelievable twist on Lap 4 though as Caricasulo, enjoying a two-second lead lost the front end of his Yamaha at Turn 13. He did remount and appeared on course to salvage some points before a second crash at Estoril ended his afternoon.

The championship fight now seemed to swinging in Jules Cluzel’s direction but the Frenchman couldn’t keep a busy pack of riders at bay. Isaac Vinales hit the front for the first time shortly after half distance with Lucas Mahias following through into second, setting the stage for a battle between the two that would keep us guessing all the way until the finish. Cluzel was also powerless to prevent Ayrton Badovini and a fast-finishing Raffaele De Rosa (MV AGUSTA Reparto Corse) moving through, leaving him to dispute fifth place with Hikari Okubo (Kawasaki Puccetti Racing).

The corner speed of the Kawasaki in the hands of Lucas Mahias was proving a formidable prospect, with the 2017 champion cutting underneath Vinales at Estoril on Lap 8. Although the Spaniard would out-drag his opponent to the Adelaide hairpin, Mahias regained the advantage after a superior run through Imola put him in position to outbrake the Yamaha into Turn 13.
The race reached a thrilling conclusion with Vinales regaining the lead on the penultimate lap, but cheered on by the enthusiastic French crowd, Mahias shadowed the Spaniard through the final lap before diving up the inside into Turn 13. Vinales had one last opportunity on the approach to the tight right-hander of Turn 15 but Mahias took the perfect defensive line, covering the inside and holding on for Kawasaki’s first WorldSSP victory since Kenan Sofuoglu at Portimao in 2017, ending Yamaha’s 24-race winning streak in the class.

The battle for third was also settled at Turn 15 on the last lap with Ayrton Badovini outbraking Raffaele De Rosa as MV Agusta missed out on a first podium since Imola. Hikari Okubo got the better of Jules Cluzel for fifth in the end with the GMT94 YAMAHA rider scoring ten valuable points to keep his slim championship hopes alive, closing to within 38 of series leader Randy Krummenacher.

Corentin Perolari (GMT94 YAMAHA) followed his team-mate home in seventh with Thomas Gradinger (Kallio Racing) producing an impressive recovery ride on his return from injury, climbing from 21st on the grid to finish eighth. Polesitter Kyle Smith ultimately faded back to ninth, although this result was enough to crown him Europe Supersport Cup winner for 2019. Peter Sebestyen (CIA Landlord Insurance Honda) completed a top ten which included all four manufacturers.

The Supersport World Championship now moves on to the Motul Argentinian Round at the Circuito San Juan Villicum with Randy Krummenacher retaining his ten-point lead over team-mate Federico Caricasulo. Jules Cluzel still holds an outside chance of the crown with two races remaining.

The Pirelli French Round saw a special moment in the FIM Supersport 300 World Championship as Ana Carrasco (Kawasaki Provec WorldSSP300) claimed her second victory of the season, while also handing over her crown to Manuel Gonzalez (Kawasaki ParkinGO Team) who clinched the 2019 title with second place, succeeding Carrasco as world champion.

Chasing the victory he needed to keep his title hopes alive, Scott Deroue (Kawasaki MOTOPORT) made the perfect start to lead the opening lap although several riders were eying up the all-important slipstream which makes such a difference in WorldSSP300. Gonzalez was faced with a tricky task of picking his way through the traffic but the 17-year-old made steady progress, climbing to fourth by the end of Lap 2.

Gonzalez hit the front for the first time on Lap 4, drafting past Carrasco on the run towards the Adelaide hairpin, but with no-one able to escape the group, the championship leader soon slipped back into the pack. A leading group of four was soon established at the front though with Carrasco, Gonzalez and Deroue joined by Andy Verdoia (BCD Yamaha MS Racing) while Galang Hendra Pratama (Semakin Di Depan Biblion Motoxracing) fell back after a brief spell out front.

Mindful that third place would guarantee the championship even if Scott Deroue won, Manuel Gonzalez will have been happy to see such a small leading group and rode a mature race, keeping his title rivals in sight at all times. Deroue wasn’t giving it up without a fight though and set a New Record on the penultimate lap as he desperately tried to improve on fourth. The fight for the win was settled in Carrasco’s favour though courtesy of a last lap move on Verdoia at the 180 corner, while Gonzalez made sure of the title by outbraking the French rider, and Deroue into Turn 15 to snatch second.

As a result, Gonzalez becomes the youngest ever world champion in motorcycle road racing history, and follows in the footsteps of Carrasco and Marc Garcia (DS Junior Team) as the third WorldSSP300 champion, each hailing from Spain. Gonzalez also sets a new points record for a single season in the class with today’s result, and has the opportunity to add to that tally at the final round of the season at Losail in October.

Scott Deroue took the final podium position, and now goes to Qatar level on points with Carrasco in the battle to finish championship runner-up, while Andy Verdoia maintains an outside chance after finishing fourth. Galang Hendra Pratama finished a lonely fifth in the end while Livio Loi (2R Racing Team), winner of yesterday’s Last Chance Race, stormed through the field from 29th on the grid to take sixth.