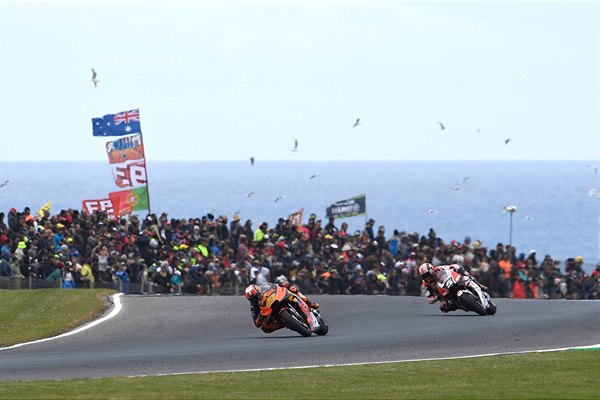 Proceedings around the epic landscape of Phillip Island began with a busy Sunday schedule as the postponed Q1 and Q2 qualification sessions from Saturday took place shortly after warm-up and in chilly, breezy but dry conditions. The Red Bull KTM riders then occupied their slots on the grid accordingly with Pol Espargaro in 17th.

The 27 laps of the MotoGP race – the 31st at Phillip Island – began with Espargaro sliding into mid-pack and just outside the top ten as he steered the KTM RC16 in search of optimum grip. The Spaniard earned 12th place and four more FIM World Championship points.

MotoGP now moves onto a third consecutive race and the heat and humidity of Sepang in Malaysia.

“It was a complicated weekend. We struggled for grip and traction. In 2017 we were much faster but we had a lot of problems here last year and again this weekend. I think part of it is down to the weather and all the changes we have to make to the bike. Anyway we need to look at the bigger picture and the whole season has been much better. We cannot explain this one track but I think this is part of developing a bike and making it better for every circuit. We will reset in Malaysia. In the worst conditions we took four points and were fourteen seconds from the podium – which is not good – but not horrible. After a difficult weekend we’ll take this.”