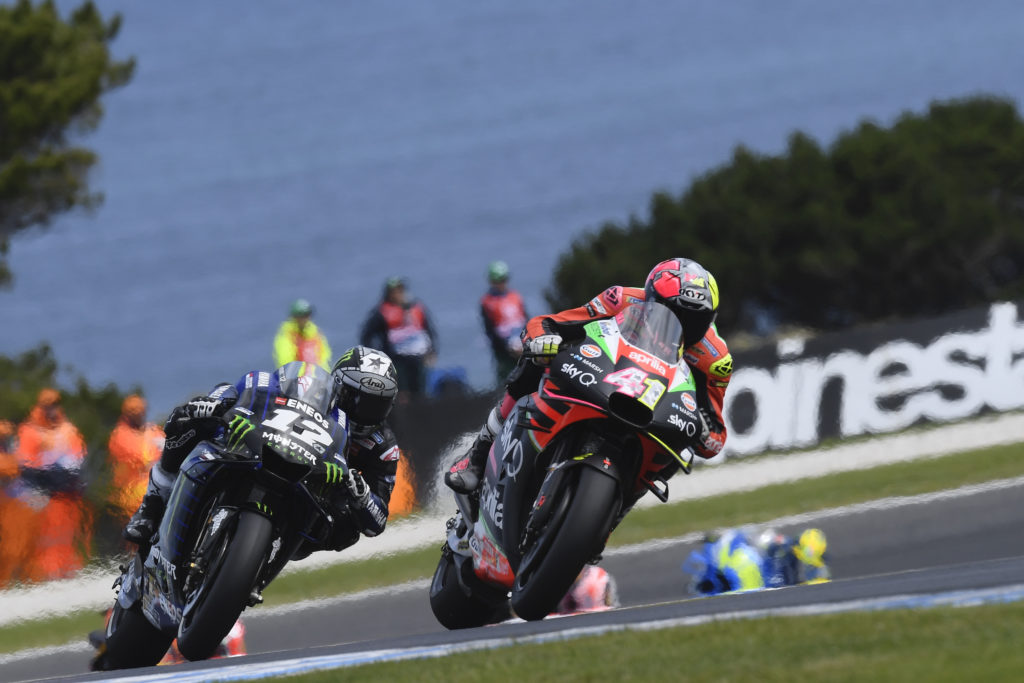 With its riders putting in an outstanding performance, Aprilia was one of the protagonists in the Australian GP. Starting very well from the third row – Aprilia had never before had two riders in the top ten on the starting grid – Andrea and Aleix settled in stably with the lead group. In the early stages, they occupied third and fifth place for quite a while with Andrea who, on the third lap, even had the satisfaction of overtaking Márquez and then Crutchlow for first place. Starting with the soft on the rear, they both had to manage the natural wear of the tyre but they never gave up, playing key roles in the leading pack and, after Viñales and Márquez pulled away, in the group battling for the podium.

In the end, Andrea took home a nice sixth place, finishing just 7.8 tenths from the podium, while Aleix finished tenth as a testament to the overall great performance of the RS-GP on the demanding and beautiful Phillip Island circuit.

This is Aprilia’s best placement ever in the history of MotoGP, where two bikes from Noale had never been so high in the rankings and so close to the podium. The result comes at the end of a primarily positive weekend where the RS-GP machines had been consistently fast in practice and in qualifying, with Andrea finishing Q1 in second place, going through to Q2, and Aleix second in the morning warm up session.

“This is a special track for us, different from the other circuits, and I had fun straight away as soon as we got here. We stayed consistently with the best group which was battling for the podium in a fun race with a lot of overtaking. It seemed like a Moto3 race, but with a lot faster and heavier bikes! In order to be even more competitive, I would have needed more grip on the rear, so I was unable to ride exactly as I expected, having to make up a lot of ground in braking.”