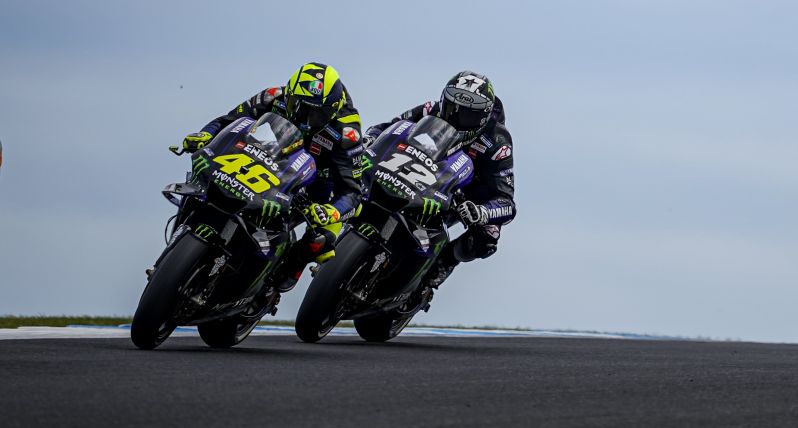 The Monster Energy Yamaha MotoGP Team went through highs and lows in today’s 27-lap race. Maverick Viñales was in the lead for the majority of the race but crashed out during a last-lap duel for the victory.

Viñales started from pole but got swallowed up by the field in the first corner. The Spaniard settled into sixth position and gradually made his way up again. He overtook two riders, including his team-mate who had led the opening laps, to get to fourth. Next on his list were Andrea Iannone, Marc Marquez, and Cal Crutchlow. One by one the Yamaha rider steadily picked them off. On lap 10 he hit the lead for the first time, with Marquez on his heels.

The number-12 rider held firm, maintaining his P1 spot until the start of the very last lap. Forced to let his rival pass him on the long straight before going into Turn 1, Viñales was pushing to the limit to fight back. Marquez was unable to shake him off, but Top Gun Maverick couldn‘t find a way through. Then drama struck in the final sector, when he suffered a high-speed crash. He was able to walk away from the incident without any injuries but ended the race with an NC score.

Viñales remains in fourth place in the championship standings, 7 points from the rider in third place. Rossi holds seventh in the overall rankings, 23 points behind his team-mate. Yamaha maintains third position in the constructor standings, and Monster Energy Yamaha MotoGP also stay in third place in the team classification.

The team will resume the MotoGP action at the Sepang International Circuit next weekend for the Malaysia Motorcycle Grand Prix, held from November 1st – 3rd.

“I started the last lap much tighter to the curb to have the chance, if Marc would overtake at the last moment, to brake later. But he overtook me before the finish line. Then I was planning to push to the maximum in sector 3 to overtake in Turn 10, and that’s what I did. So, before I crashed, I was ready to go in without braking to see what would happen, but I locked the rear. Maybe I made a mistake, I don’t know, and then I just fell down on the other side. Today was a race to win, not to be second. I had the chance, so I tried. Anyway, for me it was a very positive race, I crashed but I was satisfied. I gave my best on every lap and the bike was working in a really good way.”