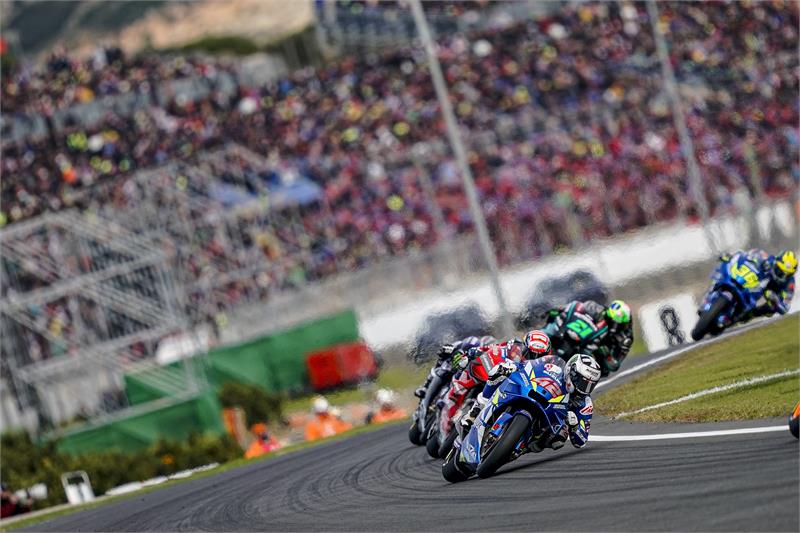 The season finale of the 2019 MotoGP Championship ended with a pair of consistent finishes for the Team SUZUKI ECSTAR’s riders. And a full house enjoyed Ricardo Tormo’s ‘stadium’ views for the 27 lap race in Valencia.

Alex Rins started strongly, slotting into 3rd place immediately. He then proceeded to spend a large majority of the race in 4th place, showing consistent pace. Joan Mir took 8th off the start and found himself in a ‘safe’ Top 10 position with clear air around.

At the mid-way point of the race, Rins was in 5th place but looking determined to go after a podium as he kept Dovizioso and Miller in sight. As the end of the race neared, the Spanish rider began to close Dovizioso, getting very close to him in the closing laps. However, after struggling to pass he brought home a solid 5th place finish – his 11th Top 5 placement of the year.

Mir finished his rookie season with a consistent 7th place, he struggled a little to capture the same feeling as he had throughout Friday and Saturday but was nevertheless pleased to end the season with a good finish.

Alex Rins:
“For sure, this year has been really good, I was fighting for 3rd in the championship. I tried hard today to take back 3rd in the standings, and I was able to beat Viñales who was my nearest rival for that. I was battling with Dovizioso right up to finish line, but it was very difficult to pass him. Let’s keep working and prepare for the new season!”

Joan Mir:
“This race was a bit frustrating for me, because I couldn’t find the same feeling as I had during the practices. It was a shame, but I was still able to fight well, and I was close to the Top 5 and close to riders who have won races this year. I thought I had something more to offer in this race, but I’m happy regardless. This rookie year has been really nice, and I’m looking forward to next year already. I’m very excited for the test next week too.”