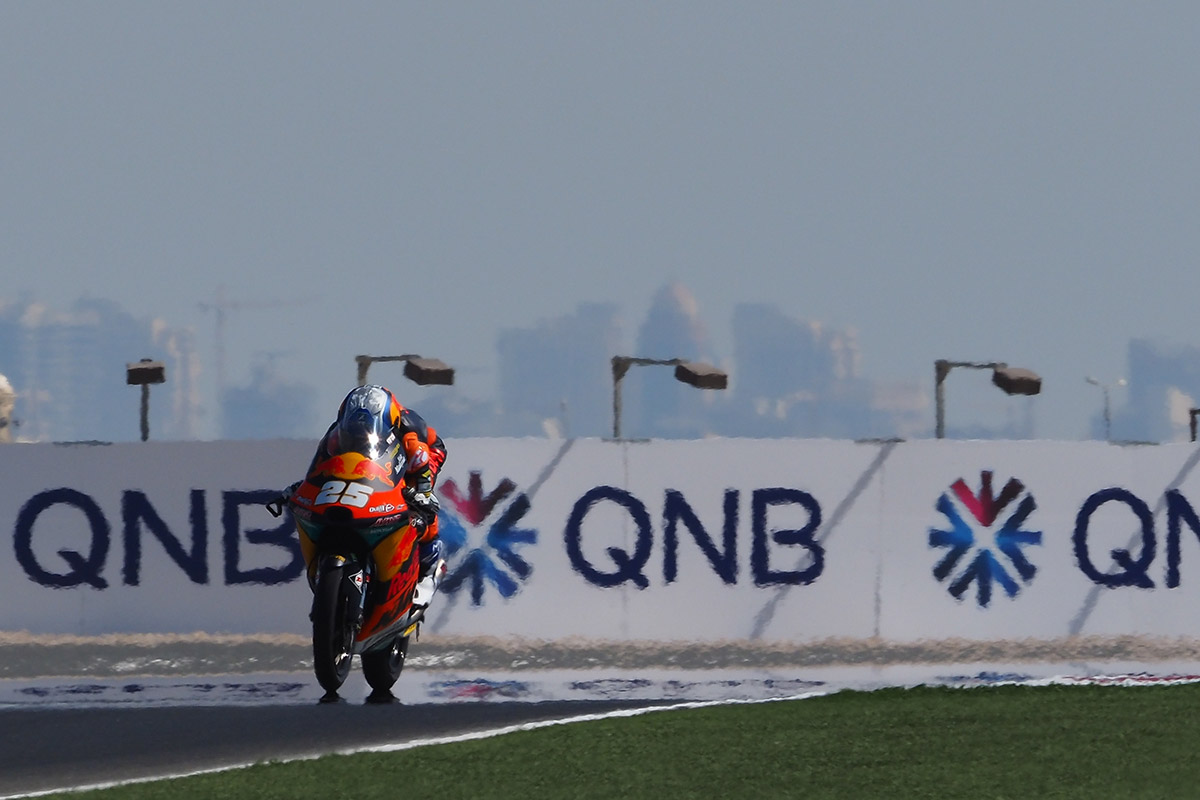 After some impressive form in preseason testing at Losail International Circuit, Joe Roberts (American Racing) came out swinging on Day 1 of the QNB Grand Prix of Qatar and smashed the lap record in FP2 to end Friday on top. The American was nearly two and a half tenths clear of his closest competition, Marco Bezzecchi, with Luca Marini in third as Sky Racing Team VR46 riders completed the top three.

Free Practice 1 in the sun began with Tom Lüthi (Liqui Moly Intact GP) topping the timesheets, but the Swiss veteran had a tricky start to FP2 after crashing at Turn 14 while on a session best lap – rider ok. There were no such troubles for Tetsuta Nagashima (Red Bull KTM Ajo) though as the Japanese rider, who finished P11 in FP1, shot to the top of the times with the fastest lap of the weekend, and he remained near the top by the end of play too. In the early stages, plenty of riders were beating their FP1 times, and by the end all those down to Lüthi in 11th overall had gone faster. The Swiss rider also suffered a second crash and headed for the Medical Centre – rider fit.

By the end of the shuffle it was Roberts who moved up from having taken fifth in FP1, the American blasting the lap record and Bezzecchi then moving up to second on his final lap. Marini took third, less than a tenth off his teammate, with Nagashima pushed down to P4.

Xavi Vierge (Petronas Sprinta Racing) had a better afternoon to finish P5 overall, the Spaniard having crashed in FP1, and FP2 crasher Augusto Fernandez (EG 0,0 Marc VDS) slipped to P6 after his tumble ended his session early. Bo Bendsneyder (NTS RW Racing GP) had a great FP2 to finish P7 overall on Day 1, the Dutchman moving up from P18 in FP1 and putting in one of NTS’ best sessions to date.

Now into his second year of Moto2™, Enea Bastianini (Italtrans Racing Team) ended the day in P8 despite a crash, edging out compatriot and fellow sophomore Nicolo Bulega (Federal Oil Gresini Moto2). Jorge Martin (Red Bull KTM Ajo), who was second in FP1, slipped to tenth despite marginally improving his laptime – but he did clock the fastest ever Moto2™ speed at Losail: 296.7km/h.

Lüthi was P11, ahead of the Qatar Test’s fastest man: Jorge Navarro (Beta Tools Speed Up), who crashed on Day 1 too. Marcel Schrötter (Liqui Moly Intact GP) was next fastest, ahead of Aron Canet (Aspar Team), with the Spaniard the fastest rookie once again – and currently the last man who would move through to Q2.

Remy Gardner (Onexox TKKR SAG Team) suffered a spectacular highside on the exit of Turn 1 in FP2, the Australian heading to the medical centre for a checkup, and Lorenzo Baldassarri (Flexbox HP 40) was another high profile crasher on Friday.

Moto2™ is set to light up Qatar again on Saturday as Roberts heads a top 18 split by less than a second. What a way to start the year in the intermediate class as qualifying starts to rear its head on the Doha horizon. Tune in for Moto2™ FP3 at 13:50 local time (GMT+3), with Q1 getting underway at 18:00.

The wait is over and Moto3™ are officially back in action at the QNB Grand Prix of Qatar, with Raul Fernandez (Red Bull KTM Ajo) the man opening his 2020 account on top. The pace was pretty hot on Day 1 as the Spaniard ended Friday just 0.019 shy of Aron Canet’s lap record at Losail International Circuit, with Darryn Binder (CIP Green Power) in second but a tenth back. Sergio Garcia (Estrella Galicia 0,0), our most recent race winner until the grid have a chance to try and change the fact on Sunday, completed the top three after also having gone fastest in FP1.

Friday saw sun blaze throughout the day and a little less wind than had plagued the venue at times during the recent test, and it was largely a drama-free affair with most of the field improving their laptimes in a duskier FP2. The timesheets promise plenty from the race, however, with the speed already there on Day 1 as Fernandez homed in on that lap record – and only a tenth and a half separating the top three. In addition, the previous top speed in Moto3™ fell by the wayside as Jaume Masia (Leopard Racing) upped it from 240.3km/h to 245.4.

Fourth went the way of Honda Team Asia’s Ai Ogura, who was second fastest in testing in Qatar, as he moved up the timesheets on his final attempt and got ahead of compatriot Kaito Toba (Red Bull KTM Ajo) – last year’s race winner. He was the last man in the 2:04s, with Tony Arbolino (Rivacold Snipers Team) putting in a 2’05.227 for sixth.

Andrea Migno (Sky Racing Team VR46) was seventh and improved a whopping 1.7 seconds from his FP1 time, with Masia in P8 and over a second quicker in FP2 than his previous best. Romano Fenati (Sterilgarda Max Racing Team) was only 0.016 back from the Spaniard as he leapt up the timesheets and put his Husqvarna in ninth on the manufacturer’s return to the class, with Deniz Öncü (Red Bull KTM Tech 3) completing the top ten – a familiar sight so far – as fastest rookie. The Turkish rider was only 0.007 off Fenati, too.

Migno and Albert Arenas (Aspar Team) were both crashers in FP1, but nobody slipped off during the second session of the day for the lightweight class. Now all focus switches to Saturday’s FP3 session and the fight to earn a place directly in Q2, which in Moto3™ is reserved for the fastest 14. via the top 14. Tune in as that begins at 12:55 (GMT+3) local time before qualifying starts at 17:05.