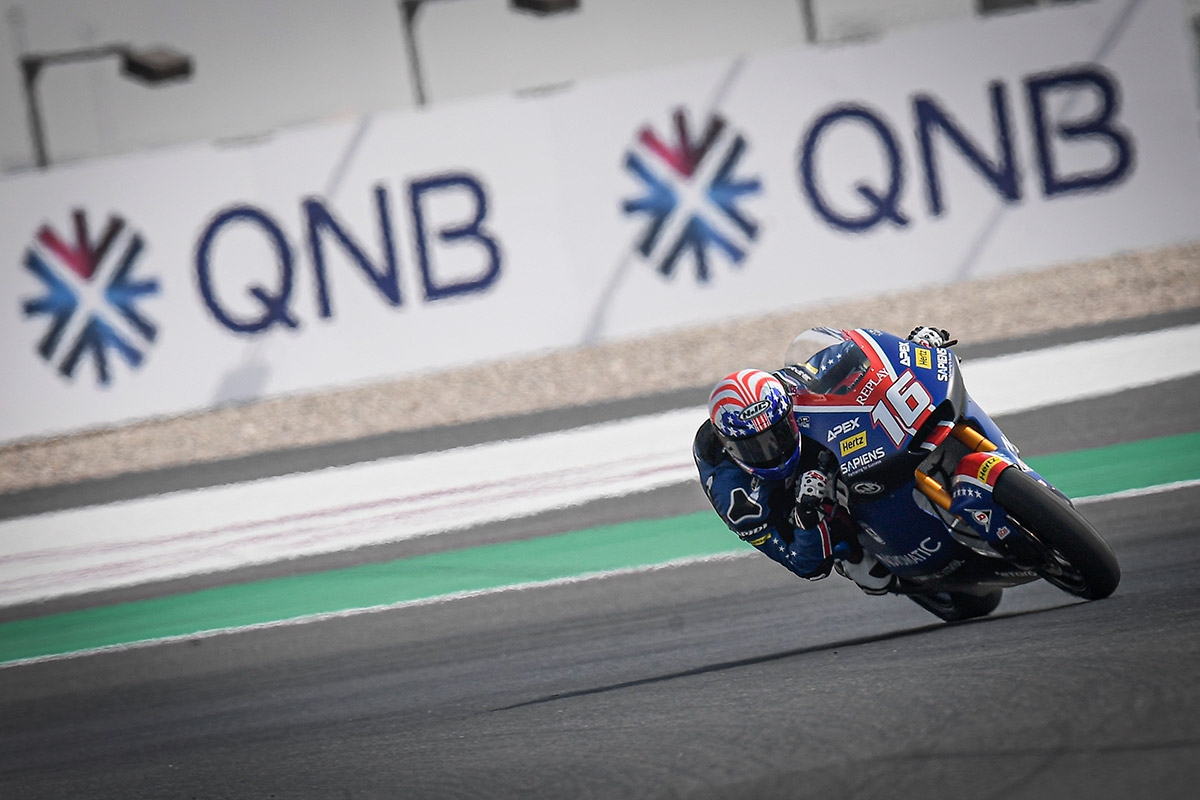 Joe Roberts (American Racing) slammed in a stunning 1:58.136 in Moto2™ Q2 at the QNB Grand Prix of Qatar to set a new lap record and earn his maiden Grand Prix pole position, thus giving the USA their first intermediate class and Grand Prix pole in a decade*. The Free Practice pacesetter’s qualifying time was exactly the same as second place Luca Marini’s (Sky Racing Team VR46), however, so he also shares the new lap record, but Roberts’ second best lap was faster to give him pole. Enea Bastianini (Italtrans Racing Team) impressed to take P3 and complete the first Moto2™ front row of the season.

Under the Losail lights, the Moto2™ pace was electrifying from the off as qualifying began. In Q1 Marcel Schrötter (Liqui Moly Intact GP) went just a thousandth of a second of Roberts’ Friday lap record and at the beginning of Q2, fellow Q1 graduate Jorge Navarro (Beta Tools Speed Up) set a 1:58.396 to really set the scene for a cracking first Moto2™ qualifying of 2020. Tucked in behind teammate Marco Bezzecchi, Marini then went P2 as the Sky Racing Team VR46 duo sat P2 and P3 in the early stages, but it was an ever-changing affair on the timing screens.

After impressing in Free Practice, Bo Bendsneyder (NTS RW Racing GP) then went just 0.014 off Navarro’s time to launch himself to a provisional front row start, but Roberts – having pitted in the early stages in the session – was setting red sectors. On his opening flyer, lapping by himself, the number 16 went to P3 as 0.051 split the leading trio halfway through the session, although it remained anybody’s guess as to who was going to grab pole.

Marini launched an attack next, the Italian setting a new lap record to go P1 with seven minutes remaining. But Roberts wasn’t done, and the American then flashed across the finish line and set the exact same time as his counterpart – but taking pole, with a quicker second fastest lap.

It still wasn’t over then though, as ‘The Beast’ turned up the wick in the east to propel himself into P3. Bastianini ended up just over a tenth shy of Roberts and Marini to secure his first Moto2™ front row.

Heading Row 2 is Navarro, the Spaniard will be happy with that having come through Q1, with Bendsneyder doing a sterling job on the NTS bike to sit P5 on the grid for Sunday’s race – that’s the Dutchman’s best Moto2™ qualifying result. Despite having suffered two crashes in Free Practice, Remy Gardner (Onexox TKKR SAG Team) kept it rubber side down in qualifying to earn an impressive P6 and complete the second row.

Bezzecchi got his best lap time in on his final lap to start from P7, the Italian leading Jorge Martin (Red Bull KTM Ajo) and Q1 graduate Lorenzo Baldassarri (FlexBox HP 40) on the third row. Xavi Vierge (Petronas Sprinta Racing) stuck in a late flyer to grab a top 10 slot on the Qatar GP grid, putting in a red sector before his laptime started to fade…

It was a day to forget for a couple of key names including Tom Lüthi (Liqui Moly Intact GP) as the Swiss veteran and expected challenger was P18 after a tough qualifying. But he’s nearly within a second and only six tenths split Roberts to 16th place Aron Canet (Aspar Team) in Q2 as we get set for what looks to be a monumentally good opening intermediate class race of the year. Tune in at 18:00 local time (GMT+3) to watch Roberts and co. do battle under the lights.

There were a few nerves late on for Tatsuki Suzuki in qualifying at the QNB Grand Prix of Qatar, but the SIC58 Squadra Corse rider nevertheless took his second career pole position as he ended Q2 0.008 ahead of Friday’s fastest man Raul Fernandez (Red Bull KTM Ajo) – and after coming through Q1. It’s also despite the Japanese rider missing the chance at a final flying lap due to a delay getting out, the number 24 left to wait and see if anyone could beat his best. Fernandez tried and only just came up short, with fellow KTM rider Albert Arenas (Aspar Team Gaviota) completing the top three after, like the polesitter, coming through Q1.

The only man to then beat it was Suzuki as the number 24 took over at the top, and that was actually the battle over – but the tension remained to the wire. He wouldn’t take part however, as he failed to make it back out and over the line as the grid thundered around for a final push…

Fernandez made his leap up the timesheets, Arenas likewise, but Suzuki would remain in the clear for his second pole. CIP Green Power’s Darryn Binder lost out slightly as he was the man pushed back off the front row to fourth, with the first fastest man in the session, Ai Ogura, slotting into fifth. Leopard Racing’s Jaume Masia completes the second row.

With the top 14 separated by just seven-tenths of a second, tomorrow’s season-opening Moto3™ race looks like being another classic under the lights. However, everyone on the grid will be wary of the fact that the last, and only, time Suzuki sat on pole position at Misano last year, he went on to win the Grand Prix. Don’t miss the 18-lap epic at 14:20 (GMT+3) local time on Sunday.