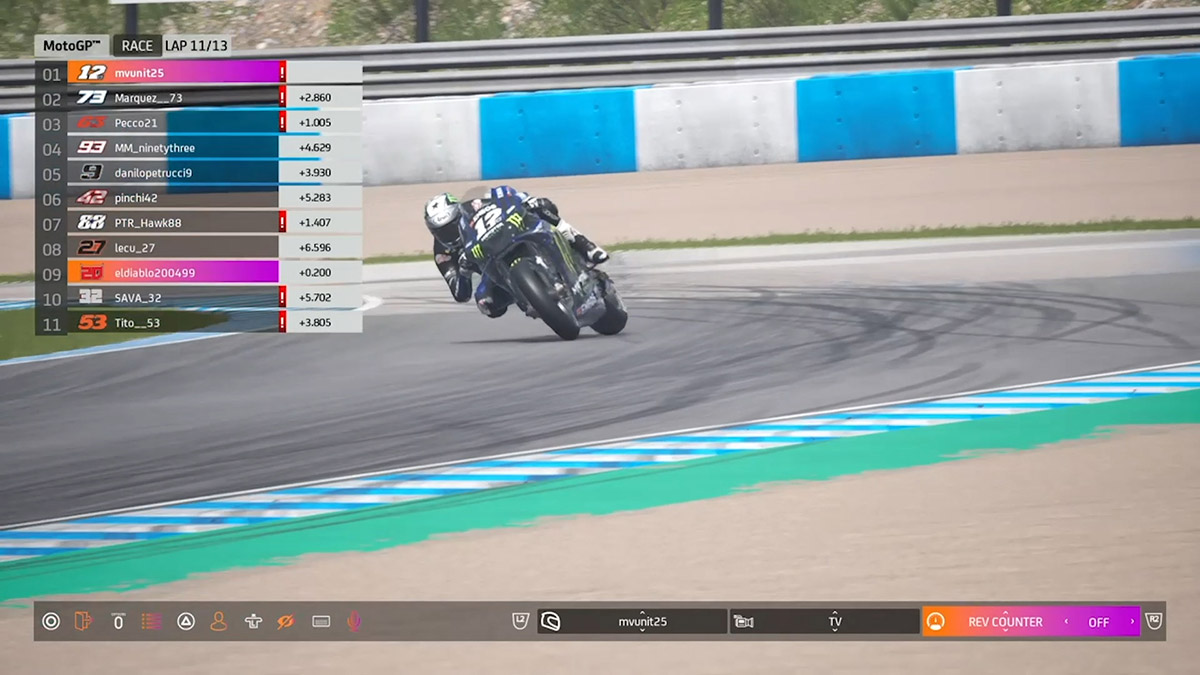 Monster Energy Yamaha MotoGP’s Maverick Viñales has finally tasted Virtual MotoGP™ glory after capitalising on late crashes by Pramac Racing’s Francesco Bagnaia and Repsol Honda’s Alex Marquez in Sunday’s Red Bull Virtual Grand Prix of Spain. The Spaniard was beaten by both Marquez and Bagnaia at Mugello and then by Bagnaia in an epic last-lap scrap at the Red Bull Ring, but it was third time lucky in Jerez as he beat both to clinch victory.

The event is in aid of the official charity of MotoGP™, Two Wheels for Life, raising funds for their campaign to fight Covid-19. The world first Red Bull Virtual Grand Prix of Spain – with three classes all racing – saw some incredible drama and good behind-the-scenes laughs, and you can find out more and contribute to the campaign HERE.

As the lights went out, breath was bated as the opening corner approached and once again it was nothing short of chaos as six riders went down, including poleman Fabio Quartararo (Petronas Yamaha SRT) and eventual race winner Viñales. In the early stages at the front, Bagnaia and Alex Marquez were looking to escape and making themselves some space, but then Marquez crashed out after contact with the Italian in the final sector and it was game back on.

Red Bull KTM Tech 3’s Iker Lecuona found himself in second after he managed to stay clear of the carnage in front of him, but his chances of finishing on the podium evaporated on Lap 3 when he crashed at the penultimate corner. In an incident that also saw Quartararo caught up, suddenly Marc Marquez (Repsol Honda Team) was then promoted to second and had a debut Virtual rostrum finish in his sights… but it was far from over.

The reigning World Champion was put under all sorts of pressure by both Viñales and Alex Marquez after the pair had rediscovered their form following earlier crashes, and both swooped through on the number 93 after a mistake at Turn 2. The trio were split by nothing on Lap 5, but the gaps would quickly grow as Alex Marquez edged clear of Viñales for second and the number 12 did the same to Marc Marquez.

Behind, Quartararo and Lecuona came together again as the Frenchman couldn’t seem to stop crashing; the same issue that cost him in the opening two Virtual MotoGP™ races, but there were a few mistakes up and down the board still to come. At half race distance, Viñales ran wide, allowing Marc Marquez back through for third, but the number 93 didn’t hold the final podium place for long, crashing out just moments later.

With just three laps remaining, Alex Marquez then crashed out of second at Turn 2, only for the leader Bagnaia to then suddenly crash as well, the Italian at the penultimate corner, allowing Viñales to go from third to first in the space of a lap. The Spaniard coped with the pressure in the closing stages and remained cool, calm and collected to take the chequered flag for his first ever virtual victory, particularly sweet after just missing out on his previous two attempts. Alex Marquez ultimately finished second, with Bagnaia dropping down to third but all three once again showing their impressive virtual skills.

Marc Marquez ended up fourth, despite slowing up on the final two laps to have a fight and some fun with Ducati Team’s Danilo Petrucci, coming out on top as the Italian eventually crashed out during that self-made scrap. Team Suzuki Ecstar’s Alex Rins, a big victim of the Turn 1 drama, pounced on Petrucci’s error to take the final top five spot ahead of the Italian in sixth.

Red Bull KTM Tech 3’s Miguel Oliveira came across the line in seventh, ahead of Quartararo, although the Frenchman can take some solace from setting the fastest lap. Lecuona took ninth, ahead of Aprilia’s test rider Lorenzo Savadori in tenth on his virtual debut for Aprila Racing Team Gresini. Tito Rabat (Reale Avintia Racing) took eleventh, and he was also deemed the likely culprit for the Turn 1 chaos – but had no regrets about trying.

Once again we hope you enjoyed the virtual action, make sure to stay tuned to motogp.com and social media for more reactions, clips, interviews and #StayAtHomeGP content from MotoGP™, riders and teams. And don’t forget to visit Two Wheels for Life and donate!

FlexBox HP40’s Lorenzo Baldassarri was eventually able to cruise to victory at the Red Bull Virtual Grand Prix of Spain after somehow managing to stay upright during a raucous fight in the early stages, with Petronas Sprinta Racing’s Jake Dixon and Bo Bendsneyer (NTS RW Racing GP) completing the podium and both after plenty of drama of their own.

The fight raucous fight saw Baldassari battling compatriot Luca Marini (Sky Racing Team VR46) and Dixon on the opening lap at the Circuito de Jerez – Angel Nieto, which eventually saw Marini crash out and Dixon also coming to blows with ‘Baldattack’ after an outrageous divebomb that put the Italian into the gravel. Last year’s Spanish GP winner would eventually recover though and came back past the Briton with ease to take a comfortable win.

Marini had to settle for fourth after being forced wide in that move, the Italian left unable to convert his qualifying pace into a top three, with Red Bull KTM Ajo’s Jorge Martin clinching a top five finish and a moral victory … the Spaniard was the only rider without a time penalty at the conclusion of a hectic 8-lap event.

The victory came from pole but the start couldn’t have got much worse for Rodrigo, with the Argentine slipping down to almost last off the line. Deniz Öncü (Red Bull KTM Tech 3) and Alonso Lopez (Sterilgarda Max Racing Team) similarly had a tough start as they went down at Turn 1, with Dennis Foggia (Leopard Racing) the man taking over in the lead in the early stages. Unprecedented scenes then unfolded at Jorge Lorenzo corner however, with Foggia’s WiFi suddenly saying goodbye and with it, the Italian forced to say addio to the race lead…

Fernandez then took over at the front, with Rodrigo clawing his way back through the pack to P2 and the chase for the lead was on from then on. Fernandez was keeping Rodrigo behind him by just over a second, with Arenas roughly the same distance behind again, but by the start of Lap 4, the Argentine rider had reeled in the KTM in the lead and the battle for P1 began in earnest. Would the polesitter pick off his KTM rival straight away?

The answer for a couple of laps was no as Fernandez dealt with the increasing pressure well, but there was drama to unfold at Dani Pedrosa corner on Lap 6. Rodrigo got the run out of Turn 5 down the back straight and made a lunge for the lead up the inside, but contact was made and the race leader was down – Fernandez tasting the gravel trap and forced to rejoin just behind Arenas. Ultimately, the Aspar rider would hold him off, and the two completed the podium after Rodrigo crossed the line for the victory.

Deniz Öncü wasn’t too far off the podium in P4 as the leading quartet were split by 8.5 seconds, with Tony Arbolino (Rivacold Snipers Team) completing the top five in the first-ever Moto3™ Virtual Grand Prix race.

That battle for fifth between Arbolino, Lopez and Niccolo Antonelli (SIC58 Squadra Corse) was intense, and drama hit them on Lap 7 as the latter duo cleaned each other out at Turn 11, allowing Arbolino to cruise through to P5.