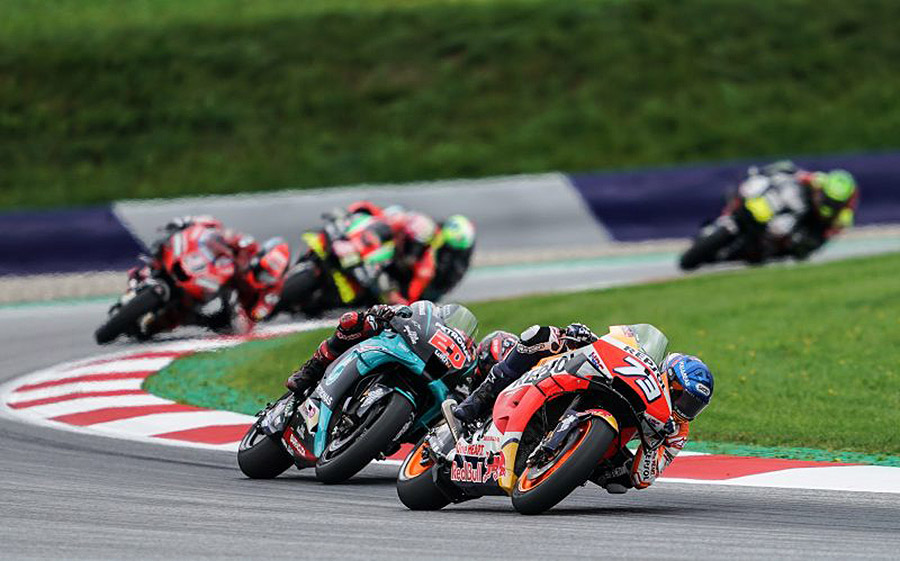 The red flag was again brought out in Austria, Alex Marquez taking away more valuable lessons from his debut MotoGP season.

With it announced that Marc Marquez will focus on recovering from his injuries, the Repsol Honda Team remained focused on the task at hand as race day preparations began at the Red Bull Ring. Eyes were again on the sky, but it all remained dry for the Styrian Grand Prix despite threatening clouds.

A red flag during the race meant that Alex Marquez’s strong start was only rewarded with a 13th place grid position. On the restart, Alex was aggressive off the line and found himself in 11th.From his strong start, the rookie found himself battling with a number of experienced riders around him and holding on to 16th at the finish. This is the first time in his debut season that Alex has failed to score but he did continue his perfect finishing record.

Stefan Bradl was able to benefit from the race restart. In the first half of the race, the German rider got unlucky in the opening laps and was shuffled back. He was able to lap consistently at his own pace but the restart gave him the opportunity to follow Cal Crutchlow and Alex Marquez more closely. Bradl took the flag in 18th.

Takaaki Nakagami was another rider to suffer in the restart, the LCR Honda Team rider having comfortably battled up inside the top three during the opening leg of the race. But the second start proved more difficult and Nakagami was forced to settle for seventh.

After an intense triple-header, the Repsol Honda Team will now enjoy some well-earned time off before the Gran Premio di San Marino e della Riviera di Rimini on September 11.

Alex Marquez
16TH
“I was able to learn a lot today, even if the result isn’t our best. I followed a lot of the experienced riders and I was able to learn a lot from them. I want to wish Maverick all the best, it looks like he is OK, but it was a really scary crash to be behind. I see a lot of positives in this race, the feeling was better and we’re now at a point to improve some specific details. I need to keep refining my riding style and this is the target for Misano. It’s been an intense three weeks so it will be important to recharge now.”

Stefan Bradl
18TH
“To not ride for six months and then come in and do three races in a row is very tough, but we have done it and we have learned a lot from it. In the first half of the race I didn’t make the best start and I lost some positions in the opening corners. In the second part of the race I was able to make a better start and I felt better with the bike, my pace was not too bad, and I was able to close the gap to Alex and Cal. We’ve made a step.”