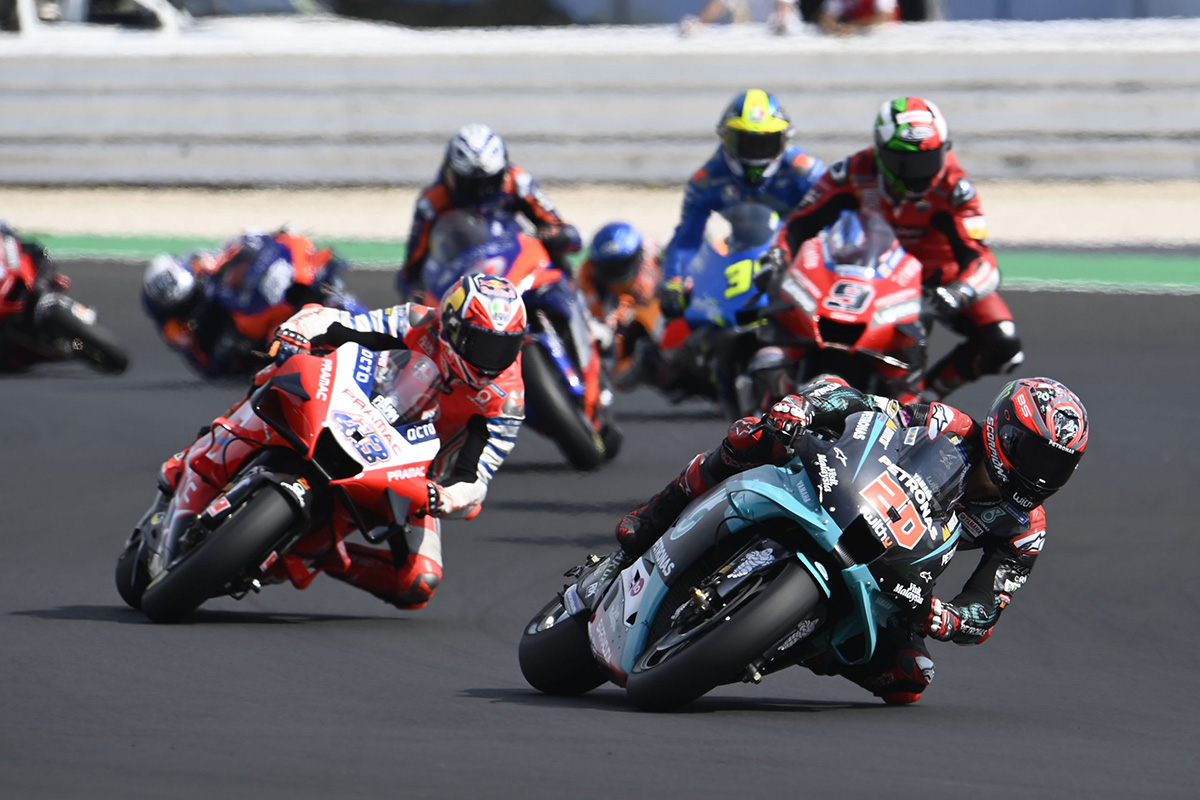 Despite battling hard for the final podium position at the Emilia Romagna GP, PETRONAS Yamaha SRT’s Fabio Quartararo was handed a penalty for exceeding track limits, which dropped him to fourth. Team-mate Franco Morbidelli heroically battled illness to finish ninth.

Quartararo made a good start to the MotoGP race, maintaining his third position off the line. With those around on the soft tyre, the Frenchman dropped to fourth and bided his time until the hard tyre was at its optimum before mounting his attack. With two laps to go, Fabio moved into third, but was handed a long lap penalty for exceeding track limits too many times. With no time to take to the long lap loop he was given a three second penalty, which demoted him to fourth. Quartararo does close the gap to the lead in the championship standings to only one point.

Team-mate Morbidelli, who continued to feel the effects of his stomach bug, put in an heroic effort across the 27 laps. The Italian was caught up in another rider’s Turn 8 crash on the first lap, which dropped him down to 19th. Refusing to give up, Franco powered through to bring his Yamaha YZR-M1 home in ninth; scoring seven points, moving to fifth in the championship and helping PETRONAS Yamaha SRT to stay top of the teams’ standings.

Quartararo and Morbidelli will now turn their attention to the Gran Premi de Catalunya, which takes place at Circuit de Barcelona-Catalunya next weekend (25-27 September).

Fabio Quartararo
4th (+6.419)
I’m really happy about my race, because it is important to finish in third position after all the weekends that we struggled. I received the long lap penalty, but I didn’t receive any messages about track limit warnings on my dashboard so I was a bit surprised by it. I know I had three times where I went over track limits, but the last two ones I didn’t know where they happened at the time. It is disappointing and frustrating to have this penalty, but I am looking forward to Barcelona. Overall I’m happy with my race because I had a good pace and, although it was difficult for us to overtake, I was fighting until the end to be on the podium. Also the start was much better and I feel like we have improved it a lot. Let’s see what we can do in Barcelona next weekend.

Franco Morbidelli
9th (+15.880)
I’m still trying to recover from my stomach bug, I have been feeling very sick. I have to say thanks to my dietician who has been able to give me the right foods to have enough energy for this race. Over the weekend I have been getting better, but I will go home and get checked just to see if there is something to aid recovery further. I hope to be at 100% in Barcelona. Despite this, I think we had the chance to be on the podium this weekend, but unfortunately another rider on the first lap took me out. I lost a lot of time there and I had a small issue with the bike, but I was able to make a good recovery. I’m happy though as I wasn’t expecting to finish ninth, so thanks to the team as well because they have done an unbelievable job with very little input from me this weekend. We now aim to arrive in Barcelona well prepared and ready to attack.