NOT the MotoGP News, #CatalanGP “Barcelona!!!! You took my breath away…” 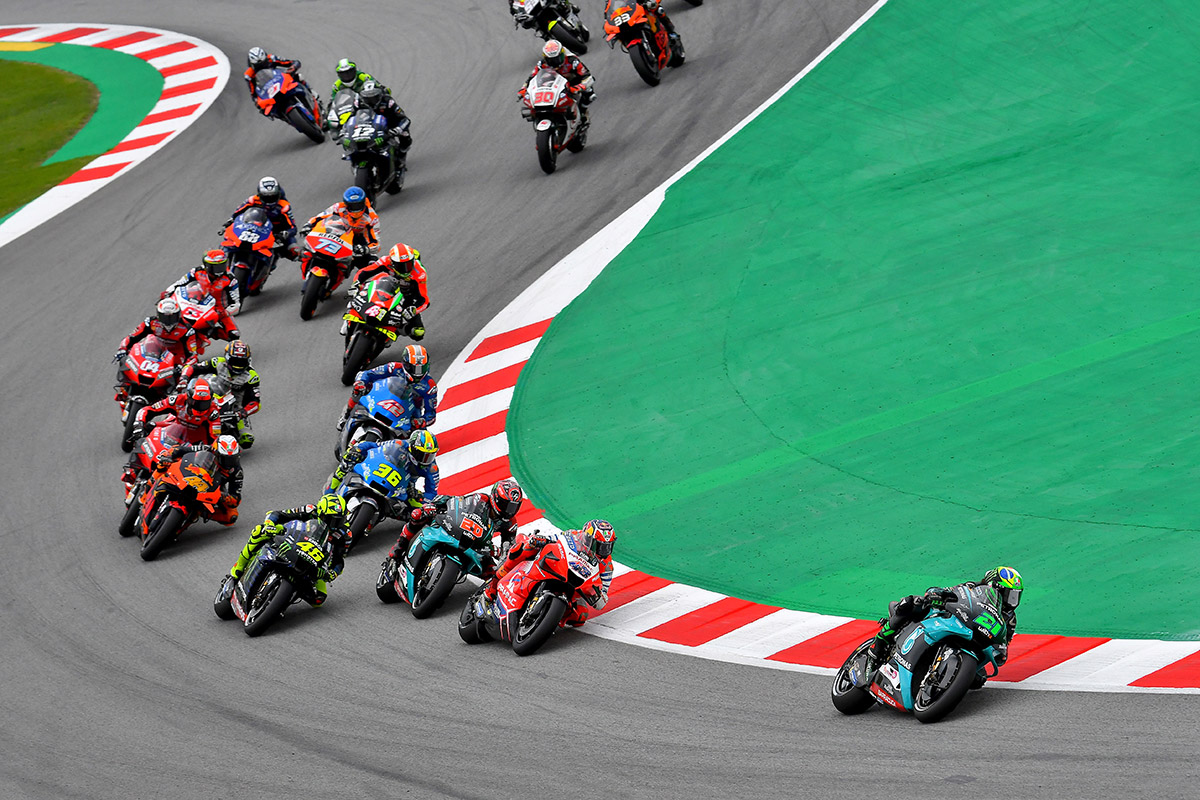 Yep, it’s Barcelona, so a home gig for DORMA. Carmelo gets to go home, back to his built-in bar at Casa Peseta every night, and we get stuck in the bunker, yet again. Oh well… Anyway, Catalunya like every other circuit (other than Misano) this year was empty. But never mind, it’s the racing we need, not the yellow flags or the orange ones either. Well they’re not going to be at any circuit for a while eh Alberto?

Moto3 Tony Arbolino had pole with Fernandez and Rodrigo filling the remaining front row places. Title challenger and Rising Sun hopeful, Ogura, was for some mad reason, down in 24th place. But no for long! Banzai; on the first lap he was 14th. Ominously Darryn Binder was 5th… then 4th. This wasn’t in the script! Bert Arenas took the lead on the second lap, but all this would change. It always does in Moto3. How right we’d be eh?

Saltire McPhee was up to second place by lap 4 but Ogura was down to 17th. But he was still in the leading group of over 20 bikes.

And then… Lap 6, turn 4 McPhee had to slow to avoid Arbolino whilst diving up the inside like a mad wee haggis on the run on Burns night, lost the front, and took Arenas off. And boy, Bert wasn’t happy. Then again, who would be? Championship leader wiped out in the gravel with a very embarrassed McPhee nearby in the gravel too. Oooops. You could see the anger right through Bert’s visor, and embarrassment under John’s. The only redeeming fact (for the Scot) was that Ogura was still outside the top 15. Garcia and Oncu went down at turn 4, 3 laps later. Something about turn 4 isn’t there?

By lap 14 the race had calmed down and (we can’t believe we’re typing this) gone a bit flat. So, to spice it up a bit, 3 laps later, Alcoba copped an LLP. And because he ignored it, Race Direction doubled it to 2 LLPs. Brilliant. This is the kind of wanton stupidity we like; give yourself a 6 second penalty, why not?

On the last lap Binder took the lead at turn 5; that mullet is magnificent and rightly took the win on behalf of Darryn. He’s been at the front end all race pretty much for once. No fighting all the way up from the 5th or 6th row and for once had the tyres left to fight for the win. At last. And those teeth too; to be honest it’s the only thing in looks he shares with his brother, but now they’ve both broken their race ducks.

Next up Moto2, just like night follows day. Anywho, Marini on pole shot off like the proverbial stabbed rat. No surprise. What was surprising was Dixon past Basti into 4th. And Lowes passed his nemesis Bez, whilst hitting fastest times each lap. Anonymous Nicola Bulega retired from the race and possibly from his career. Long hair and catwalk looks count for nothing sometimes (kettle, pot and black? – Ed). Poor Jake Dixon then suffered the curse of some cruel twist of fate; his throttle cable snapped. You make think ride-by-wire is too complex, but a 3mm cable snapping? His best race in Moto2 and we’re choking on humble pie.

As is usual with Moto2 everything just got too stretched apart (insert your own grid girl/racer-chaser joke here) and our collective attention started to wander. Poor old Vierge had a massive off at Turn 9 and Roberts the dreamboat slipped up to 4th. Covid-recovering Jorge Martin retired on lap 15. And all the time Lowes was setting a pace capable of catching and eventually passing Marini. Luca wasn’t going to let a win slip past him and fought back. Great! Excitement at last! And verily a good old battle thus ensued. Phew! It wasn’t to last; use your rear tyre catching and passing and it’s not often going to last especially when you’re fighting for the lead. Marini took the win from Lowes and last year’s oft-mentioned fast man, Baldasari, fell on the last lap at the last corner. Sums up his season so far.

Well MotoGP certainly tried its hardest to keep the excitement quota up. Zarco and Dovi were off at the very first corner whilst Viñales engaged reverse and slid down the field quicker than Brad Smith ever could.

Frankly took and held a massive lead and some bloke called Rossi was in second and looking for his 200th podium. Ned Kelly was doing things on a Ducati that no one else could and was in fourth.

By lap 6, Quat passed Vale in a manoeuvre that years ago was stock in trade for Rossi – perfect. Two laps later, Quat did it again and slid past Frankly into the lead. On lap 14, Frankly ran too hot into Turn 1 and Rossi re-took 2nd. Blimey! Wasn’t to last though; on lap 16 Rossi’s min d rolled back the years all too early, got excited at the prospect of a win and slid off at turn 2. Meanwhile Mir was lifting his skirt hem and hustling as his Suzuki used its tyres better than anyone else apart from his teammate. He passed Miller on lap 16 and then passed Frankly 3 laps later for second. Rins “The Decorator” was also making hay whilst the sun shone; he passed Miller and then Frankly for third. So, two Suzukis on the podium; Quat on the top step, but Mir and Rins filling 2nd and 3rd. Brilliant.

* Yep Barcelona – the one by Freddie Mercury and Montserrat Caballé