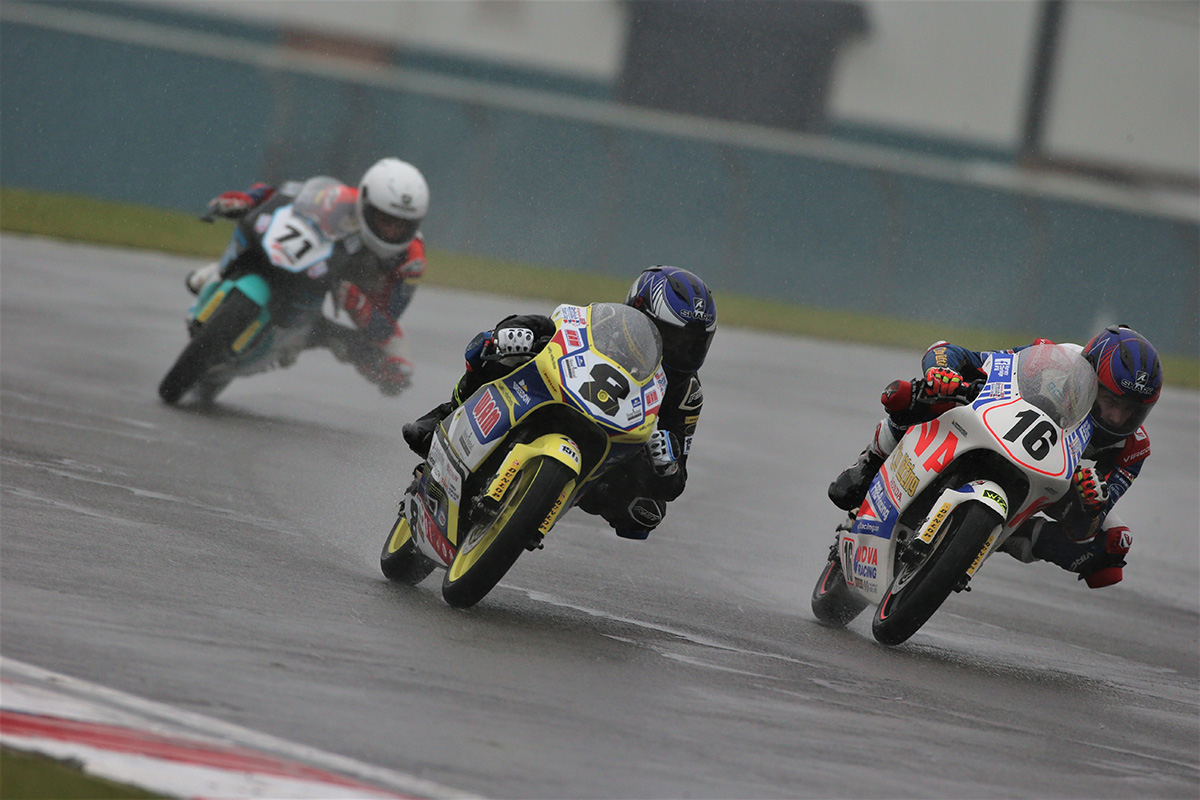 Harvey Claridge (City Lifting/SP125 Racing) is a Honda British Talent Cup race winner! The number 16 pitched it to perfection in a shortened 12-lap sprint at a very wet Donington Park to deny Eddie O’Shea (WAM), out-dragging the number 8 out the final corner to cut his gap to the top. O’Shea extended his overall lead though, with Charlie Farrer (Victoria House Academy/Mortimer Racing) completing the podium and Franco Bourne (Franco Bourne Racing/SP125) down in fifth.

It was Casey O’Gorman (Microlise Cresswell Racing) who took the holeshot with yet another lightning start despite the conditions, with Bourne initially slotting into second before getting shuffled back in Turn 1. That soon happened to O’Gorman too, with Farrer, O’Shea and Claridge swamping past and starting to break away at the front.

That they did, more than 15 seconds down the road by half distance in an impressive show of form as O’Gorman and Bourne found themselves in their own duel for fourth. O’Shea was the man out front for much of the race though, with Claridge dispatching Farrer and tapping the back of his seat to say ‘I’ve got the pace to stay with him’. He had, and the number 16 clawed O’Shea back, with Farrer just about able to stay with them.

The race was more a duel at the front, however, with O’Shea setting the pace but Claridge able to shadow him, eventually striking with three to go. O’Shea wouldn’t be broken, however, and the number 8 hit back to take over in the lead, with Claridge’s long sweeping lines around Donington once again put to work in staying with him. Over the line for the penultimate lap, the two were absolutely locked together – with Farrer still just about in touch.

That’s how it remained, and over the line for the last lap, it was O’Shea ahead but Claridge looming large, looking for a way through but patient enough. O’Shea held firm, stalked as the tarmac counted down to the final two corners, before Claridge then attacked at the Melbourne loop. He was forced to back out of it as O’Shea held on and the two came incredibly close to contact, but the number 16 got the drive out towards Goddards and it all came down to the final corner. Claridge kept it pinned round the outside as the two swept through Goddards neck and neck, everything coming down to a drag to the line – and Claridge coming out on top. It was only a tenth, but a crucial tenth to decide which of the two took their first win of the year.

That’s a good way for Claridge to bounce back from a difficult race last time out, and it puts him right back in contention at the top of the standings, just 16 points – fittingly – back on O’Shea. O’Shea will be gunning to hit back in Race 2 as he just missed out once again, but he did extend his lead as he finished ahead of his closest challengers before the race. Farrer being one of them, as the number 71 lost four points of ground in the standings, crossing the line in third place behind O’Shea.

O’Gorman took fourth place to make it his first finish that hasn’t been a win, but the number 72 kept a solid advantage ahead of Bourne, who took fifth after not quite proving able to overhaul the Microlise Cresswell Racing rider.