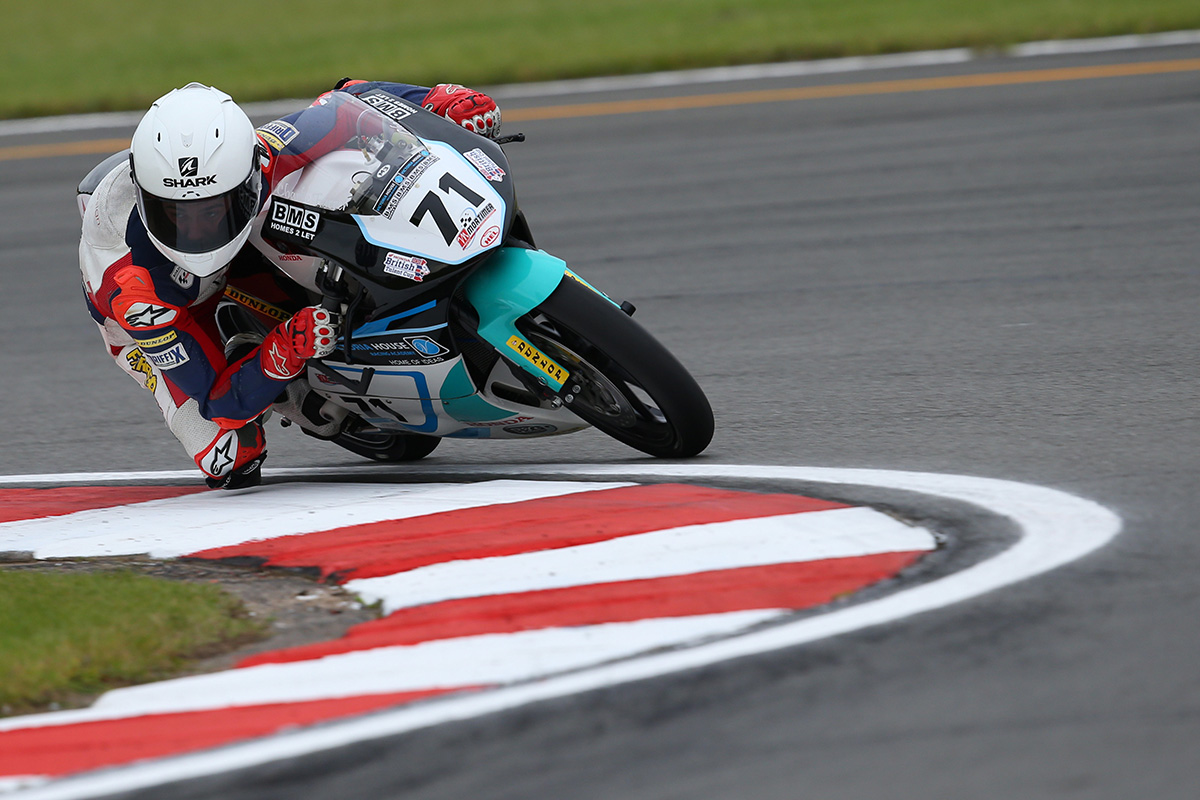 Charlie Farrer (Victoria House Racing Academy / Mortimer Racing) took his second win of the year at Race 2 of Round 4 at Donington Park, battling his way to the front of a five-rider group to take the spoils in style. That cuts his gap to the top as Evan Belford (City Lifting by RS Racing) took second – also his first podium – with Casey O’Gorman (Microlise Cresswell Racing) completing the rostrum finishes. Race 1 winner Harvey Claridge (City Lifting / SP125 Racing) crashed out early on from the lead, putting a dent in his title chances.

When the lights went out it was Claridge who escaped in the lead, getting the hammer down immediately to make a gap on Lap 1. Eddie O’Shea (WAM) and Farrer on the chase initially, but O’Gorman cut his way through to second not long after and was also able to make some breathing space as he shot off in pursuit of Claridge. That left a squabble for third between Farrer, Belford, O’Shea and Franco Bourne (Franco Bourne Racing / SP125 Racing).

Drama then suddenly hit though, as Claridge slid out of his sizeable lead and went down – rider ok – leaving O’Gorman ahead in some clear air and the squabble behind promoted to a squabble for second. All contenders for the Cup bar Belford, the number 52 was the man with a little less to lose and he went toe-to-toe with O’Shea. Farrer, meanwhile, was able to break away and was on the hunt behind O’Gorman…

It didn’t take long for the number 71 to home in, looking for an attack and then bailing out slightly – and that allowing O’Shea through into second. O’Shea sliced through for the lead, Farrer followed, and Farrer then took over before the Foggy esses on Lap 5. It was far from over though, with another seven laps of perfectly pitched mayhem seeing the top five fight it out in a huge group battle at the front.

Coming up to the penultimate lap there was also traffic to contend with, as O’Shea, Belford and O’Gorman managed to pull a slight gap on Farrer and Bourne. Again, though, it seemed the blink of an eye before Farrer was back in the mix and looking for a way through for third. Onto the final lap, it was O’Gorman just ahead as O’Shea attacking Belford sent the two wide and the number 72 swept through, but would it be enough?

Farrer was the man on the move, slicing through for second and then taking the lead down the hill into the esses. Could he hold it? Belford tried an attack but the number 71 kept it pinned to sweep round the outside, staying just ahead as the gaggle of riders blasted towards the line. Farrer was able to keep it, taking his second win of the season and cutting the gap to the top as his 25 point-haul gave the title fight another twist. Belford impressed throughout to take his first podium in second, just a couple of tenths off, with O’Gorman forced to settle for third.

Eddie O’Shea was off the podium for the first time since Round 1 as he took was fourth, and although he keeps his lead in the standings, it’s now down to only four points ahead of Farrer. Franco Bourne completed the top five and the number 17 is now 15 points off the top.

Corey Tinker (Stauff Fluid Power Academy) had a somewhat solitary but nevertheless impressive ride to sixth as he crossed the line well ahead of the rest following the top five home, with a good margin in hand over Ryan Hitchcock (Wilson Racing), another who had a solitary but solid ride as he took seventh.

That’s it from Donington, and the final countdown is well and truly on. O’Shea heads into the season finale four points clear of Farrer, 15 clear of Bourne, 27 ahead of O’Gorman and 29 ahead of Claridge. The top five are the only riders left in with a mathematical shot at the Cup, and everything will be decided in two weeks as the Honda British Talent Cup take on the classic Brands Hatch.