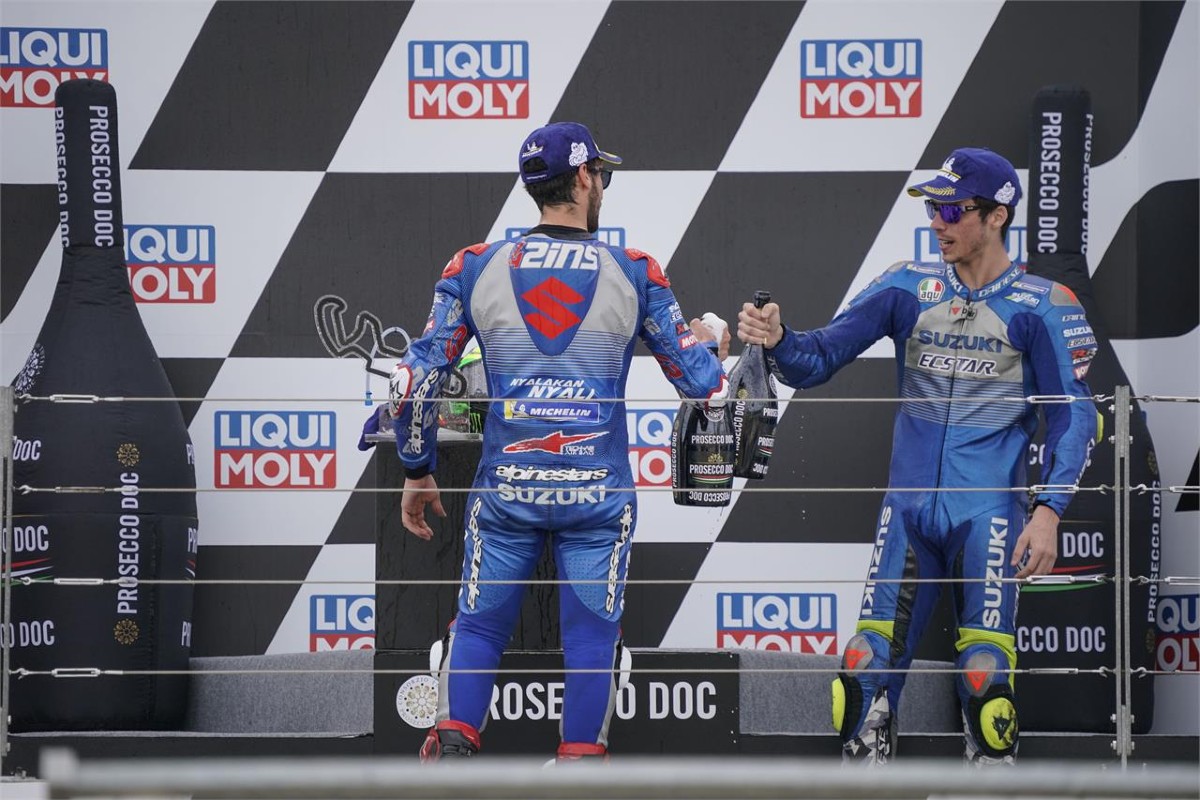 Back under the lights for the second race in as many weeks at MotorLand Aragon, Team Suzuki Ecstar’s riders felt confident with their GSX-RRs heading into the 23 lap race from their grid positions of third and 12th.

Alex Rins got a decent launch off the line and he protected his position into the first corner, ready to go on the attack. Part way round the first lap he was already in second place, and by the fourth lap he had set the fastest lap of the race. He was feeling comfortable and quick with the soft-soft tyre combination and he set about chasing down race leader, Morbidelli. Rins began to lose a bit of ground from lap 18 onwards, and despite setting consistently quick lap times, he decided the better option was to focus on taking his second podium in two weeks with an excellent second place, and close his gap at the top of the standings to 32 points.

Joan Mir did well to get himself into sixth on the first lap from his 12th place slot on the grid, and he swiftly moved into fifth. He then set his sights on closing those in front of him. He executed a super pass at Turn 12 to get into fourth and from there he didn’t look back. On Lap 11 he fought his way onto the podium, where he proceeded to build a protective gap between himself and the chasing rivals. With five laps to go, and clear air either side of him, Mir decided to hold his position and take a crucial third place finish. This great result gives him a 14 point lead in the championship, and also marks his sixth podium in eight races.

“Obviously I was hoping to win again today, but another podium is an awesome feeling anyway. It was really hard to do battle with Franco today, he was very strong and he got a good start. I was happy with my tyre choice but I did feel a little bit of drop part way through the race, I knew that I had a decent gap on Joan so I kept things smooth and went for second place. I was really happy to see Joan there in third because it means another great day for Suzuki with both of us on the podium again! Joan is so consistent, but I’m also feeling better every race so let’s see what can happen in the next few races. Anyway, I’m really pleased to be on the podium again at MotorLand!”

“My feeling was good today, but on the last laps today I wasn’t able to make up the difference – I had the same speed as Alex and Franco but I couldn’t manage to go quicker to close the gap. That was a bit of a shame, but it’s always hard to start further back on the grid and I lost some time while overtaking other riders. But anyway, I’m glad to have been able to collect points today and I’m satisfied because my target was the podium; I knew that was needed to keep a hold on the championship lead, so I’m happy that I achieved that. I will be giving my best in the next three races.”

#AlcanizGP
Follow on Social Media
Get the VROOM Podcast