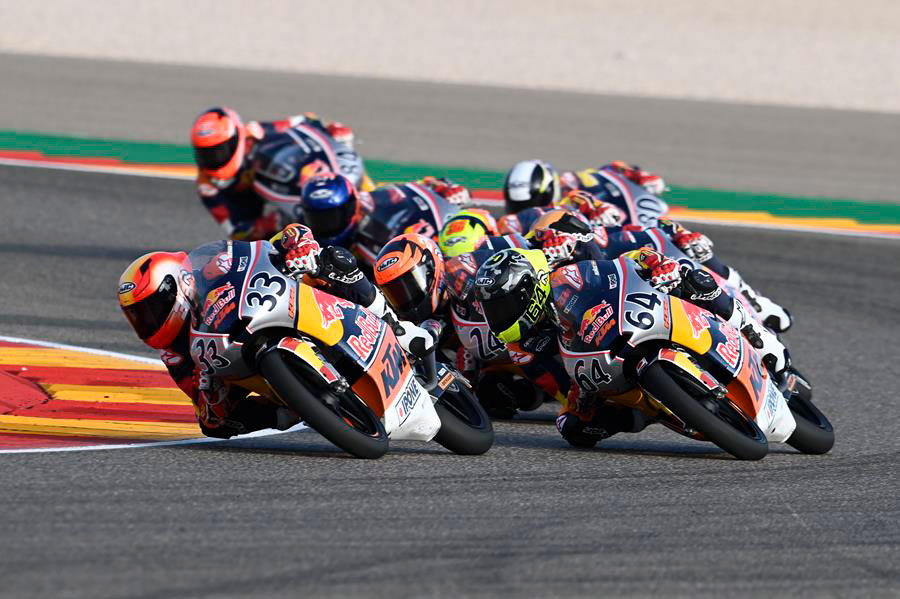 Though the first half of the season saw Pedro Acosta become the first Rookie to lock out 6 victories in a row, the 16-year-old Spaniard was pushed off the track in the last race and didn’t score.

As Acosta said, “I tried to break away but I think the others have learnt what they need to do to stay with me and I couldn’t manage it this weekend.”

The others have learnt to take the KTM RC 250 R battle to him but Acosta is still very much the Cup favourite. He has a 46 point advantage over Colombian 14-year-old David Alonso who is himself 10 ahead of Iván Ortolá, the 16-year-old Spaniard, but there are still 100 points to be won.

The chasing pair particularly have hit form, both scoring their maiden Rookies Cup victories in Aragón 2. Another 4 riders also have a mathematical chance of taking the title.

While the Cup chase races to it’s conclusion, ex Rookies battle for the World Championships in all three Grand Prix classes. Joan Mir leads the MotoGP points, Enea Bastianini is a close second in Moto2 and after double victories in Aragón, Jaume Masiá has improved his Moto3 chances hugely but it is still Ai Ogura who is the closest to the leader, 2nd in the points table.

At the same time the next generation line up for their chance. Applications are now closed for the 2021 Cup and a fabulous group of the world’s fastest teens have put themselves on the Rookies Radar. Riders from India and Italy, Brazil and Barbados, Argentina and Australia. We have already had riders from 35 different nations in the Red Bull MotoGP Rookies Cup, that could increase going into 2021, the 15th Cup season.

This weekend’s Rookies Cup races can be seen live on www.redbull.tv and on TV stations around the world.