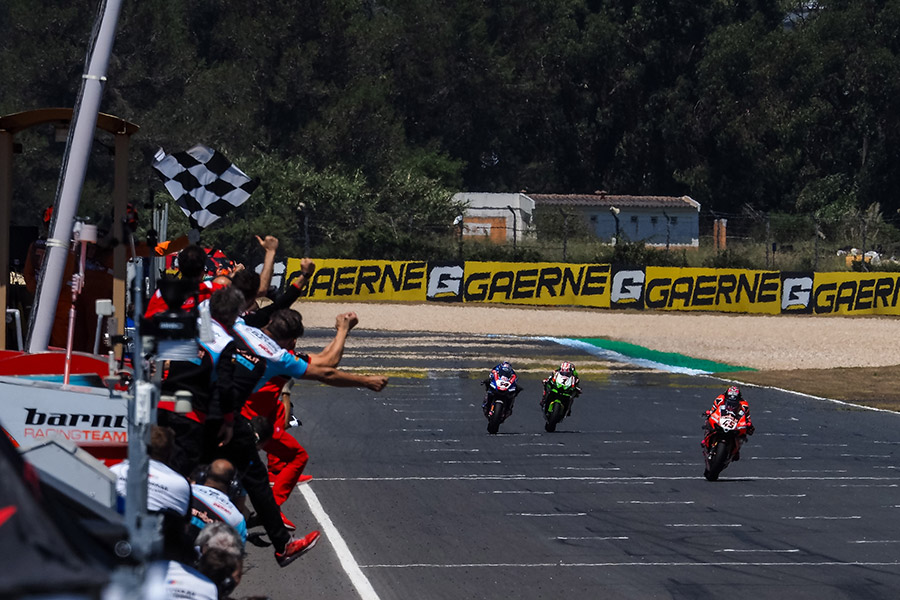 The first race of the Gaerne Estoril Round proved to be a thrilling spectacle that ebbed and flowed throughout between the leading trio at the Circuito Estoril as Scott Redding (Aruba.it Racing – Ducati) claimed his second MOTUL FIM Superbike World Championship win of the season with the top three separated by less than one second.

Redding and Jonathan Rea (Kawasaki Racing Team WorldSBK) both got a good start but it was the Ducati of Redding who got the jump on Rea on the opening lap before Toprak Razgatlioglu (Pata Yamaha with BRIXX WorldSBK) was able to jump Rea into second place. As Redding and Razgatlioglu broke away at the end of the opening lap, Michael Ruben Rinaldi (Aruba.it Racing – Ducati) was able to fight with Rea to pass him on Lap 2, although Rea responded the following lap to move back into the podium places. The trio battled it out throughout the race, with Rea on the SC0 tyre and both Redding and Razgatlioglu on the SCX tyre.

Lucas Mahias (Kawasaki Puccetti Racing) got a good start on his SC0 tyres, one of only six riders to start on that tyre, to move from seventh into fifth on the opening lap before moving down the order as riders who had lost positions through Superpole times being deleted made progress; Mahias would eventually finish in 13th place.

Although the battle for the lead settled down in the middle stages of the race, Rea’s SC0 tyre appeared to hold on more throughout the 21-lap race as he put pressure on Razgatlioglu in the latter stages. Rea was able to get a run on Razgatlioglu on the start and finish straight, although the Turkish star was able to keep the position on the brakes into the right-hander of Turn 1.

It means Redding claimed his first back-to-back wins following his Race 2 victory at the Aragon Round last time out, while Rea stepped onto the podium for the 189th time in his WorldSBK career; while it’s Kawasaki’s first podium at Estoril since 1993.

Garrett Gerloff (GRT Yamaha WorldSBK Team) finished fourth after fighting back through the field after losing out at the start, including a battle with Rinaldi in fifth; Gerloff passing the Italian rider in the latter stages of the race to claim a top-four finish. Rinaldi was unable to keep his pace going throughout the race and dropped four seconds to Gerloff at the end of the race but was able to finish ahead of Chaz Davies (Team GoEleven) in sixth.

Axel Bassani (Motocorsa Racing), the youngest rider on the grid, was another rider who had a Superpole time deleted but the Italian rider was able to come home in 11th place and take home his best WorldSBK result to date, five seconds clear of Leon Haslam (Team HRC). Mahias finished in 13th place with Tom Sykes (BMW Motorrad WorldSBK Team) in 14th despite the British rider moving up the order in the early stages before falling back down. Kohta Nozane (GRT Yamaha WorldSBK Team) claimed the final point available in Race 1 with 15th place, finishing one second clear of Jonas Folger (Bonovo MGM Action).

Isaac Viñales (Orelac Racing VerdNatura) came home in 17th place on his first visit to Estoril on WorldSBK machinery, while Eugene Laverty (RC Squadra Corse), who had made progress from 13th on the grid to run in the top seven lost the front of his BMW M 1000 RR at Turn 4 when battling with van der Mark, forcing the Irishman to tumble down the order although he was able to rejoin the race. At around the same time on Lap 9, another rider who was making up ground, Alex Lowes (Kawasaki Racing Team WorldSBK) crashed at Turn 7 as he also lost time after fighting from tenth. Like Laverty, he was able to rejoin the race to finish ahead of Loris Cresson (TPR Team Pedercini Racing).

Samuele Cavalieri (TPR Team Pedercini Racing) was one of two retirements in the race following a crash at Turn 7, while Christophe Ponsson (Alstare Yamaha) was the second retirement of the race.

The FIM Supersport World Championship’s racing started at the Gaerne Estoril Round in thrilling fashion as five riders battled it out for victory with just 1.023s covering the top five riders at the Circuito Estoril as Steven Odendaal (Evan Bros. WorldSSP Yamaha Team) secured his third win of 2021 after a stunning battle at the front of the field.

South African rider Odendaal got the jump on polesitter Federico Caricasulo (GMT94 Yamaha) at the start and immediately looked to build a gap ahead of the Italian who claimed his first pole position since returning to WorldSSP. Caricasulo was unable to hold on to second place as the race moved onto Lap 2 as Philipp Oettl (Kawasaki Puccetti Racing) jumped the Italian at Turn 1 and started to close in on Odendaal.

Caricasulo was the first rider to have an incident when under pressure from teammate Jules Cluzel (GMT94 Yamaha) with the Italian losing the front of his Yamaha machine at Turn 4; promoting Cluzel into third place while Caricasulo tumbled down the order although he was able to rejoin the race.

Dominique Aegerter (Ten Kate Racing Yamaha) and Manuel Gonzalez (Yamaha ParkinGo Team) also joined the lead battle with less than a second separating the top five on Lap 10 of the 18-lap race. As the race headed on to Lap 14, Cluzel and Aegerter battled it out for third place with Swiss rider Aegerter making the move at Turn 1 on Cluzel before the Frenchman responded on the same lap at Turn 4.

Oettl had kept the lead until Lap 16 when Odendaal made his move, taking advantage of extra pace heading into Turn 6 as the South African rider took the lead before Oettl responded at Turns 1 and 2 on Lap 17 to re-gain the lead of the race, but as the race entered the last lap, Odendaal and Aegerter made their move at Turn 1 although Cluzel moved back on Aegerter; the pair going on a drag race until the line with Cluzel claiming third by just 0.015s, behind Odendaal and Oettl. Gonzalez equalled his best result in WorldSSP with fifth place as he held on to the lead group throughout the race.

Italian Raffaele De Rosa (Orelac Racing VerdNatura) responded from a bad start to move into sixth place but was unable to take advantage of the battling ahead of him to latch onto the lead group, while Luca Bernardi (CM Racing) secured another top ten finish with seventh place. Estonian Hannes Soomer (Kallio Racing) claimed eighth place with 2019 Champion Randy Krummenacher (EAB Racing Team) in ninth place.

Christoffer Bergman (Wojcik Racing Team), who had shown strong pace in the early stages of the Estoril Round, finished in tenth place with Niki Tuuli (MV Agusta Corse Clienti) in 11th despite starting the race in the pit lane following the crash with Cluzel at the Aragon Round. Caricasulo responded from his crash to claim 12th place, ahead of Marc Alcoba (Yamaha MS Racing), Stephane Frossard (Moto Team Jura Vitesse) and Davide Pizzoli (VFT Racing) completing the points; the latter being penalized by one position for track limits infringements while defending from Frossard. Swiss rider Frossard was the highest place WorldSSP Challenge competitor.

#EstorilWorldSBK
Follow on Social Media
Get the VROOM Podcast