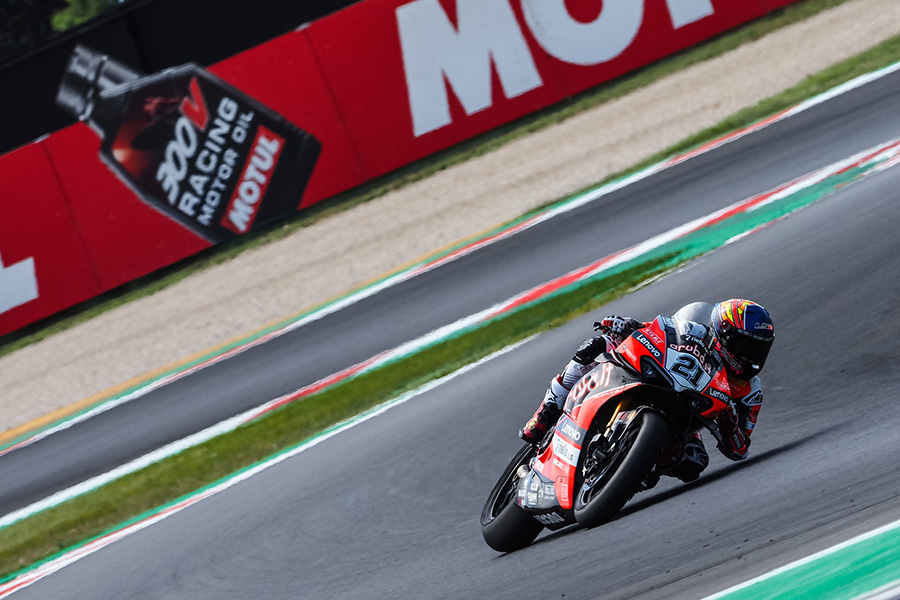 Friday action in the MOTUL FIM Superbike World Championship continued into the afternoon at the Misano World Circuit “Marco Simoncelli” and it was home hero Michael Ruben Rinaldi (Aruba.it Racing – Ducati) who topped the timesheets as he took to the Italian venue for the first time in WorldSBK on factory Ducati machinery for the Pirelli Made in Italy Emilia-Romagna Round.

Rinaldi had been the long-time leader in Free Practice 1 before a late lap meant he was usurped by Turkish sensation Toprak Razgatlioglu (Pata Yamaha with BRIXX WorldSBK) in the closing stages, but Rinaldi was able to respond in the afternoon session to post a time of 1’34.334s, three tenths clear of Alex Lowes (Kawasaki Racing Team WorldSBK), who put in a strong lap towards the end of Free Practice 2.

Jonathan Rea (Kawasaki Racing Team WorldSBK) and Razgatlioglu both posted a 1’34.848s across the day, with Razgatlioglu setting that time to top Free Practice 1 session, while Rea found almost a second between the two sessions; Rea losing some track time in the opening session. Razgatlioglu was classified in third place with Rea in fourth although the Turkish rider did suffer a technical problem as Free Practice 2 came to an end.

American star Garrett Gerloff (GRT Yamaha WorldSBK Team) claimed fifth place in the combined classification after posting the third-best time in Free Practice 1, with Scott Redding (Aruba.it Racing – Ducati) in sixth; Redding missing out on track time in Free Practice 1 after a technical issue, while he was also sanctioned for not immediately stopping his bike following that issue with a suspension from the first 20 minutes of Free Practice 2.

Alvaro Bautista (Team HRC) had a strong afternoon session to claim seventh place after Friday’s action, although the Spanish rider did crash his Honda machine at Turn 4 but was able to re-mount the bike once the session had ended. Tom Sykes (BMW Motorrad WorldSBK Team) was in eighth place after bouncing back from a challenging morning while Axel Bassani (Motocorsa Racing) and Leon Haslam (Team HRC) completed the top ten.

Lucas Mahias (Kawasaki Puccetti Racing), sporting a striking livery with his Puccetti Kawasaki bike, had a crash in the final corner that cost him plenty of track time with over half an hour to go in the session; Mahias had shown strong pace in the early stages of Free Practice 2 which enabled him to finish 11th overall on Friday.

Chaz Davies (Team GoEleven) was 12th as he goes in search of his 100th WorldSBK podium this weekend; the British rider crashed but re-mounting his Ducati machine at Turn 4 and able to finish ahead of Tito Rabat (Barni Racing Team) with the Spanish rider having a very similar incident almost straight after Davies. BMW runners Michael van der Mark (BMW Motorrad WorldSBK Team) and Eugene Laverty (RC Squadra Corse) completed the top 15.

Jonas Folger (Bonovo MGM Action) made it three BMW riders in a row with 16th place, just ahead of Kohta Nozane (GRT Yamaha WorldSBK Team) and Andrea Locatelli (Pata Yamaha with BRIXX WorldSBK); the Italian trying to use Razgatlioglu as a reference point in the second session.

Spanish rider Manuel Gonzalez continued his impressive Misano pace in Free Practice 2 by topping both FP2 and the combined timesheets
Friday action for the FIM Supersport World Championship came to a conclusion at the Misano World Circuit “Marco Simoncelli” with Manuel Gonzalez (Yamaha ParkinGo Team) continuing where he left off from this morning’s action with the fastest time ahead of the Pirelli Made in Italy Emilia-Romagna Round.

Gonzalez set the pace on Friday morning and improved his time yet again to post a 1’38.473s in the afternoon Free Practice 2 session, topping the timesheets from three-time 2021 race winner Steven Odendaal (Evan Bros. Yamaha WorldSSP Team) as the South African rider looks to get back to winning ways following his retirement from Race 2 at Estoril. Dominique Aegerter (Ten Kate Racing Yamaha), who won last time out at Estoril, finished the day in third place with just over a tenth behind Gonzalez.

Finnish rider Niki Tuuli (MV Agusta Corse Clienti) claimed fourth spot overall for the day despite a crash at Turn 12 in Free Practice 1 that ended his session early, with wildcard Roberto Mercandelli (Team Rosso e Nero) finishing in fifth place after spending most of Free Practice 2 at the top of the timesheets. Federico Caricasulo (GMT94 Yamaha) claimed sixth place for the day despite a crash in the opening session, with the Italian rider able to continue following the office.

He finished less than a tenth clear of teammate Jules Cluzel while it was another rider making their first appearance of 2021, Filippo Fuligni (D34G Racing), who stole some of the headlines after claiming eighth place for the day and second in the morning session; although his copybook was blighted by two crashes in the afternoon, coming at Turn 14 and then Turn 4. Estonian Hannes Soomer (Kallio Racing) was in ninth place for the day with 2019 Champion Randy Krummenacher (EAB Racing Team) in tenth, although the Swiss rider had shown strong pace throughout the afternoon session.

German Philipp Oettl (Kawasaki Puccetti Racing) had a difficult day on Friday at Misano as he suffered from a crash at the left-hander of Turn 2 in FP1 and he could only manage ninth place in FP2, moving him into 11th in the combined standings. Kevin Manfredi (Altogo Racing Team) was the highest placed WorldSSP Challenge competitor in 12th place with Italian Raffaele De Rosa (Orelac Racing VerdNatura) in 13th; De Rosa having a crash at Turn 8 during FP2.

Can Öncü (Kawasaki Puccetti Racing) claimed 14th place across both sessions while Luca Bernardi (CM Racing), who claimed his and San Marino’s first podium last time out in Estoril, was down in 15th and will hope he can move up the order in front of his home fans across the weekend.

Federico Fuligni (VFT Racing) came home in 16th place while One Event rider Luca Ottaviani (RM Racing) was in 17th; the Italian able to re-join the circuit after an FP1 crash at Turn 14. One of the surprises of 2021, Christoffer Bergman (Wojcik Racing Team), found himself down in 18th place with Massimo Roccoli (Promodriver Organization) and Davide Pizzoli (VFT Racing) completing the top 20.

Pawel Szkopek (Yamaha MS Racing) has been declared unfit for the remainder of the weekend following a crash at Turn 9 in Free Practice 1, with the Polish rider being diagnosed with a fracture to his cuboid bone on his right foot. Finnish rider Vertti Takala (Kallio Racing) came off his bike at Turn 4, as did Szkopek’s teammate, Marc Alcoba.

The Dutchman is the sole KTM rider in the field in 2021 but was able to claim top spot as all three manufacturers featured in the top three
The FIM Supersport 300 World Championship action continued into Friday afternoon with the second practice session for the Pirelli Made in Italy Emilia-Romagna Round at the Misano World Circuit “Marco Simoncelli” with Dutchman Victor Steeman (Freudenberg KTM WorldSSP Team) topping the timesheets after Friday’s two practice sessions.

As usual in WorldSSP300, it was a close-run affair with 19 riders within a second of Steeman’s time after the Dutchman posted a 1’50.088s to go fastest of the 43 riders taking part at Misano. Steeman’s time was just over a tenth clear of Bruno Ieraci (Machado CAME SBK) with the Italian’s session being disrupted toward the end of Free Practice 2 for a technical check on his bike. Adrian Huertas (MTM Kawasaki) was the lead runner for the reigning Teams’ champions with third place, showing strong pace throughout both sessions on Friday.

Tom Booth-Amos (Fusport – RT Motorsports by SKM Kawasaki) had topped the morning session by the barest of margins and continued his strong showing with fourth place in the combined standings, ahead of Huge De Cancellis (Prodina Team WorldSSP300); the two finished first and second in the morning session and fourth and fifth overall. Meikon Kawakami (AD78 Team Brasil by MS Racing) completed the top six after a fourth-place showing in Free Practice 1, six tenths slower than Steeman’s fastest time.

Vincente Perez Selfa (Machado CAME SBK) was in seventh place, a tenth away from Kawakami, with Samuel di Sora (Leader Team Flembbo) in eighth place. Reigning Champion Jeffrey Buis (MTM Kawasaki) was in ninth place with Bahattin Sofuoglu (Biblion Yamaha Motoxracing) in tenth overall, despite losing most of the afternoon’s 30-minute session after he crashed at Turn 16.

#ITAWorldSBK
Follow on Social Media
Get the VROOM Podcast