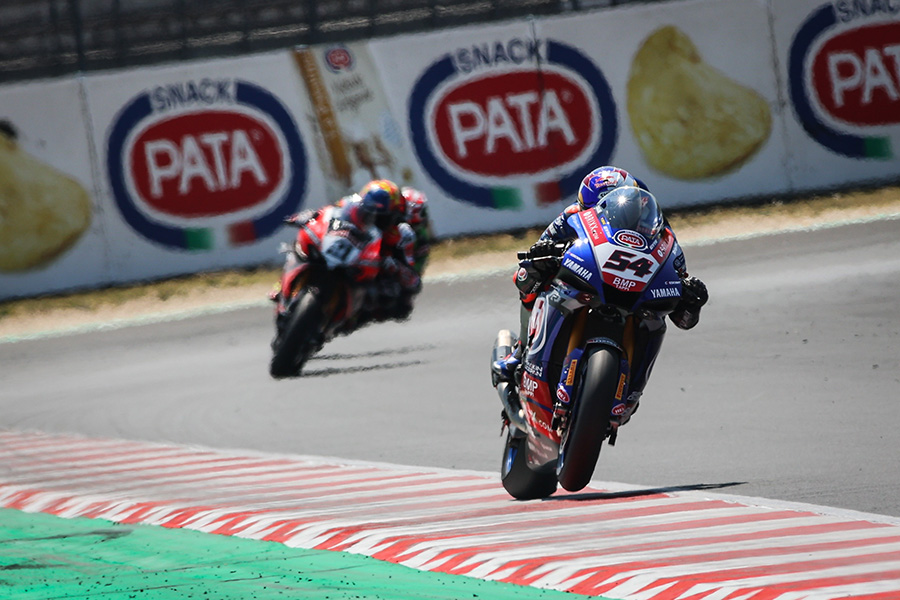 The MOTUL FIM Superbike World Championship action came to a thrilling conclusion in Race 2 for the Pirelli Made in Italy Emilia-Romagna Round as Toprak Razgatlioglu (Pata Yamaha with BRIXX WorldSBK) claimed his first victory of the season at the Misano World Circuit “Marco Simoncelli” as he denied home hero Michael Ruben Rinaldi (Aruba.it Racing – Ducati) a hat-trick of wins on home soil.

The start was a precursor of what was to come throughout the 21-lap race as Jonathan Rea (Kawasaki Racing Team WorldSBK) moved to the front after he took advantage of Razgatlioglu’s aggressive move on Rinaldi on the opening lap, ducking down the inside the pair of them at Turn 4. Rinaldi was able to recover to pass Turkish sensation Razgatlioglu.

Rinaldi was unable to pull a gap out to Razgatlioglu with the Turkish rider keeping the pressure on the two-time race winner in 2021, before Razgatlioglu caught Rinaldi by surprise at Turn 14 on Lap 8 to take the lead, instantly pulling out a gap of around half-a-second before extending that to over a second at the start of Lap 1, with Rea able to put pressure on Rinaldi.

As Razgatlioglu continued out in front, Rea started to apply the pressure to Rinaldi with the Italian able to resist the six-time Champion and, as the laps counted down, Rinaldi started closing the gap to Razgatlioglu at the front as the trio broke away from Scott Redding (Aruba.it Racing – Ducati). The gap closed to around three tenths between the pair of them before Razgatlioglu once again extended the gap to claim his first victory of the season, with Rinaldi coming home in second ahead of Rea; closing the gap at the top of the standings to just 20 points. Razgatlioglu’s victory means Yamaha breaks a streak of 15 wins by Kawasaki or Ducati since Race 1 in 2014.

Redding came home in fourth place, the only time in his WorldSBK career that the British rider has not collected a podium finish, with Redding finishing ahead of Garrett Gerloff (GRT Yamaha WorldSBK Team) after the American recovered from a challenging weekend to claim a top five position after a late-race battle with Alex Lowes (Kawasaki Racing Team WorldSBK), who rounded out the top six.

German rider Jonas Folger (Bonovo MGM Action) finished just outside the points after a wide moment through Turn 4 in the latter stages of the race, but he was able to finish ahead of Isaac Viñales (Orelac Racing VerdNatura), Samuele Cavalieri (TPR Team Pedercini Racing) and teammate Loris Cresson rounding out the classified runners.

Leon Haslam (Team HRC) was the first retirement of the race when he crashed on his Honda machine at Turn 2 in the early stages of Lap 4, while Chaz Davies (Team GoEleven) retired for the third race at Misano with a technical issue.

Race 2 for the FIM Supersport World Championship was a thrilling battle at the Misano World Circuit “Marco Simoncelli” as Dominique Aegerter (Ten Kate Racing Yamaha) claimed his third consecutive victory in a sensational battle for the Pirelli Made in Italy Emilia-Romagna Round.

Jules Cluzel (GMT94 Yamaha) started the race from fourth place but soon found himself in the lead of the race, moving into second place before Turn 1 and then sweeping around the outside of Dominique Aegerter (Ten Kate Racing Yamaha) around the right-hander of Turn 1, with the Frenchman soon trying to pull away from the field.

South African Steven Odendaal (Evan Bros. WorldSSP Yamaha Team) was also making moves and passed both Aegerter and Cluzel in the opening laps of the race as he took the lead of the race as he went in search of win number four of the 2021 season. The trio were separated just three tenths, with Manuel Gonzalez (Yamaha ParkinGo Team) and Luca Bernardi (CM Racing) closing in on the lead group.

Maria Herrera (Biblion Iberica Yamaha Motoxracing) retired from the race after a crash at the right hander of Turn 4 with the Spanish rider taken to the medical centre for a check-up following the incident. The crash resulted in a Red Flag to be displayed due to track conditions at Turn 4. Can Öncü (Kawasaki Puccetti Racing) crashed out at the final corner just as the Red Flags were shown, and the Turkish rider was unable to re-join the restarted race after he did not get his bike back to the pitlane within five minutes of the Red Flag being shown.

Cluzel repeated his start on the restart as he jumped Odendaal into Turn 1 but it was Marco Alcoba (Yamaha MS Racing) who made the most from the second start with the Spanish rider moving up to fifth place. Aegerter and Gonzalez battled it out for fourth place with 2019 WorldSSP300 Champion Gonzalez aiming for his first podium in the class.

The lead group began to expand as Bernardi brought Raffaele De Rosa (Orelac Racing VerdNatura), Philipp Oettl (Kawasaki Puccetti Racing) and Randy Krummenacher (EAB Racing Team) with the top nine separated by just two seconds on Lap 4 of the 12-lap restarted race. Aegerter soon made his move on Alcoba to move himself up the order into fourth place before Sammarinese rider Bernardi, celebrating his home race, followed him through for fifth place as Alcoba fell down to sixth place.

Gonzalez appeared to have a pace advantage of Cluzel and used this to move himself into second place ahead of the Frenchman with an aggressive overtake on Cluzel at Turn 2 on Lap 9 after closing in throughout the eighth place. Odendaal had looked like he would return to winning ways, but a late-race Long Lap Penalty for track limit infringements meant the South African finished fifth. As Odendaal did not have time to take the penalty, it was converted into a three-second time penalty.

It meant Aegerter would claim a third consecutive WorldSSP victory ahead of Sammarinese Bernardi in second for the third consecutive race with Cluzel taking third spot on the podium. Gonzalez had been in position to take advantage of Odendaal’s penalty, but an error meant he fell down to fifth place before being classified in fourth, ahead of Odendaal.

Oettl came home in sixth place after a strong showing from the German rider in Race 2, coming home a quarter-of-a-second ahead of Italian rider Raffaele De Rosa (Orelac Racing VerdNatura) who secured a top seven finish. Despite strong pace in the restarted race, Alcoba fell down the order to finish in eighth, just ahead of Federico Caricasulo (GMT94 Yamaha) and Hannes Soomer (Kallio Racing).

There was a Lap 1 collision during the original start at Turn featuring Filippo Fuligni (D34G Racing), Roberto Mercandelli (Team Rosso e Nero) and Niki Tuuli (MV Agusta Corse Clienti) with all three riders forced to retire on the opening lap of the original race; Tuuli taken to the medical centre for a check-up following the crash. Kevin Manfredi (Altogo Racing Team) and Stephane Frossard (Moto Team Jura Vitesse) also retired after incidents during the first stage of the race; Manfredi retiring with technical problems.

Racing at the Misano World Circuit “Marco Simoncelli” came to a conclusion with a thrilling FIM Supersport 300 World Championship Race 2 which was won by 2018 World Champion Ana Carrasco (Kawasaki Provec WorldSSP300) claiming her first victory in her comeback from injury at the Pirelli Made in Italy Emilia-Romagna Round.

Carrasco claimed the victory after Tom Booth-Amos (Fusport – RT Motorsports by SKM – Kawasaki) made an error at the final corner and crashed out although he was able to re-mount his bike to come home in 17th place. Meikon Kawakami (AD78 Team Brasil by MS Racing) claimed his first ever WorldSSP300 podium with second place ahead of Samuel di Sora (Leader Team Flembbo) in third, his first podium in the class.

Polesitter Bahattin Sofuoglu (Biblion Yamaha Motoxracing) lost out at the start but was able to recover to stay in the lead group throughout the 15-lap race although did not return to the rostrum, coming home in sixth place, with Gabriele Mastroluca (ProGP Racing) in fourth place; the Italian had crossed the line in third but was given a penalty to drop one position follow a last-lap track limits infringement.

Ton Kawakami (AD78 Team Brasil by MS Racing) was running in second race in the early stages when he had a huge moment coming out of the final corner as the Brazilian rider came off his Yamaha machine and across the track, although thankfully the other riders were all able to avoid Kawakami; the Brazilian retiring from the race.

Gaps started to form at the front of the field with Tom Booth-Amos (Fusport – RT Motorsports by SKM – Kawasaki), Hugo De Cancellis (Prodina Team Flembbo), Sofuoglu, Adrian Huertas (MTM Kawasaki) all fighting for victory in the opening half of the race; De Cancellis and Booth-Amos swapping positions regularly with Sofuoglu always near the podium places. Steeman was able to stay with the lead group despite an impressive save from his KTM machine on the exit of Turn 8; Steeman eventually finishing in ninth after a three-second penalty.

Dorren Loureiro (Fusport – RT Motorsport by SKM – Kawasaki) claimed his best finish in WorldSSP300 since 2018 with fifth place, finishing ahead of Sofuoglu in the lead group of six. Reigning Champion Jeffrey Buis (MTM Kawasaki) came home in seventh Oliver König (Movisio by MIE) in eighth. Steeman was ninth with Adrian Huertas (MTM Kawasaki), who had taken the Championship lead on Saturday, finished in tenth.

Bruno Ieraci (Machado CAME SBK) retired from the race after a highside crash at Turn 14, while Marc Garcia (2R Racing) had a technical issue that forced him out of the race. Just after setting the fastest lap of the race, Unai Orradre (Yamaha MS Racing) crashed from a top ten position but was able to re-join, finishing outside the points, while Marco Gaggi (Biblion Yamaha Motoxracing) had a technical issue as well as Vicente Perez Selfa (Machado CAME SBK). Inigo Iglesias (SWM Racing) retired from the race on Lap 9.

Mirko Gennai (Team BRcorse) retired after he crashed at Turn 2 at the start of Lap 13. Hugo de Cancellis (Prodina Team WorldSSP300) had been in the lead group but a crash involving Yuta Okaya (MTM Kawasaki) forced both to retire, with Okaya taken to the medical centre for a check up following the incident. Victor Rodriguez Nuñez (Accolade Smrz Racing) also retired from the race on the final lap.

#ITAWorldSBK
Follow on Social Media
Get the VROOM Podcast