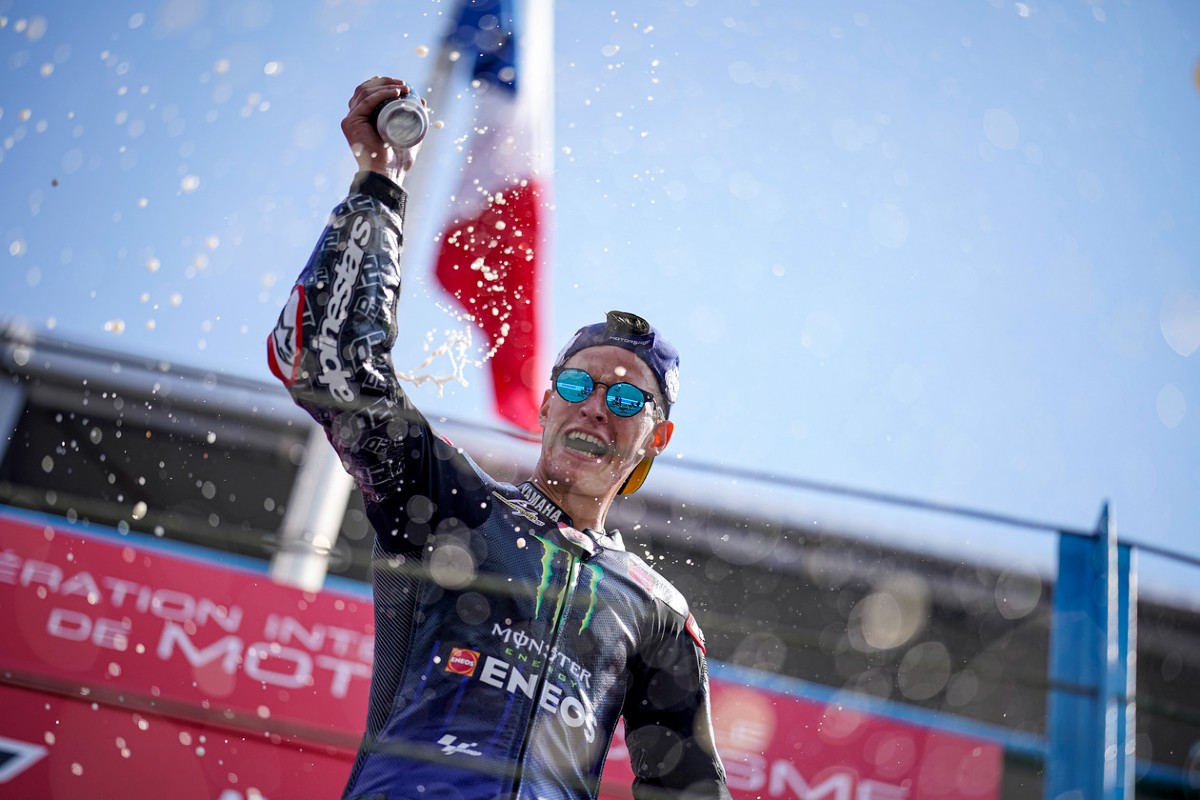 Fabio Quartararo picked the perfect time to push in the Dutch GP to gift Yamaha its fifth victory of the season. Maverick Viñales made it an even more memorable day for the Monster Energy Yamaha MotoGP Team at the TT Circuit Assen. He secured second place, achieving a 1-2 for the Factory Team, its first since the 2017 Argentina GP.

Quartararo had a brilliant start from second to take the holeshot, but he wasn‘t able to break away. After an early tussle with Francesco Bagnaia, the Frenchman completed the opening lap in second. However, he was determined not to let his rival out of his sight. He made moves on lap 3 and lap 5 that didn‘t last, but it was three times the charm. On lap 6 he hit the front and then tried to bolt, setting a 1‘32.897s on lap 7 to create a 0.648s gap.

Having broken away from the pack, the remainder was a lonely ride for El Diablo, but enjoyable all the same. He rode a faultless race to take his fourth win and his sixth podium of the season, with a 2.757s advantage over his teammate in second place.

Viñales had a good launch from pole, but fell back to fifth place in the first corner. The Spaniard completed lap 1 in fourth and had his work cut out for him. He was looking to hang on to the leading trio whilst at the same time defending his position from Johann Zarco.

The number 12 rider was doing a brilliant job, and by lap 14 his hard work paid off. He overtook Takaaki Nakagami, and with Bagnaia being handed a long-lap penalty, Top Gun took over second place on lap 15. With clear track ahead of him, he was able to make the most of his soft front tyre and the nimble M1. He hadn‘t given up yet and set a personal best lap of 1‘33.045s on lap 18, taking a big chunk out of Quartararo‘s lead. He kept pushing, but ultimately had to settle for second place and 20 championship points.

Today‘s results see Quartararo increase his lead in the championship standings to a 34-point advantage and a 156 points total. Viñales remains in sixth, with a 95 points total. Yamaha is still in first place in the constructor championship with 184 points, and Monster Energy Yamaha MotoGP is also in first place in the team standings with 251 points.

Ending the first half of the 2021 MotoGP season on a high note, the Monster Energy Yamaha MotoGP Team will now enjoy a five-week summer break before commencing the second half of the season with the Styrian GP held in Spielberg, Austria, from 6th – 8th August.

I’m really happy, especially because during the weekend I did only bad starts, and I mean really bad, and I was actually a bit worried. But with the team we always get the job done and save the best for the race. Today it was like this, so I am so happy. It was a really good race. It was a tough one, but we did it. I think today is the perfect day to go on holiday after a victory. I will go see my family straight away to enjoy this moment and spend some time with them.

For me this was a great Sunday too! It‘s been a long time since I was last on the podium. It was good. Honestly, I‘m very happy. Actually, the second part of the race was fast. I was able to do fast laps, but I just expected a bit more from the beginning. I knew immediately when I was behind Nakagami for ten laps that I lost the race, because also the tyres suffered. Zarco was attacking me, and I was controlling the gap between me and Nakagami to make sure I wasn‘t overheating the tyres, so it was a very complicated race, but in the end, it finished in a good way.