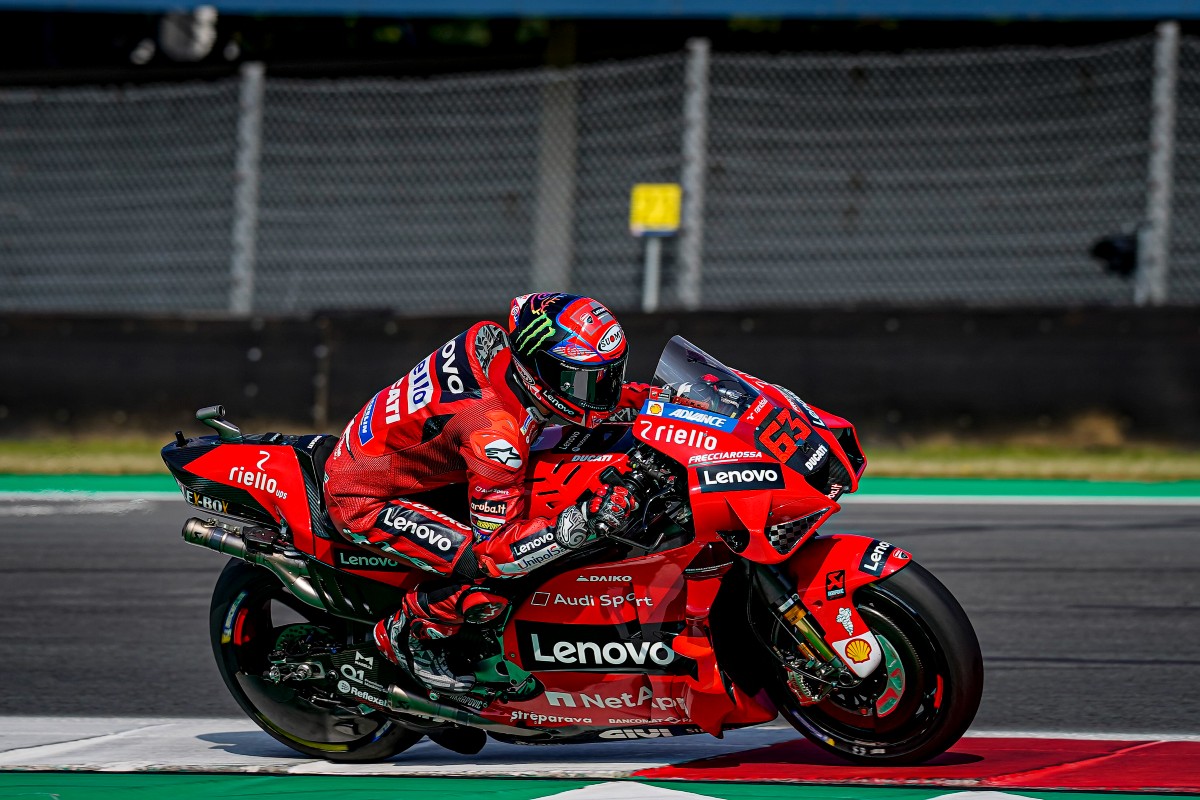 Pecco Bagnaia finished sixth at the MotoGP Dutch GP, held this afternoon at the TT Circuit of Assen. The Ducati Lenovo Team rider, who started from the front row of the grid from the third position, managed to take an early lead and set his own pace to contain Quartararo behind him during the first laps. However, Pecco, who was overtaken on lap 6, was unable to stay with the Frenchman and then engaged in a fierce battle with Nakagami for second place, which caused him to exceed the track limits twice. Forced to serve a long lap penalty, Bagnaia had to drop back into eighth place, seeing his chance to fight for the podium vanishing but still managing to recover till sixth place to earn more valuable points for the championship.

It was an unfortunate race for Jack Miller. The Australian rider, who started from the eighth position on the grid, was in the second group when, to avoid contact with the riders ahead, he had to brake, losing control of his Desmosedici GP bike and crashing out. Miller rejoined in the eighteenth position, but he was then forced to pit in by the race direction who mistakenly believed a non-existent oil leak was coming from his bike.

After the ninth round of the 2021 MotoGP season, Bagnaia now sits third in the overall standings, while Miller is fifth, 56 points behind leader Quartararo. Ducati and the Ducati Lenovo Team are both second in the Constructors’ Championship and Teams’ classification.

Today has probably been one of the most difficult races I’ve ever had in MotoGP. I tried hard to defend myself from Fabio, but it was clear I couldn’t stay with him when he passed me. In the first part of the circuit, I made up some ground, but I lost a lot from him in the last sector. It was hard fighting with Nakagami too. In my attempt to defend myself, I exceeded the track limits twice and had to serve a long lap penalty. At that point, it wasn’t easy to make up positions. I apologise to my team for this mistake, which I could have avoided, but today I really gave it all to try and bring home as many points as possible.

This is definitely not the easiest track for us, but I was hoping for a different ending to this weekend. Unfortunately, at turn five, there was a bit of confusion with Nakagami and Mir, and in an attempt to avoid a possible contact, I braked too early and lost control of the front, which caused me to crash. At that moment, I was maybe more focused on what was happening in front of me and not on my riding, and obviously, I am annoyed about this mistake. It’s a pity because it was important to get some points today, but it is what it is. We are not far behind in the Championship, so now we have to move on and try to get back to winning ways in the next two races scheduled in Austria after the summer break.

The Ducati Lenovo Team will now have a break of five weeks before returning to the track for the tenth round of the 2021 MotoGP season, the Grand Prix of Styria, scheduled from 6th-8th August at the Red Bull Ring in Spielberg, Austria.