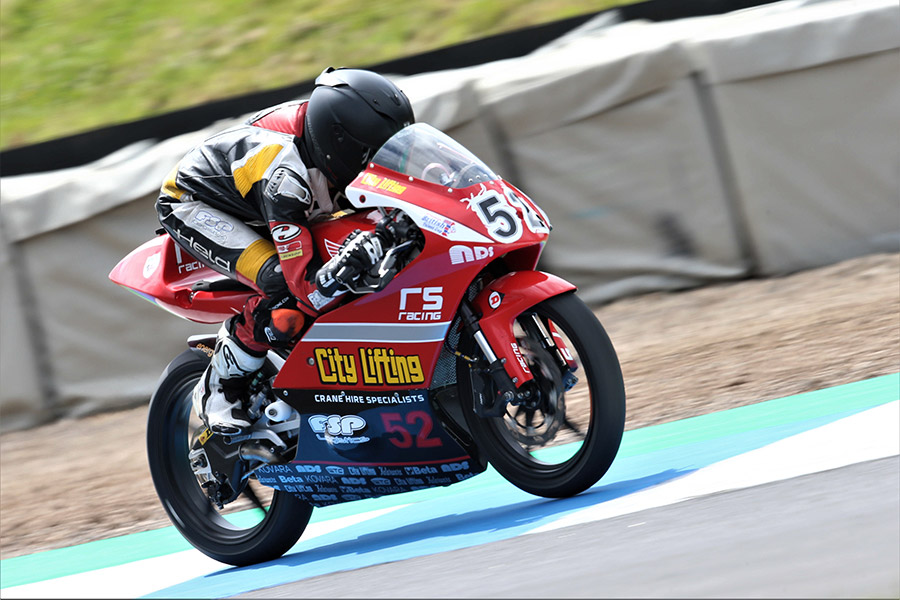 The tempo is only ramping up for the 2021 class of the Honda British Talent Cup as the paddock heads south to Brands Hatch for Round 3, with 50 more points up for grabs over another two races. Last time out at Knockhill it was Evan Belford (City Lifting/RS Racing) who took the maximum haul as he sprinted away from the rest for two victories from two, and that makes him both the man in the crosshairs and the new points leader. So can he repeat the feat?

Belford must remain the favourite – especially as Casey O’Gorman (Microlise Cresswell Racing), who did the double at the season opener, remains side-lined through injury. The number 52 also took two podiums at Brands Hatch in the season finale in 2020. But the competition will be fierce and the turf a little more familiar for many, added to a few riders already counting on podium pedigree so far this season.

Johnny Garness (City Lifting/RS Racing) is one as he heads into Round 3 now with two podiums to his name, coming home second twice in Scotland, and teammate Carter Brown took two rostrums at Round 1 before drama at Knockhill. An issue on a Warm Up lap forced him to bail out and lose the chance to compete in Race 1, that also leaving him well down the order for Race 2. But then Brown dug deep and gained more than 20 places to complete the top five, underlining his threat at the front despite starting nearly at the back. Cormac Buchanan (Microlise Cresswell Racing) also took his first podium and lost out on second in Race 2 by only a tenth, so there are a few riders heading in with their confidence high.

James Cook (Wilson Racing) is another despite not quite getting a rostrum finish so far, with his Round 1 woes now squarely behind him. Harrison Crosby (Banks Racing) also showed good speed in Scotland once again, proving a consistent frontrunner, although he’ll be looking to bounce back from a crash in Race 2. The likes of Ollie Walker (Moto Rapido / SP125 Racing) and Bailey Stuart-Campbell (Team 151s) will be pushing hard as well, and Kiyano Veijer (Microlise Cresswell Racing) and Troy Jeffrey (Stiggymotorsport) will want to keep their progress shown at Knockhill.

The likes of Ryan Hitchcock (Wilson Racing), fourth to start the season before a rockier ride, and Sullivan Mounsey (iForce Lloyd & Jones), who suffered a double DNF in Scotland, will be looking to fight back in the close battle for the top ten, top eight and top five as well, as will Jamie Lyons (C&M Motors Ltd/Tooltec Racing), with the battle near the front incredibly close.

There are also some wildcards and it will be interesting to see where they slot in, including American rider Eli Banish (Team Thorneycroft Racing) as he joins Buchanan and Veijer on the international roll call in the BTC this season.