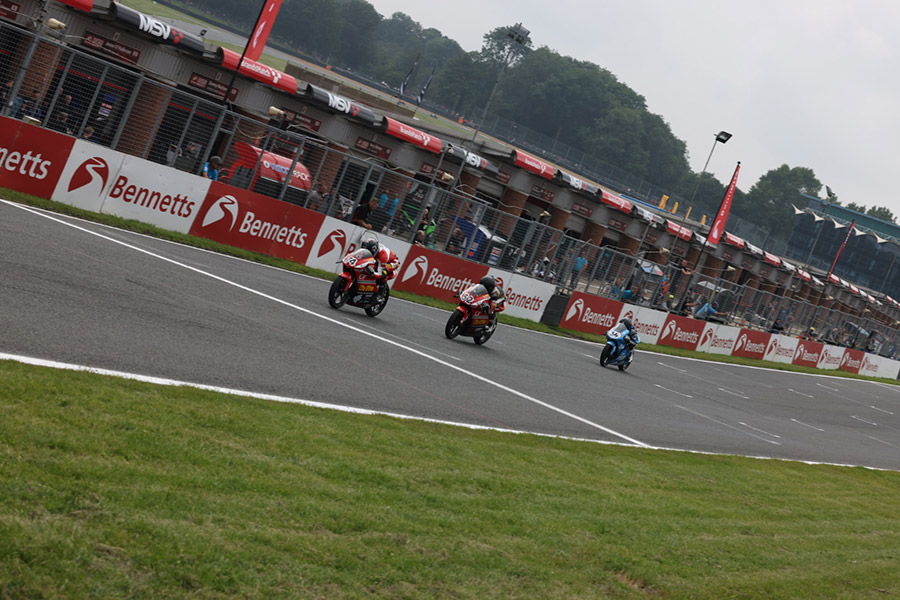 Carter Brown (City Lifting/RS Racing) took his first Honda British Talent Cup win of the season in Race 1 at Brands Hatch, duelling teammate Evan Belford throughout the 14-lap showdown and coming out on top by the flag. What started as a duel gained some company late on, however, with James Cook (Wilson Racing) managing to cut down a sizeable gap to arrive at the fight for victory and ultimately complete the podium for his first rostrum finish of the year.

At lights out it was Belford away best and the number 52 took the holeshot, with Brown slotting into second as fellow front row starter Lucas Brown (Amphibian Scaffolding / SP125 Racing) lost out a few places. Johnny Garness (City Lifting/RS Racing) got away well to take over in third, with Cook taking fourth early on.

At the front, the front duo were streaking away early but if Belford had looked ominous, Brown was right with him – and took the lead on Lap 1. That didn’t last long, however, as Belford struck back at Paddock Hill Bend next time round, beginning what would become a race-long duel for the win.

Meanwhile, Cook wasn’t into clear air. A good start for Sullivan Mounsey (iForce Lloyd & Jones) saw him strike for fourth, and then Ryan Hitchcock (Wilson Racing) got in on the action as he went on the attack. Cook was able to break clear and then get on terms with Garness, however, the number 34 then past the number 57 and setting off on his mission to close down the duel in the lead.

That left Hitchcock and Garness duelling for fourth, with Mounsey fading ever so slightly to head a huge group fight for sixth place.

As the laps ticked on, Cook’s gap to the leading duo came down and with two to go the blue Wilson Racing machine was very much back in contention for the win. It didn’t take long for a move to come either as Belford suffered a wobble and Cook struck. Heading onto the last lap it was Brown heading Cook heading Belford, but all would change before the flag.

Belford was on a charge and moved into second before taking the lead at the very next corner, straight back into the driving seat with two moves at two apexes. But Brown wasn’t done and the number 74 wasted little time slicing back through for first, heading the three-rider train coming out the final corner.

It was just 0.070 over the line but Brown kept it and with it his first Honda British Talent Cup win, putting to bed some bad luck from Knockhill in the process. Belford was forced to settle for second but nevertheless extended his points lead at the top of the standings, now over 30 points clear, with Cook losing out in the last lap battle but taking his first rostrum of the season in third, only two tenths from victory.

Hitchcock took fourth from Garness, that duel split by just 0.085, with Cormac Buchanan (Microlise Cresswell Racing) taking sixth after breaking away from the fight behind. That fight was headed by Mounsey as he got another good points haul after a tough Knockhill, defeating Jamie Lyons (C&M Motors Ltd/Tooltec Racing) by just 0.062 for seventh.

That’s it from Race 1, with plenty learned ahead of lights out on Sunday. Can Brown do the double to move up in the standings once again? Or can Belford, Cook or those on the chase come out swinging? Find out in Race 2 at 11:45 (GMT +1) tomorrow.