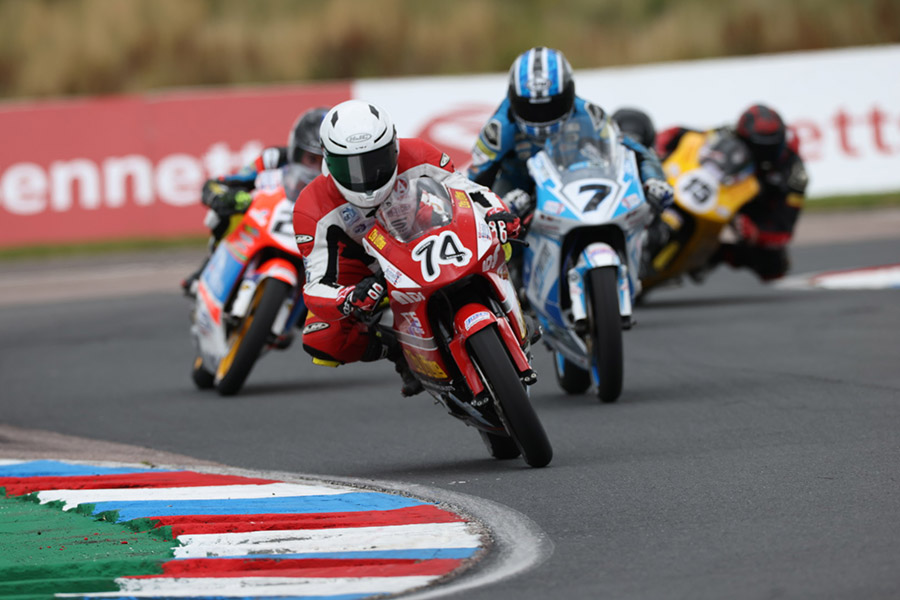 Carter Brown (City Lifting by RS Racing) came out on top in a five-rider fight in Race 1 at Thruxton, the number 74 beating polesitter Jamie Lyons (C&M Motors Ltd/Tooltec Racing) to the top step. Cormac Buchanan (Microlise Cresswell Racing) took third to get back on the podium, with points leader Evan Belford (City Lifting by RS Racing) suffering a tougher race to take sixth – and his former closest challenger in the standings, teammate Jonny Garness, crashing out late on.

Off the line, Lyons got a great start from pole to stay ahead, with Buchanan tucking into second. But very briefly, the Kiwi striking quickly to take the lead as the top two were joined by Brown in an early three-rider break.

Belford began the race with a good start to get up into fourth, a bridge between the two early groups. But that wouldn’t last long either as the fight for the lead became a six-rider scrap, with Buchanan leading Lyons, Brown, Belford, Ollie Walker (Moto Rapido / SP125 Racing) and Harrison Crosby (Banks Racing) at the front.

Drama then hit for Belford as he cut the final chicane on Lap 4 and dropped off slightly, leaving the Lyons, Brown, Buchanan, Walker and Crosby group in a fight for the win that would go down to the wire – and Belford fighting with James Cook (Wilson Racing) and and Garness, two other riders a little more used to fighting for the podium of late.

At the front it remained a constant concertina but no one was able to make a break, and starting the last lap it was Crosby ahead and Brown in hot pursuit. Lyons then made his move, sweeping round for the lead, but out of Church for the final time Brown hit the front and there he was able to stay. Holding on out the chicane and on the drag to the line, the number 74 took his second win of the year – and moved up to second in the standings too.

Lyons took second and his first podium of the season after an impressive weekend so far, and the same is true of Buchanan as he got back on the box in third. Walker was forced to settle for fourth, and drama hit for Crosby as he highsided out just before the line – losing out on a finish and bringing out the Red Flag. He got to his feet but headed to the medical centre.

Cook beat Belford to complete the top five, but there was late drama for Garness as he and Bailey Stuart-Campbell (151s Racing) came together at the end of Lap 12 and crashed out. Troy Jeffrey (Stiggymotorsport) was then classified seventh, at the head of a big group completed by Kiyano Veijer (Microlise Cresswell Racing), Sullivan Mounsey (iForce Lloyd & Jones), Lucas Brown (Amphibian Scaffolding / SP125 Racing) and Rhys Stephenson (Rocket Racing) in 11th.

Ryan Hitchcock (Wilson Racing) is sidelined through injury after a crash on Friday.