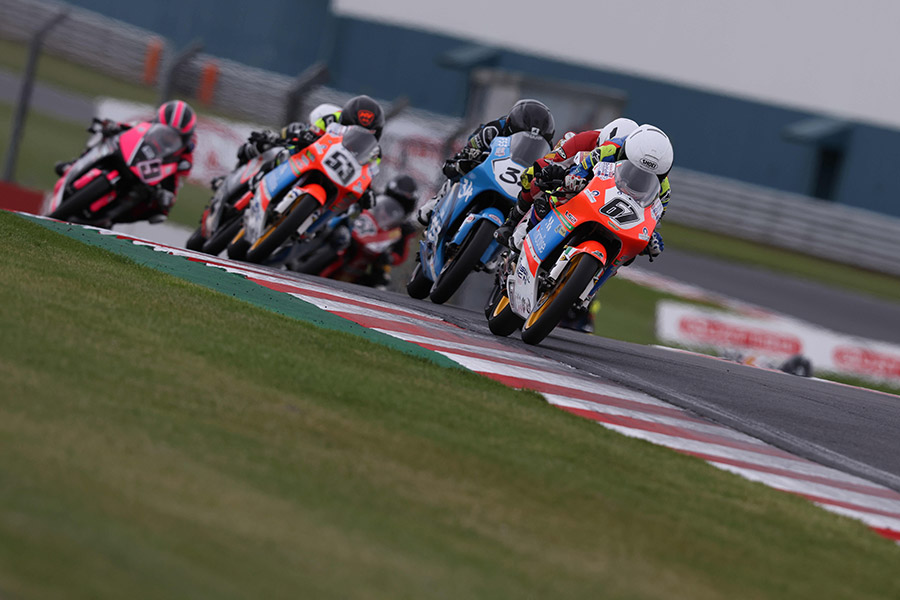 Johnny Garness (City Lifting by RS Racing) is now a race winner in 2021, the number 57 shooting away from pole in Race 1 at Donington to chip away at a gap and cross the line in some clear air. The fight for second went down to the wire, with the returning Casey O’Gorman (Microlise Creswell Racing) just pipping James Cook (Wilson Racing) at the line.

Garness took the holeshot from pole, and the number 57 barely had to look back. By half distance he had a good gap but that came down again a few laps later as O’Gorman made his way to the front of the chasing group and hunted down the race leader.

When just about in striking distance, however, O’Gorman came under attack – and Garness was able to put the hammer down again. This time it was for keeps, with the number 57 crossing the line 2.022 clear for his first victory of the year.

Behind him, a three-way battle saw O’Gorman vs Cook vs Belford, and the number 67 held onto second despite a late lunge from Cook. The two were split by just 0.066 over the line… and Belford ran into trouble.

The number 52 headed over the gravel and lost out, able rejoin just before the flag but down in P6 as both Ollie Walker (Moto Rapido / SP125 Racing) and Carter Brown (City Lifting by RS Racing) got past, the latter despite his own earlier run off when duelling Belford.

Kiyano Veijer (Microlise Creswell Racing) had a great race in P7 and he started well, fought at the front and managed to hold off Jamie Lyons (C&M Motors Ltd/Tooltec Racing) to the flag to boot. A bigger gap behind the two saw Sullivan Mounsey (iForce Llord & Jones) take ninth, ahead of another duel to the flag as Harrison Crosby (Banks Racing) held off Rossi Banham (MJL Racing) to complete the top ten.

O’Gorman back on top in Race 2

Casey O’Gorman struck back in Race 2, the number 67 on fine form once again to get back to winning ways. He beat Race 1 winner Johnny Garness (City Lifting by RS Racing) by two tenths on take two, with James Cook (Wilson Racing) on the podium again making for close company in third. But the shuffle over the line wasn’t quite so simple, with a few given time penalties for cutting the chicane, including points leader Evan Belford (City Lifting by RS Racing).

Garness took the holeshot again, this time from Row 2, with O’Gorman slotting into second, and they began to pull away after a handful of laps. But as O’Gorman struck for the lead that gap came down again, and the number 57 hit back on Lap 6. By Lap 10, O’Gorman sliced back through… but it wasn’t quite a duel, the two only just ahead of a huge freight train at the front.

The freight train went all the way to the wire but there was plenty of drama. First Kiyano Veijer (Microlise Creswell Racing) accidentally passed under yellow flags, incurring a two-second time penalty equivalent to a Long Lap, and Carter Brown (City Lifting by RS Racing) got the same for cutting the chicane. Then, in the real latter stages, points leader Belford did the very same, and got the very same two seconds added to his race.

O’Gorman pounded on at the front, and as the group shuffled and shuffled again, it all came down to the chicane – and there was a backmarker to negotiate too. O’Gorman did that and swept past on the exit for his first win since his double to open the season, with Garness and Cook coming out on top to complete the podium as the penalties applied to those around them and shuffled the shuffled even further.

Jamie Lyons (C&M Motors Ltd/Tooltec Racing) is classified fourth after that key drama, with Bailey Stuart-Campbell (151s Racing) and Ollie Walker (Moto Rapido / SP125 Racing) completing the top six ahead of the first finisher with a penalty: Brown. He’d been ahead of Veijer, who nevertheless still impressed with a step forward in eighth place and a race running right at the front. Belford was shuffled down to an expensive ninth in the standings, and he’ll be looking for more on Sunday.

After a bumper day of races and a few dramatic penalties shuffling the field, Belford now leads the way by just 22 points at the halfway point of the season. What will Sunday bring?