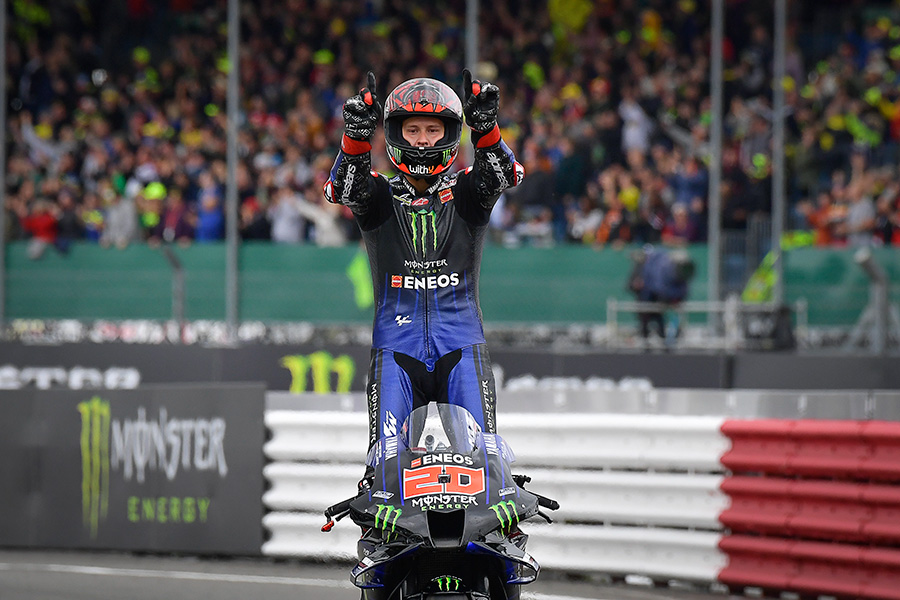 Fabio Quartararo (Monster Energy Yamaha MotoGP) unleashed some serious speed at Silverstone on Sunday, the Frenchman on fine form to fight his way through to the lead and then put the hammer down to win the Monster Energy British Grand Prix. Behind, Alex Rins (Team Suzuki Ecstar) stormed through for second place and a podium to bounce back from a tougher season so far, and in third place some history was made: Aleix Espargaro (Aprilia Racing Team Gresini) held off Jack Miller (Ducati Lenovo Team) to take Aprilia’s first ever podium in the MotoGP™ era.

Pol Espargaro (Repsol Honda Team) took the holeshot from pole, with Quartararo initially up into second. But Francesco Bagnaia (Ducati Lenovo Team) was on the move, past Aleix Espargaro into third and then attacking El Diablo. Drama struck just off that fight too as Marc Marquez (Repsol Honda Team) and Jorge Martin (Pramac Racing) came together once with Martin up the inside, and then the eight-time World Champion tried to take it back. With Martin reacting to those ahead to have opened a small gap, the number 93 made it just ahead but then collected the rookie. He apologised and it was deemed a racing incident.

That early race action was still led by Pol Espargaro, with Bagnaia in second and Aleix Espargaro shadowing. The Aprilia then went for the lead but headed wide, and not long after that Quartararo started to make his moves. By 16 to go the Yamaha had worked his way to the front, and from there the hammer went down.

The battle behind raged on, with Pol and Aleix Espargaro ahead of Bagnaia and reigning Champion Joan Mir (Team Suzuki Ecstar). Jack Miller (Ducati Lenovo Team) was in the mix too, but the rider starting to make serious progress was Rins.

By 13 to go, Rins was into third with Quartararo gone out front and Aleix Espargaro holding strong in second. Pol Espargaro was starting to fade slightly, but the big change was Bagnaia as the number 63 sunk to the back of the group, struggling to stay with them.

Brad Binder (Red Bull KTM Factory Racing), meanwhile, was doing the opposite. The South African was on an absolute Sunday charge once again, and was past Mir and homing in on Pol Espargaro. Bagnaia had dropped well back and Alex Marquez (LCR Honda Castrol) had moved well forward, as a change up ahead then ultimately decided the podium. Aleix Espargaro headed wide, and Rins needed no second invitation as he moved into second.

Quartararo was gone, and by the final lap the key battle was focused on Aprilia, on the verge of making history. Rins was just out of reach although still tantalisingly close, but Miller was on the march. The Australian struck to momentarily break a thousand Noale hearts, but Aleix Espargaro hit straight back and made it stick. A few apexes were all that remained between the number 41 and history, and he kept ahead for that mythical first podium.

Quartararo made the masterclass look easy but far from it, Rins got back on the box after a tougher 2021 so far, and Aleix Espargaro ended a long, long wait for a podium – for man and machine. Not since 2014 has he been on the box, and Aprilia never have in the MotoGP™ era.

Miller was denied but came home top Ducati, with Pol Espargaro taking fifth and a great result from pole. And sixth went to Binder, the South African raising more eyebrows on race day and adding the final piece in a history-making race: Yamaha, Suzuki, Aprilia, Ducati, Honda and KTM in the top six makes it the first time since 1972 six factories have been in the top six.

Iker Lecuona (Tech 3 KTM Factory Racing) also put in a Sunday stunner to take seventh, not so far from Binder either as the Spaniard leapfrogged compatriot Alex Marquez, who took eighth. In the latter stages Mir faded to ninth, and he was only just ahead of another charging KTM as Tech 3 KTM Factory Racing’s Danilo Petrucci completed the top ten. Johann Zarco (Pramac Racing) was close behind too in P11, before a slightly bigger gap back to Enea Bastianini (Avintia Esponsorama), Takaaki Nakagami (LCR Honda Idemitsu) and then Bagnaia, who took P14 in the end. Luca Marini (Avintia VR46) picked up the final point.

Remy Gardner (Red Bull KTM Ajo) took what could be a crucial victory in the Monster Energy British Grand Prix, the Australian holding off Marco Bezzecchi (Sky Racing Team VR46) as the Italian was forced to settle for second. Lightech Speed Up’s Jorge Navarro back on the podium in third position to show some more serious speed at Silverstone.

Bezzecchi took the holeshot initially, but home hero Sam Lowes (Elf Marc VDS Racing Team) was quick to pounce and lead his home race. Navarro was sitting ahead of Gardner and Raul Fernandez (Red Bull KTM Ajo) on the opening lap but soon, the number 87 was up to P3 as Bezzecchi passed Lowes for the lead.

Gardner then found a way past Lowes for second, with the top five – Bezzecchi, Gardner, Lowes, Navarro and Fabio Di Giannantonio (Federal Oil Gresini Moto2) – split by less than a second. Raul Fernandez was a second back of the group in P6 as teammate Gardner hit the front. Not for long though. Bezzecchi pounced back half a lap later but on the exit of Turn 14, the Italian was out of the seat and it caused Gardner to sit up but handed him the race lead, with the top five still locked together.

Just after Gardner had set the fastest lap of the race, Bezzecchi scooped up some slipstream and made a pass for the lead stick at Stowe. Bezzecchi, Gardner and Lowes had a 0.8s lead over fourth place Navarro with nine laps to go and Gardner, again at Turn 13, dived up the inside of Bezzecchi. The Aussie was back in the lead.

With four laps to go, huge drama in the Championship chase unfolded. Raul Fernandez suffered a huge crash at Turn 12 and was out of the race, thankfully the Spaniard was back up on his feet. But with Gardner leading and Bezzecchi a close second, the rookie sensation’s title hopes took a big dent.

In the end, Gardner held on with a fantastic last lap and a fantastic race in general to take a crucial 25 points, with Bezzecchi 0.4s away from the win after pushing the Australian all the way. Navarro claimed a first podium since the 2019 Valencia GP, the Spaniard beating Lowes by 0.3s to deny the latter a home GP podium.

It seemed hard to look past Romano Fenati (Sterilgarda Max Racing Team) for victory at Silverstone, and on race day the Italian more than proved why. Leading from lights out and initially shadowed by Niccolo Antonelli (Avintia VR46 Academy), the number 55 was then able to pull away in the final few laps to take that rarest of prizes: a breakaway Moto3™ win. Antonelli, on return from injury and still riding through the pain barrier, held on for a stunning second, however, with Dennis Foggia (Leopard Racing) just coming out on top in a duel for third against rookie Izan Guevara (Valresa GASGAS Aspar Team) after a fabulous race from the Spaniard.

At lights out, Gabriel Rodrigo (Indonesian Racing Gresini Moto3) was just about able to get alongside Fenati, but the Italian held on round the outside and from there, he never looked back. Antonelli moved up into second to begin his charge, with Andrea Migno (Rivacold Snipers Team) initially in third as the trio made an early break for it.

By 14 to go, Fenati, Antonelli and Migno were still stuck pretty close together, and the gap back to Darryn Binder (Petronas Sprinta Racing) at the head of the fight for fourth was already up to nearly a second and a half. But heartbreak would then hit for Migno as the Italian pulled off the track with an issue – leaving Fenati and Antonelli with even more space back to the chasing pack.

The chasing pack was then one group fighting for third ahead of a bigger gap back to the battle for tenth, which included Championship leader Pedro Acosta (Red Bull KTM Ajo) and closest challenger Sergio Garcia (Valresa GASGAS Aspar Team). After some early progress the two then watched the group ahead escape, making it a handful of points up for grabs in their battle at the top.

Back at the front, the Fenati-Antonelli duo pounded on. Over three seconds clear and pretty well matched on rhythm, there wasn’t much to choose between the two. But as the laps ticked on Antonelli, riding through the pain barrier, started to fade slightly – just as Foggia and Guevara managed to pull away from the group battle behind them.

Over the final two laps, Fenati really hammered home the advantage and crossed the line over a second and a half clear, putting in as close to perfect a Moto3™ race weekend as possible. Antonelli held on to second and although the gap was coming down rapidly on the last couple of laps, Foggia and Guevara had their own duel to focus on.

The rookie was able to strike and take over in third, but Foggia found an answer. And from there, the number 28 stayed glued to the rear tyre of the Leopard machine, but there was no way through. It went down to Woodcote and Guevara tried the inside line on the drag to the line, but it wasn’t quite enough. Foggia takes anther podium, but Guevara’s fourth is his best result so far and rounded out a fabulous race from the rookie.

The battle for fifth behind them was won by Tatsuki Suzuki (SIC58 Squadra Corse) as he pipped Jaume Masia (Red Bull KTM Ajo), with Darryn Binder forced to settle for seventh. There was then another even bigger gap back to the battle for eighth, with Deniz Öncü (Red Bull KTM Tech3) winning that ahead of front row starter Riccardo Rossi (BOE Owlride).

Another gap back to a crucial fight behind saw Carlos Tatay (Avintia Esponsorama Moto3) able to gain a bit of breathing space for tenth, with Acosta classified 11th after a one position penalty for John McPhee (Petronas Sprinta Racing), the number 17 taking P12 despite some early drama that dropped him back. Ayumu Sasaki (Red Bull KTM Tech 3), Filip Salac (CarXpert PrüstelGP) and Rodrigo completed the points, with Garcia losing out late on and taking P16.