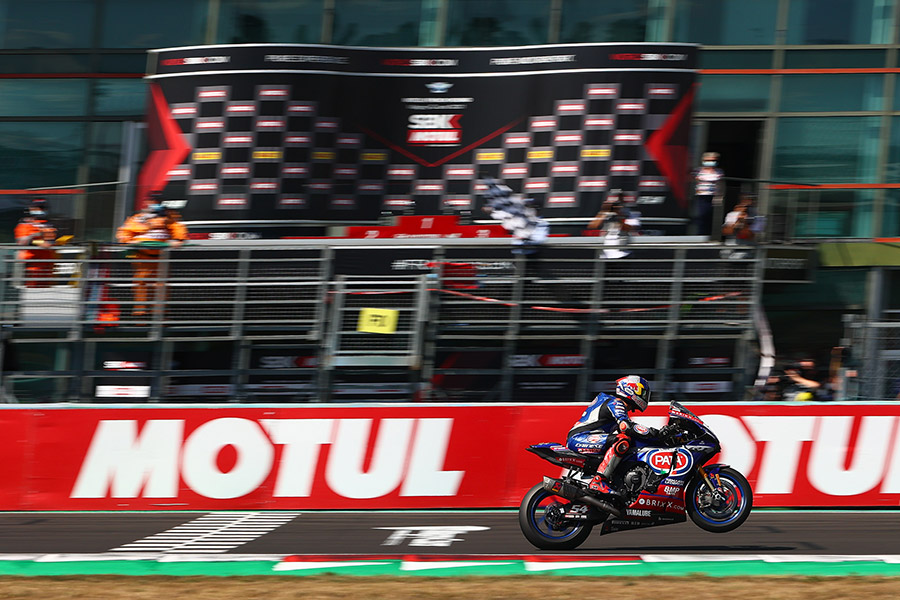 Race 2 for the Motul French Round at the Circuit de Nevers Magny-Cours gave Toprak Razgatlioglu (Pata Yamaha with Brixx WorldSBK) his second win of the weekend to extend his Championship lead over Jonathan Rea (Kawasaki Racing Team WorldSBK). A race that saw their rivalry ignite was relentless from the start, with the two putting on a spectacular show clear of the opposition.

Razgatlioglu got the better start from pole position and initially held the lead of the race but used a wider line through the long right-hander of Estoril, allowing Rea to sneak up the inside to take the lead. On the run down to Turn 5, Alex Lowes (Kawasaki Racing Team WorldSBK) wanted to get involved in the lead battle but Razgatlioglu and Rea were able to keep him at arm’s length.

Scott Redding (Aruba.it Racing – Ducati) was running in third from the early stages of the race after jumping up from the second row of the grid as he claimed his first podium of the weekend after a challenging weekend for the British rider. Third place for Redding meant he lost ground in the Championship to leader Razgatlioglu, while Rea also gained on Redding in the standings.

The race-winning move came on Lap 11 after an incredible two laps of battling between Razgatlioglu and Rea with the Turkish star overtaking Rea into the Turn 5 hairpin of Adelaide on Lap 10 before the six-time Champion responded into the Imola chicane. Rea retained the lead of the race for just another lap before Razgatlioglu was able to pass Rea again into Adelaide. The pair battled it out throughout the race before Rea settled for second after making a save in the closing stages of the race.

The final race of the Motul French Round in the FIM Supersport World Championship provided action and drama throughout the race which was Red Flagged on the opening lap, with Manuel Gonzalez (Yamaha ParkinGo Team) taking his first ever victory in WorldSSP, becoming the second-youngest race winner in the class, while Turkish star Can Öncü claimed his maiden podium as he finished in third place behind Championship leader Dominique Aegerter (Ten Kate Racing Yamaha).

Like in Race 1 yesterday, there was an early Red Flag deployed after a crash on the opening lap involving Luca Bernardi (CM Racing), Dominique Aegerter (Ten Kate Racing Yamaha) and Jules Cluzel (GMT94 Yamaha) at the Lycee Complex. Bernardi and Cluzel were taken to the medical centre following the crash, while Aegerter was able to take his bike back to the pits for his team to work on before the restart. Both Bernardi and Cluzel are conscious. Bernardi was diagnosed with a back injury and Cluzel with a head injury and cervical strain; both taken to Nevers Hospital for further assessments. The race after the Red Flag was shortened from 19 laps to 12.

Aegerter was able to re-join the race when the restart got underway and found himself as the de facto pole sitter with Bernardi not in the race, with the Swiss rider getting a good start to move into the head of the field. He found himself under pressure from Spanish rider Gonzalez and Can Öncü (Kawasaki Puccetti Racing) with the Turkish star making a move at the Turn 5 Adelaide hairpin as he gained around five positions.

Aegerter soon reclaimed the lead of the race and Gonzalez followed him through on Öncü to move into second before he made a move on Lap 2 on Aegerter into the Nurburgring chicane to take first place, although Championship leader Aegerter responded into the right-hander hairpin of Adelaide a lap later. The battle raged on until the final laps with Aegerter and Gonzalez going elbow-to-elbow right until the Lycee Complex; Aegerter looking to make a move into Turn 15 but Gonzalez was able to cut back to take the lead through the chicane.

Öncü dropped back from the lead two as the race progressed into the clutches of teammate Philipp Oettl, with the pair separated by just 0.195s at the finish line as Öncü claimed his first WorldSSP podium and the first for Turkey since Kenan Sofuoglu at Qatar in 2017. Oettl came home in fourth place as he responded from a difficult Saturday.

The final race of the Motul French Round in the FIM Supersport 300 World Championship was a typically enthralling encounter as Spanish rider Adrian Huertas (MTM Kawasaki) claimed his second victory of the weekend after a race-long battle with his rivals at the Circuit de Nevers Magny-Cours, as he beat title contender Tom Booth-Amos (Fusport – RT Motorsports by SKM – Kawasaki) by less than half a second.

Huertas and Championship contender Booth-Amos have been inseparable in the title battle and that continued on track in the 13-lap Race 2 encounter with just three tenths separating the pair at the end of the race, with Spanish rider Huertas extending his lead in the Championship standings with victory.

The pair had been battling it out in the traditional lead group but were able to hold the lead despite pressure from behind, with reigning Champion Jeffrey Buis (MTM Kawasaki) claiming third place just one tenth behind Booth-Amos, as well as finishing half-a-second clear of Dean Berta Viñales (Viñales Racing Team) in fourth.