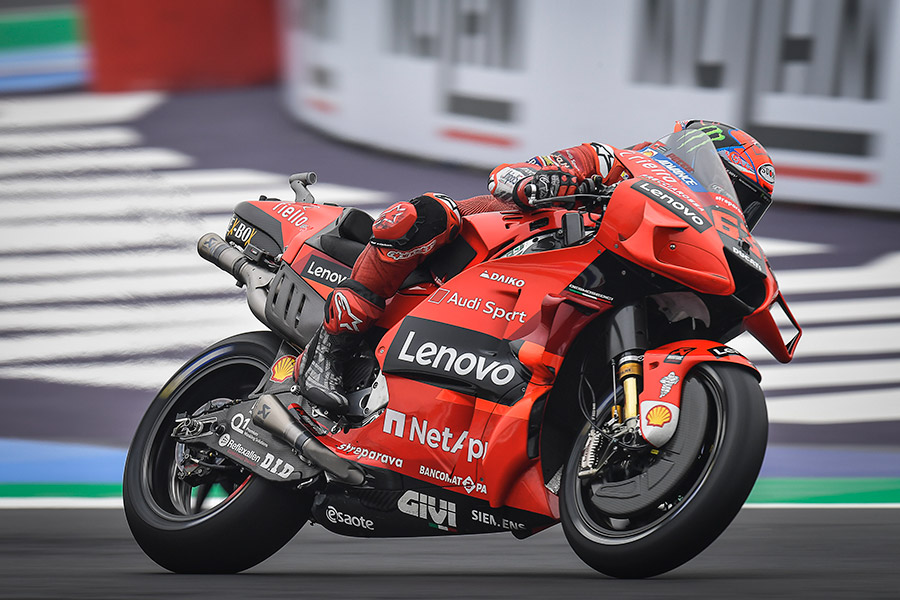 For the first time since Casey Stoner in 2008, a Ducati rider has taken four consecutive MotoGP™ pole positions and that rider is Francesco Bagnaia (Ducati Lenovo Team). The Italian stormed through from Q1 to grab a crucial Saturday afternoon pole at the Gran Premio Nolan del Made in Italy e dell’Emilia-Romagna, and on a day that saw Championship leader Fabio Quartararo (Monster Energy Yamaha MotoGP) falter as he failed to make it through to Q2. El Diablo is therefore set to line up in 15th ahead of his first match point in the title fight.

Jack Miller (Ducati Lenovo Team) made it a factory Ducati a 1-2, missing out by mere hundredths, with Luca Marini (Sky VR46 Avintia) earning a maiden MotoGP™ front row to make it three Ducatis on the front row for the first time ever. After Saturday, despite the standings, it’s very much Advantage Bagnaia.

Q1 was a serious clash of the titans. Featuring both the title contenders and a whole host of fast faces after difficult conditions so far this weekend, it could have proved pivotal – and it did. All eyes were, understandably, locked on Bagnaia and Quartararo, and the two were putting on quite a show. Pecco, the lap record holder at the track but back from fully dry, peak conditions at the San Marino GP, was putting the pedal to the metal around a slightly damp Misano, and by mid-session the Italian was shearing chunks off his laptimes – beating his own best four times.

That was as Quartararo struggled a little but remained in contention to move through, the Frenchman seemingly finding enough time when he needed it, just not enough to threaten Bagnaia. But then Alex Marquez (LCR Honda Castrol) split the two. Then it was Alex Rins (Team Suzuki Ecstar). Finally, Iker Lecuona (TEch3 KTM Factory Racing) took over in second behind Pecco and it was all coming down to the final push.

The Italian’s gap at the top was seven tenths, so with Quartararo hovering half a second down it seemed possible. But crossing the line, possible it proved not – and it was Lecuona heading through to Q2 in second, with the Championship leader in Q1 for the first time and failing to make the cut. To add insult to injury, his best lap was then also cancelled so it’s actually 15th for the Frenchman.

Reigning Champion Joan Mir (Team Suzuki Ecstar) crashed in Q1, rider ok, as did and were Brad Binder (Red Bull KTM Factory Racing), Ducati wildcard Michele Pirro and Enea Bastianini (Avintia Esponsorama) – leaving all looking for a comeback when the conditions look like they could change for the much better on Sunday.

From the outset, the spotlight remained on Bagnaia and the show continued to roll in from the Ducati rider. Setting a 1’33.045 early in the session, he was on rails and just kept putting in the laps. The drama came from elsewhere.

An out-the-seat moment for Marc Marquez (Repsol Honda Team) left him pulling off a hero save but then looking a little uncomfortable, Jorge Martin (Pramac Racing) crashed twice, Danilo Petrucci (Tech3 KTM Factory Racing) took a tumble and then so did teammate Lecuona. Then, Marc Marquez’ struggles went from wobble to crash, the number 93 tumbling late on but rider ok.

That created a few Yellow Flags for riders to navigate in their quest for a lap, and Bagnaia did just that – even on his final push, just far back enough from the Marquez crash to put in another effort. But he wasn’t going faster than the 1’33.045, although all was not lost as only two riders were putting together a serious challenge.

The first of those was Miller. A mixture of red and orange sectors showed the Australian was very much on terms with his teammate’s provisional pole lap, and as he crossed the line it really was incredibly close. But it remained in Pecco’s favour, the Italian staying top by just 0.025 but a Ducati 1-2 set to take on Misano.

That was despite the next challenge for the front row, because the only rider who made any threatening gains elsewhere in the session was Marini. The rookie put in a stunning effort to move himself onto a provisional front row for his home Grand Prix, and even more impressively within a tenth of pole. Ultimately unchallenged, that’s therefore the first Ducati 1-2-3.

The final dash of drama came courtesy of Johann Zarco (Pramac Racing) as the Frenchman slid out and kept sliding, still hanging on but rider ok.

Bagnaia’s dream grid was probably him on pole and Quartararo outside Q2, so whatever incantations the Ducati rider has been doing, there’s an argument in there somewhere for the existence of magic, religion, luck, or a combination of all three. He’ll head the grid from Miller, the Australian already stating he’s riding with common sense and Ducati in mind, with Marini aiming more for the top ten from third.

Marc Marquez had to settle for seventh after a troubled Q2, but Lecuona lines up alongside his compatriot in P8 for his best-ever MotoGP™ qualifying result. Petrucci makes it a day to remember for Tech3 KTM Factory Racing on the Italian’s final race on home soil in ninth, with Zarco’s late crash in his pursuit of a better starting place leaving him in tenth. Aleix Espargaro (Aprilia Racing Team Gresini) and the double crash for Martin see the Spaniards launch from P11 and P12.

Sam Lowes (Elf Marc VDS Racing Team) is on pole for the sixth time in 2021 after the British rider mastered the tricky Moto2™ Q2 conditions at the Gran Premio Nolan del Made in Italy e dell’Emilia-Romagna. It’s Lowes’ 17th intermediate class pole, making him the rider with the most in the class. It was close though, with his 1:36.510 only 0.045 faster than second place Jorge Navarro (+EGO Speed Up), with Augusto Fernandez making it two Elf Marc VDS Racing Team machines on the front row as he took third.

Championship leader Remy Gardner (Red Bull KTM Ajo) took P14 after a tougher day, and teammate and challenger Raul Fernandez took P9 despite a crash… with both looking to move through on Sunday.

Navarro was on another level in a crash-filled Q1, although Albert Arenas (Aspar Team Moto2) was able to cut the gap to three and a half tenths to move through in second, joined by Hector Garzo (Flexbox HP40) and Bo Bendsneyder (Pertamina Mandalika SAG Team).

With no rain in the air and the track continuing to dry, the lap times got quicker and quicker in the chase for pole. Navarro came through to immediately set the pace, with Gardner lingering down in P15 with five minutes to go.

There were a few more tumbles too. Both Xavi Vierge and Petronas Sprinta Racing teammate Jake Dixon crashed at Turn 15 – one after another – with Celestino Vietti (Sky Racing Team VR46), Ai Ogura (Idemitsu Honda Team Asia) and Stefano Manzi (Flexbox HP40) later crashing out as well.

Meanwhile, Augusto Fernandez and Aron Canet (Aspar Team Moto2) were on a charge and got into P2 and P3 respectively behind Navarro, before another crash added a dash of drama: Raul Fernandez tucked the front at Turn 2 and the title contender was in the gravel. All these yellow flags from the crashes were hurting Gardner’s progress, and down in P15 still, the Aussie had one lap left to try and climb the rankings…

Despite improving his time on the last lap, the Australian was only able to make up one spot to P14, although the crash for his teammate did put paid to progress for the Spaniard too and Raul Fernandez is ninth.

At the top of the timesheets, Lowes managed to avoid the drama to put in two laps good enough for pole though, the Brit edging out Navarro to become the Moto2™ rider with the most pole positions.

Marcos Ramirez (American Racing) completes the second row, ahead of Manzi, who also held onto P7 in the end despite his tumble. The Italian will have reigning Moto3™ World Champion Arenas and title-hunting Raul Fernandez for company on Row 3. Somkiat Chantra (Idemitsu Honda Team Asia) rounded out the top 10.

Niccolo Antonelli (Avintia VR46 Academy) dominated in the damp at the Gran Premio Nolan del Made in Italy e dell’Emilia Romagna on Saturday, topping Q1 by 1.2 seconds and then slicing to the top in Q2 for an impressive pole position – and his first since 2019. He’s joined on the front row by Filip Salač (CarXpert PrüstelGP), six tenths down but taking second, with Riccardo Rossi (BOE Owlride) completing an all-KTM front row.

Championship leader Pedro Acosta (Red Bull KTM Ajo) put in a solid session to take fifth, the same grid position as the last race he won, the Styrian GP. For key rival Dennis Foggia (Leopard Racing) it seemed more of a disaster as he qualified P14… but his second to last win – the Aragon GP – was from that very same position, so it’s set up for a stunner on Sunday!

Q1 was damp and star-studded, with Antonelli one of the protagonists and ultimately topping the session too – by an incredible 1.2 seconds. That was ahead of Rossi, with John McPhee (Petronas Sprinta Racing), back on track despite struggling with illness, third and Jaume Masia (Red Bull KTM Ajo) fourth.

That leaves Romano Fenati (Sterilgarda Max Racing Team), who has previously dominated at Misano in the wet, missing the cut by just 0.019, and San Marino GP podium finisher Andrea Migno (Rivacold Snipers Team) was eighth. He’ll start well down the order, as will Tatsuki Suzuki (SIC58 Squadra Corse), who is a former polesitter and winner at the track but faller in Q1. Wildcard Mario Aji (Honda Team Asia) did a solid job to split the two veterans on his debut.

Jeremy Alcoba (Indonesian Racing Gresini Moto3) was the only other crasher after Suzuki, riders both ok.

After coming through Q1 with a 1.2s advantage, the Italian was straight down to business in the pole position battle and halfway through Q2, on a damp but drying track, Antonelli was 1.3s faster than Ayumu Sasaki (Red Bull KTM Tech3) – with the Japanese rider crashing unhurt at Turn 14 with six minutes to go. Salač then went P2 to cut Antonelli’s gap down to 0.8s, but the latter almost immediately extended his lead to 1.5 again.

With three minutes to go meanwhile, Foggia was P18 and last in the session. That was as Acosta shot up to P3, and although the points leader was shuffled down to fifth, Foggia could only move up to P14.

Antonelli, Salač and Rossi head up the grid, with rookie due Izan Guevara (Gaviota GASGAS Aspar Team) and Acosta in fourth and fifth. Masia went from Q1 to sixth, locking out the second row.

Sasaki is tenth ahead of a good day for rookie Adrian Fernandez (Sterilgarda Max Racing Team), and they’re joined on Row 4 by McPhee.

Yuki Kunii (Honda Team Asia) is next up at the head of Row 5, and the Japanese rider has Foggia alongside. The San Marino GP winner and Championship challenger has some work to do on Sunday, although it should be dry and as aforementioned, he won from the same grid position at Aragon.

If Foggia wants to keep the title fight alive, he’ll have to gain at least a handful of places – but Acosta must win to take the crown anyway. Everything is in play on Sunday, so tune in at 11:00 (GMT +2) for the first pivotal title battle of the season.