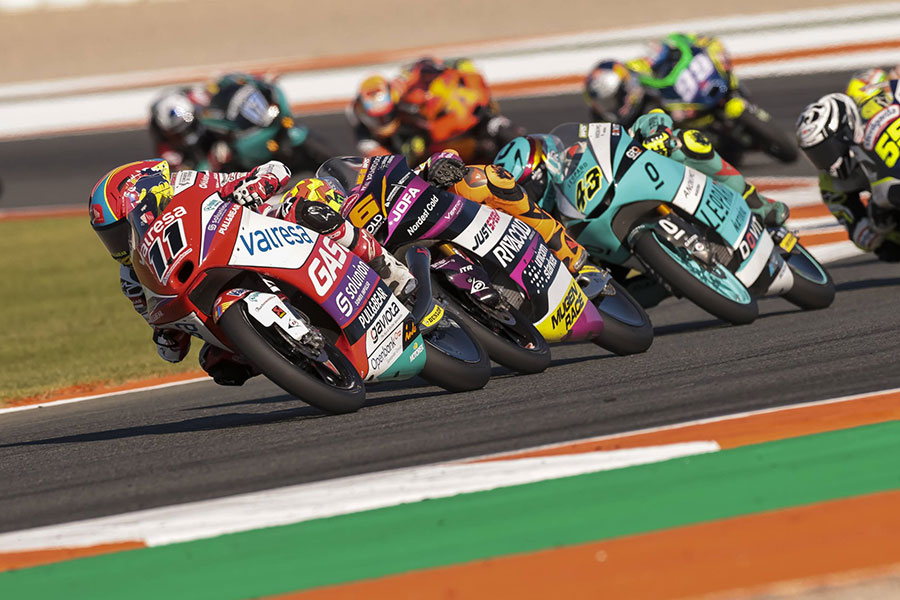 The Valencia GP hosted a great race to the fans who came back to the stands after a long time. Valresa GASGAS Aspar Team riders stayed during all the race in the fastest group, finishing 2nd Sergio García and seventh Izan Guevara.

Moto3 race was a continuous fight in the front group. Among the fastest riders, Sergio García and Izan Guevara battled for the win during all the race. In the last laps, it was Sergio who maintained his position in the front group, and finished 2nd just for 43 thousandths. This result keep him as third in the standings, just after Pedro Acosta and Dennis Foggia.

His teammate Izan Guevara was also in the front during the most of the race. But his rear tyre degraded so quickly and he had to battle to maintain himself in the group. The Valresa GASGAS Aspar Team placed 7th and was 8th in the championship, as second best rookie of the season.

Thanks to this results, the Valresa GASGAS Aspar Team finished second in the Team’s world Championship.

2nd Sergio García (+0.043):
“I’m so happy as today’s race was very difficult and also, I was fighting for the 3rd place in the championship. Masia was in the front group too and I couldn’t be calm as I didn’t want to fell and lose this 3rd place, after fighting for it during al the year. Today I fight a lot, overtaking like the race demanded to be in the front. I’m very happy for the podium and also for getting the 3rd place in the overall standings. Now it’s time to rest and start thinking in the next season.”

7th Izan Guevara (+1.209):
“Overall I’m happy for the race. The rear tyre was so degraded in the 7th lap and I struggled to keep the pace. But I keep pushing, working more with the front tyre and I finished the race the best I could. It was a pity not being in the podium, as I had a good pace here in Valencia. I’m so happy for this season’s progress and I feel strong for 2022”.