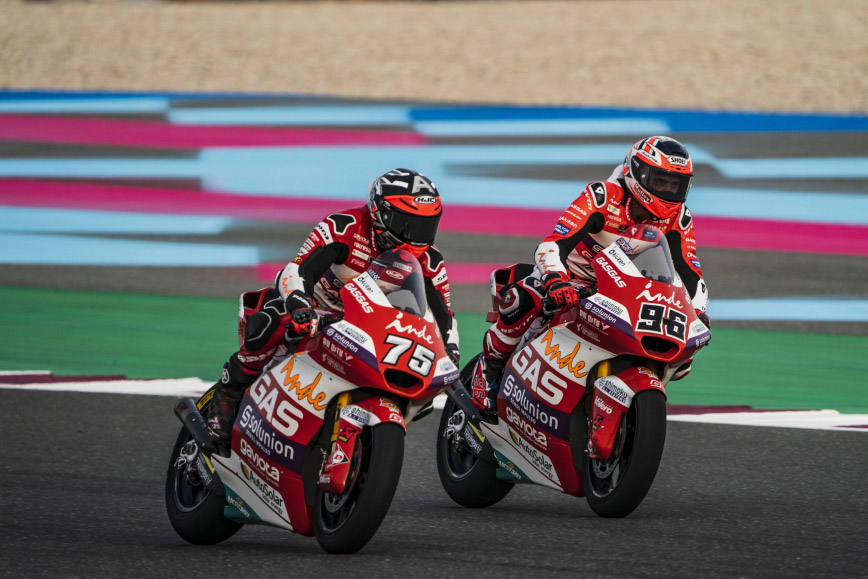 The Inde GASGAS Aspar Team has completed the first race of the season just off top 10, with Jake Dixon eleventh and Albert Arenas 12+1. Dixon had achieved seventh position on the grid and went into the race confident in his chances and his pace, but a couple of incidents on the first lap, in the first corner and in the second sector, have left him out of the top 20. From there, Dixon had to start a comeback that has taken him just outside top 10, but on his way he has lost time overtaking other riders and has lost the chance to fight for the podium on his return to the Inde GASGAS Aspar Team.

Albert Arenas started the race from fifteenth place on the grid and has lapped constantly in 2:00, what has allowed him to fight for the points positions until he crossed the finish line in thirteenth. The Inde GASGAS Aspar Team rider has gathered information for the team’s next challenges, the first of which will be the Indonesian Grand Prix on the weekend of March 20. Celestino Vietti, the first winner of the season, will arrive there as leader of the championship.

11th Jake Dixon (+18.958):
“Turn 1 and 2 was a disaster! Being that far back – outside the top twenty – on the first lap meant it was so hard to try and come back. I had to pass 10-11 riders and it took a long time. I think I lost ten seconds and if you take that away from the final race time then we would have been battling for the podium. So, we had the pace but the first lap held me back. It’s a long season and this is just the start.”

13th Albert Arenas (+26.139):
“Good to get the first race out of the way, even if I’m not totally happy with how it went because I was pretty on-the-limit. We got some good information for the next couple of races and will focus now on making a forward step and keep making laps to improve.”