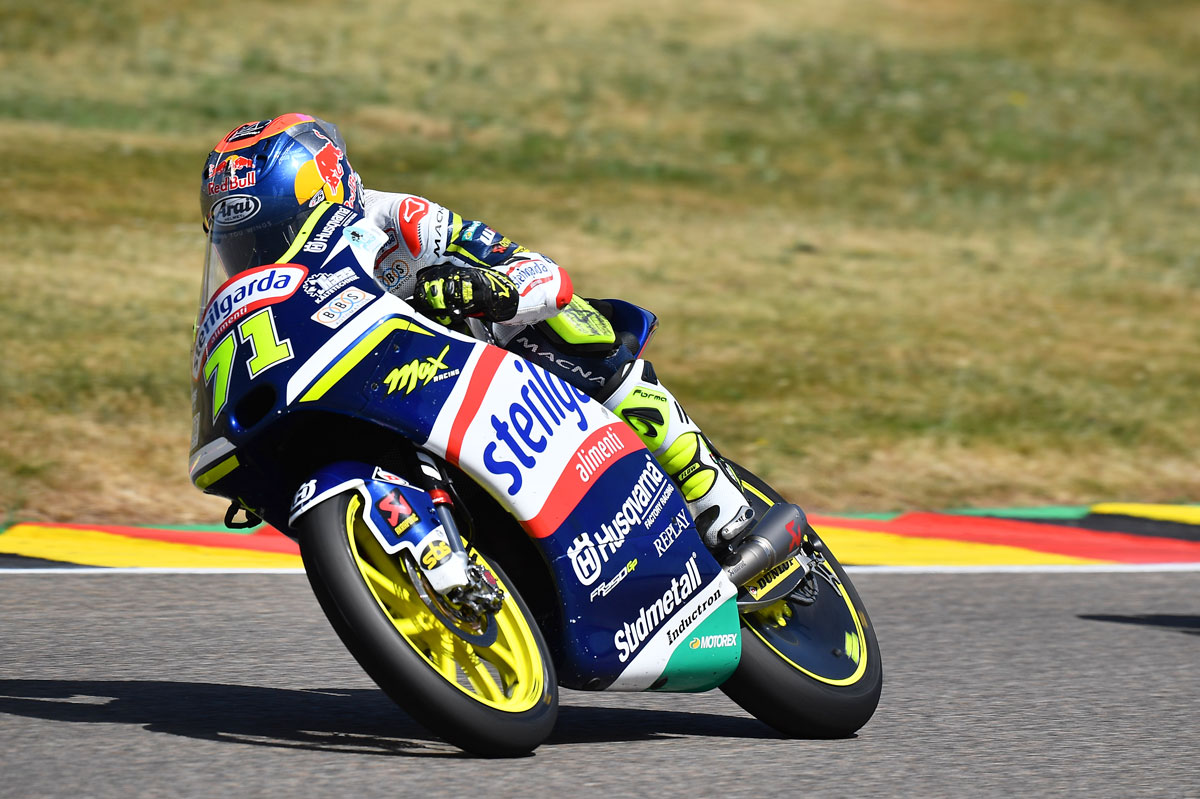 Today’s German GP saw an excellent result for Ayumu who, on a left track and with a clavicle injury, which limits him in the left turns, he gritted his teeth and brought home a great fourth position. The Japanese rider started cautiously from the fourth box on the grid, passing eighth at the end of the first lap. With a big push he recovered to the fifth position, reached at the beginning of the fifth lap.

Ayumu managed his strength well, which was not at its best, given the recent injury, and managed the tires with great maturity in the strong heat of the Sachsenring. Soon the winner of the race broke away from the group, while the group of pursuers gradually became less numerous. Ayumu in the middle of the race took fourth position, which he defended with fast laps.

In the last laps, due to the not perfect physical form, he moved a few tenths away from the podium, closing fourth. It is Ayumu’s second fastest lap of the race, made on lap 4, when he turned in 1’26.523. This result is very important in view of the Championship, as it consolidates his sixth position, allowing him to reduce the gap from those who preceded him more closely.

AYUMU SASAKI :
“I am happy with today’s race because we managed to finish in P4. Last week I was not expecting to be back here in Germany, so I am happy to finish the race. Of course, the podium was close, so I am a little bit disappointed, but considering that I wasn’t sure about running I am happy with the result. In a few laps my left part of the body was completely destroyed, so I could not fight for the podium. We managed to get some decent points and we are still in the leading positions in the championship standings. The top 3 is a little bit far, but we are still halfway into the season and anything can happen. We just need to stay calm. We have one week for the next race in Assen, so hopefully my body will recover a little bit, so that I can fight and hopefully we can be back on the podium.”

Sadly and through no fault of his own, John McPhee’s race at today’s German GP was ruined at the first corner. The British rider very cleverly kept his distance at the first corner but, with an out-of-proportion and out-of-control move, another rider missed the braking and literally pushed him out. John managed to stay standing in the gravel, but started again last, after accumulating a large gap.

John did not lose heart and tried to go back up the group, trying to reach the points. Unfortunately, a great gap had accumulated, and did not allow him to achieve this result, and he closed the race in nineteenth position. A real shame for John who has no fault for what happened.

JOHN MCPHEE :
“It was a real shame for the race to be collected by the accident of some drivers in the first corner. Luckily I managed to avoid crashing, but I was taken to the gravel. When rejoining I was like more than 20 seconds from the guys in front, so it was a long race, but I am happy with myself because I pushed every single lap to try and remain consistent and fast and get a better understanding of the track. It is true that we did not have the easiest weekend trying to find a great feel, but with the impact the rear tyre was hit and even this did not make things easy. I think we can take the positives, indeed we were very consistent through the race and we also managed to work with the used tires really well. My laps even at the end were more or less like in the beginning, so consistency is there! We just need to improve in a few small areas so as to we can get the results we are working towards.”